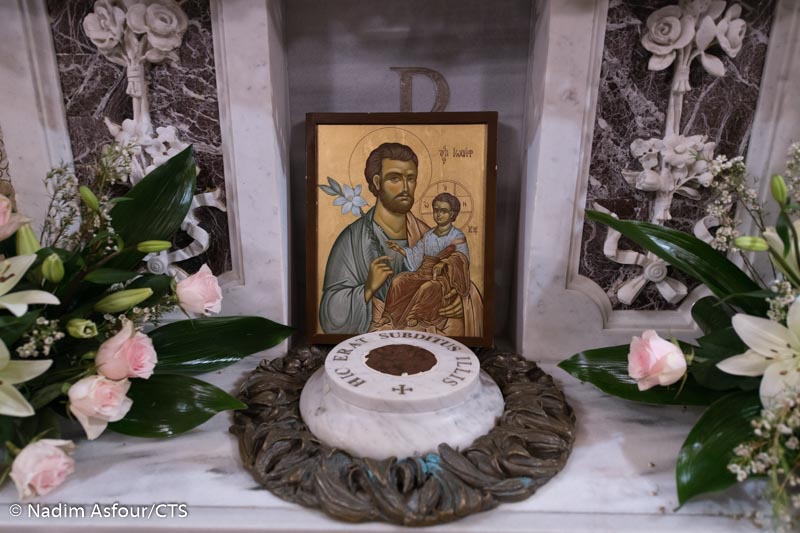 In the year that the Church is dedicating to St Joseph, and thanks to the easing of the local restrictions to deal with the pandemic, there was even greater enthusiasm for and attendance at the  celebrations for the solemnity in the Galilee city of Nazareth.
"From Nazareth we have joined the Pope,” commented Fr. Bruno Varriano, Rector of the Shrine of St Joseph and Superior of the Convent of the Annunciation in Nazareth. "In this year dedicated to St Joseph, we want to bear witness to the world the fatherhood that is revealed in him, that he lived in relation to Jesus and, consequently, to the whole of humanity."

It all started with the Triduum when Holy Masses were celebrated in three different languages  and were streamed live on the social media pages of the Custody. This is how the solemn celebrations of He who – as the Custos of the Holy Land, Fr. Francesco Patton, says -  “with a father’s heart” welcomed and loved Jesus the Son of God, made flesh by the Virgin Mary through the work of the Holy Spirit to be our Saviour.

The Solemn Entrance of the Custos, Fr Patton, into the church of St Joseph in Nazareth, on Thursday 18 March and the First Vespers afterwards started the celebrations for the solemnity of St Joseph. The Custos received the welcome from the parish priest of Nazareth, Fr. Marwan Di'des, in Arabic. "Our Franciscan tradition loves and worships the figure of St Joseph,” said the Custos in his speech of entrance “you are the fellow-citizens of St Joseph, you are the heirs of St Joseph.  It is important that we all know, like him, how to receive the Virgin Mary and the Child Jesus in our lives and in our homes,; that we can grow in our love for them, this way we will also be custodians of one another and of the Church itself."
The celebration of the Vespers was followed by the torch-lit Procession around the Basilica of the Annunciation during which St Joseph’s rosary was recited. The prayer came to an end in the Crypt of Nutrition, thus called because -  according to tradition – it is precisely here that Jesus lived until he was an adult,  learning his father’s trade.

The next day, on Friday 19 March, the Franciscans, the religious and a few laypeople came together in the solemn Eucharistic Celebration of the morning in the church of St Joseph. The celebration, presided by Fr. Patton, was also attended by the Apostolic Nuncio of Israel and Cyprus and the Apostolic Delegate of Jerusalem and Palestine, Mons. Leopoldo Girelli, who the Custos greeted in the introduction, emphasizing how, through him, the Universal Church was present and to which he invited those present to direct their prayers.
In his comment on the Gospel, Fr. Patton recalled the date of 8 December 2020, the day Pope Francis published the Apostolic Letter "Patris corde" with which he announced a special Year dedicated to St Joseph. The date was not chosen by chance: on the same day, 150 years earlier, the Decree Quemadmodum Deus was published, with which the Blessed Pius IX declared St Joseph Patron Saint of the Catholic Church.
"Here in Nazareth,” Fr. Patton continued, “we want to celebrate this feast-day in a particularly solemn way and throughout the year we will be proposing special initiatives of prayer, here and in Bethlehem too. We will let ourselves be inspired by how the humble carpenter of Nazareth welcomed the call of the Lord to take Mary with him as his bride  and welcome and bring up  the Son of God, Jesus, introducing him into the line of David.”

After the announcement of the celebrations, the Custos focused on the figure of the Saint. "St Joseph is a  genuine model of fatherhood for each one of us,” he commented. “Both for those who experience natural fatherhood in their families, and for those who experience a form of spiritual fatherhood in the Christian community.”
"Joseph is able to bring Jesus up,” Fr Patton continued, “because he knows the tone of firmness but also that of tenderness and in particular knows how to educate to be obedient because he practises it with trust. In this, Joseph is a model of educational fatherhood precisely because he is a just man, that is, he is always in search of the will of God, even when he does not fully understand the ways through which this will passes.”

In conclusion and with the singing of the litanies, those present in the procession moved towards the Crypt of the church. In the Grotto, at the altar, the Custos led the prayer of the consecration of the Custody of the Holy Land to St Joseph to then conclude with the  prayer of the Angelus in honour of the Saint.

Other Eucharistic celebrations followed on in the course of the day. The second Solemn Mass of Vespers in Arabic in particular, was attended by many local parishioners. 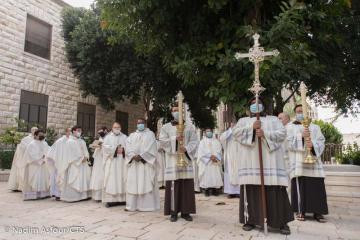 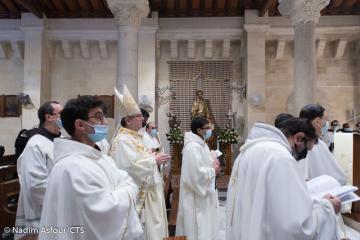 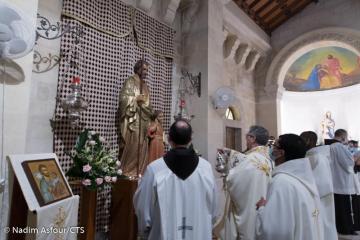 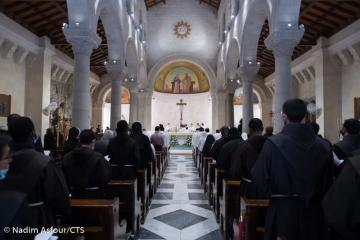 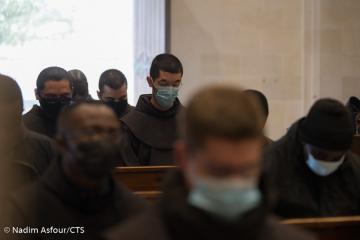 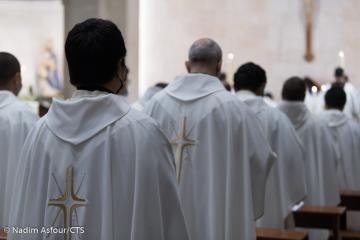 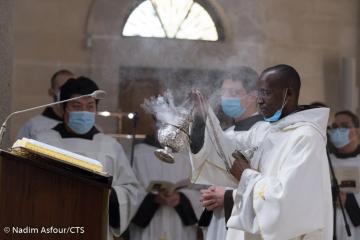 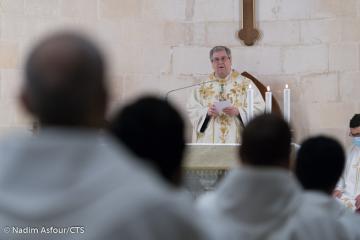 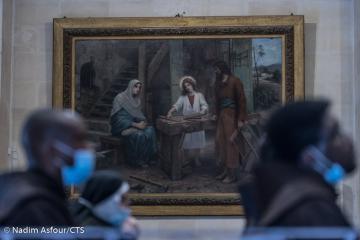 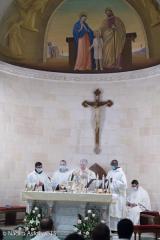 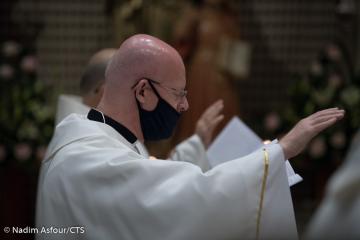 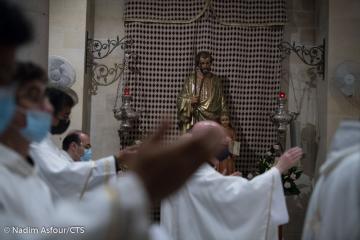 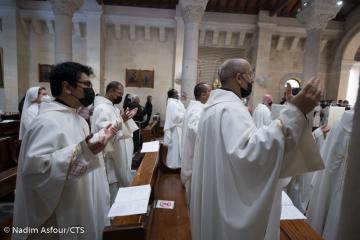 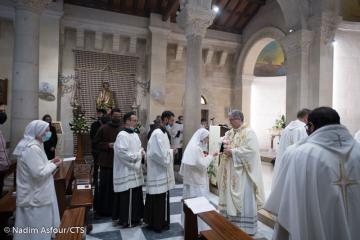 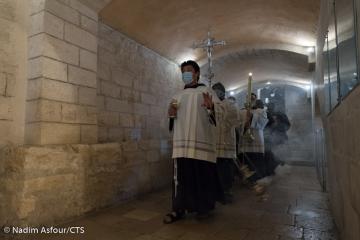 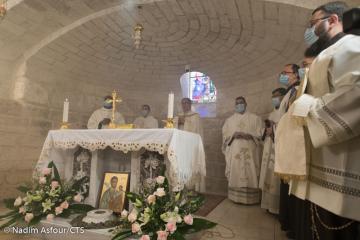 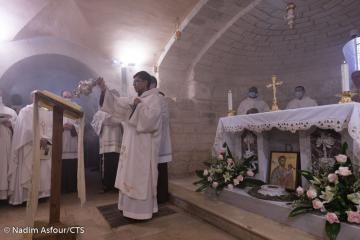 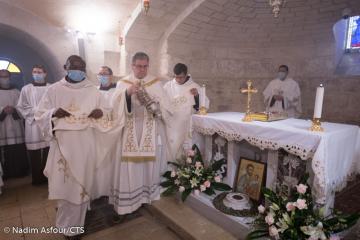 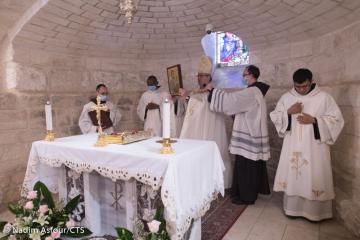 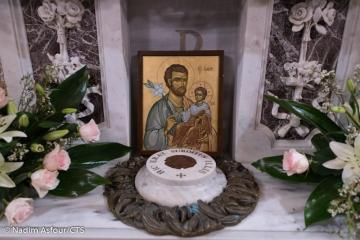