I rejoiced, when they said to me:

Let us go to the House of the Lord!.

And now our feet are standing

Within your gates, Jerusalem!

What is it about this city that it has such a great attraction?
What is it that makes a Christian pilgrim come to Jerusalem?

Jerusalem is the heart of the Holy Land, the synthesis of the action of God for the good of the whole of humanity.

John Paul II expressed this in very moving words: “How many memories and images and how much passion and great mystery surround the word Jerusalem! For us as Christians, it represents the geographical point of union between God and men, between eternity and history.” 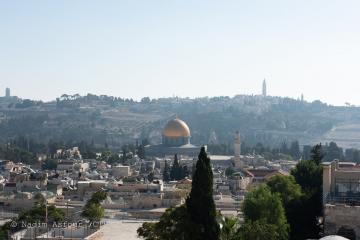 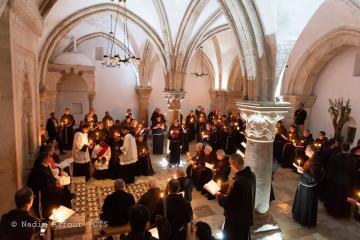 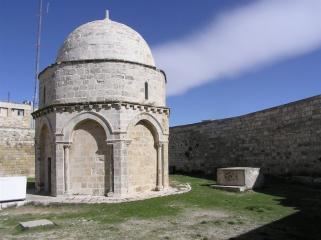 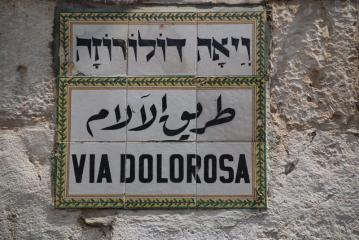 But to go on a pilgrimage in the Holy Land means setting off and turning the physical journey into a “path of the soul”.

Walking on this land with the heart, soul and mind for an encounter:

The pilgrim comes with an inclination for conversion 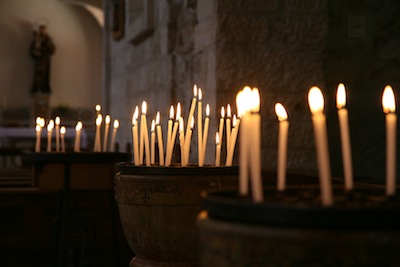 In antiquity, especially in the Holy Land, the pilgrimage had mostly a penitential function, also due in part to the difficulties that such a mission involved: long and difficult journeys, discomfort, political problems and so on.
Pilgrims were animated by very deep faith and were even ready to die, which sometimes happened in the course of their journey.
The pilgrimage was also an opportunity to expiate their sins, which was shown symbolically when they replaced their ordinary clothes by those of the pilgrim, the expression of their wishes.

Today, with the comforts of modern life, luxury hotels and fast means of transport, that external aspect of repentance has been lost and the pilgrimage is often converted into tourism, even for those go on it for strictly religious reasons.

The truth is that being pilgrims is no easy task.

The most important thing of the pilgrimage to Jerusalem is the interior decision to answer the call of the Spirit in a personal way, like a disciple of Jesus.

Therefore, the pilgrimage is also “a path of conversion”: the pilgrim has the chance to live out the experience of the prodigal son, he who knows sin, the harshness of the ordeal and repentance and the sacrifice of the journey, but who also knows the embrace of the merciful Father who leads him back to life (cf. Luke 15,24).

In this process of “life change” to be oriented towards God, participation in the sacrament of reconciliation will be required, where the pilgrim realizes his sin, confesses his faults and receives the grace and pity of the Lord.

In such a context, the encounter with the Holy City should start from the Mount of Olives, more precisely from the Sanctuary of Dominus Flevit, the place where Jesus wept over Jerusalem, deaf and blind to the Saviour and the symbol, for this reason, of our insensitivity: "If this day you only knew what makes for peace--but now it is hidden from your eyes. (Luke 19,41-44).

The pilgrim comes with an attitude of devotion

The pilgrim who comes to Jerusalem to pray and adore the Lord, confides in the fact that his prayer in the Holy Sepulchre will be particularly effective.

In this, the pilgrimage is a call and a preparation for prayer and can therefore take on various forms:

The symbolic place of prayer will be the Gethsemane, an intense and difficult plea as was that of Jesus: “He was in such agony and he prayed so fervently that his sweat became like drops of blood falling on the ground.” (Luke 22,44)

A fundamental experience of the pilgrim must also be listening, because “the word of the Lord [shall go forth] from Jerusalem” (Is 2,3).
The Holy Land is an integral part of the process of understanding the historic word of God, who impressed his tent in Jacob and took the inheritance of Israel, which became established in Zion, putting down roots in the midst of a glorious nation.

This word was converted into the Jewish flesh of Jesus and became Gospel, destined to spread, “starting from Jerusalem”, to the ends of the earth (Acts 1,8). All the territories of the Holy Land form the “geography of salvation” where God, through his son Jesus, made its history. The Holy Land is, according to the expression coined by Renan, the Fifth Gospel.

In the Holy Land, the pilgrim is in a privileged position to listen to the word of God, as these are the places where the word took shape. Paul VI said that the Holy Places are “the school where understanding the life of Jesus begin, or the school of the Gospel”, because they let the Christian make direct contact with the environment where “the Word became flesh and made his dwelling among us” (John 1,14). In the Holy Land the Gospel itself has a different echo.

The words of the “Russian pilgrim” fit both ancient and modern pilgrims: he said “by the Grace of God I am a man and a Christian, by my deeds a great sinner, by condition the humblest of pilgrims, a homeless person who wanders from place to place. My only property is a bag slung over my shoulder with a little dry bread, and under my shirt I carry the Holy Bible. I have no other belongings” (Diary of a Russian pilgrim).

The Bible thus has to be every pilgrim’s principal guide.

On his return home, the pilgrim becomes an evangelizer, a spokesman of the “Gospel of the Holy Land”– as Jesus and his disciples did when they travelled down the roads of Palestine announcing the gospel of salvation – he will be an “itinerant messenger of Christ”, repeating like Peter and John “It is impossible for us not to speak about what we have seen and heard.” (Acts 4,20).

The pilgrim ready to meet Christ alive in the Eucharist

If the Bible is the pilgrim’s book par excellence, “the Eucharist is the bread that feeds him on his way”.

The celebration of the Eucharist accompanies the various stages of the pilgrimage, because it has to reflect the Paschal events of the Exodus, but above all the Easter of Christ, at the end of his long journey towards the cross and glory.

It is only in this way that the pilgrimage will bear its fruits.

As John Paul II also said, “Each pilgrim, at the end of his journey in which his ardent heart aspires to see the face of God, is called to recognize the Saviour …in the shared bread”.

Hence the ardent desire of the Pope to visit the Cenacle “to celebrate the Eucharist.

It was here that Jesus instituted the ministerial Priesthood… In this holy place he promulgated the new commandment of love. I wanted to return as the successor of Peter, to the sources of the Church, in the place of the Last Supper and the First Eucharist”.

This place was sadly forbidden to Christians with the expulsion of the friars from Mount Sion, in 1551, and even today the celebration of the Eucharist is impossible there.

The pilgrim ready to meet Christ in his brothers

Like the disciples of Emmaus who, thanks to their charitable insistence, received the gift of seeing Christ risen: “As they approached the village to which they were going, he gave the impression that he was going on farther. But they urged him, "Stay with us, for it is nearly evening and the day is almost over." So he went in to stay with them. ” (Luke 24,28-29), the pilgrim will also obtain the fruits of his journey only if it is animated by charity.

Charity is revealed first of all as God’s love: “Beloved, if God so loved us, we also must love one another.” (I John 4, 11)

Charity must therefore be put into practice during the journey, helping those in need, sharing food, time and hope.

Charity is also practised in offerings to the poor and in helping invalid pilgrims.

The primitive Christian community had “only heart” and St. Paul helped “the poor of Jerusalem” making a collection for them.

It is only with these attitudes of the soul that the pilgrim will have the chance to meet Christ in the Holy City.

This encounter is the very reason of the journey to Jerusalem, as well as the dream of every Christian. Only this way can we return to the roots of Christian life.