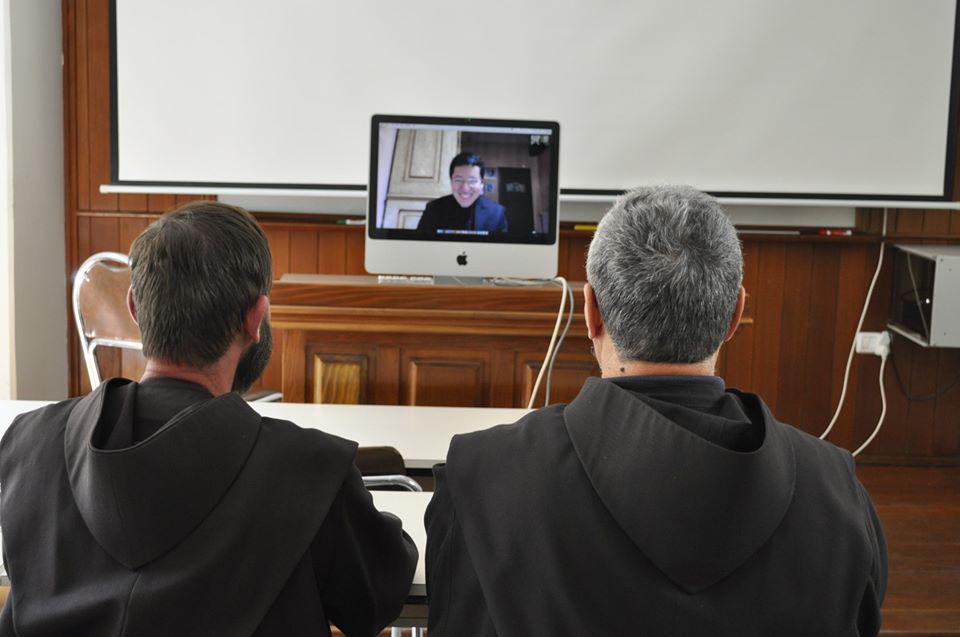 The Studium Biblicum Franciscanum is a scientific institution for research and academic teaching of Sacred Scripture and archaeology of biblical countries.

It was conceived by the Franciscan Custody of the Holy Land in 1901 and has been operating continuously since 1924.

But even the now centuries-old institution based at the Convent of the Flagellation had to introduce adaptations never imagined before.

"I have been living here for more than 42, 43 years and the teaching started precisely 40 years ago: January 1980...and so this year I had the joy, and also the surprise, to conclude my teaching with a course on the Lucanian work - that is, the third Gospel, the Gospel according to Luke, and the Acts of the Apostles - with which I began precisely 40 years ago. The surprise was to hold some of the lessons having the students in the classroom, and some having them on Skype."

The SBF keeps its doors closed but its activities continue at full speed thanks to the online lessons. A challenge for teachers and students.

"We made decisions gradually, as we became aware of the seriousness of the epidemic. Of course, having the student in the class is quite different: at least as far as I am concerned, even for the subject I teach, I prefer to have a more lively direct relationship because I can ask questions. You can do the same thing online, but it takes much longer."

In its teaching activities, the SBF pays particular attention to the biblical languages: Hebrew, Aramaic, Greek...

"Online Hebrew lessons require you to have a text, both for me and the students, in your hand and under your eyes so that you know exactly what you are doing. Thank God you can also teach languages with these new digital systems, and I must say that I am quite happy."

"With the online lessons, I didn't have any difficulty. Of course, you have to start with the fact that the lesson is different. But you have the possibility to have the same tutoring, the possibility to watch the professor, the same possibility to be followed by him. Clearly there is a lack of contact in the classroom, there are some things that need to be organized in a different way. But surely the quality hasn't gone down, in fact, in some aspects, we can even say that the quality has gone up. This is also very much down to the professionalism of the teachers, their competence and the way they have approached this new situation."

But the changes don't end here.

"In the last three days, there have been three thesis discussions, one of which took place here - because the professors and the student are guests here - and two online, and they went very well. So there is this response from us... of course, we hope that this situation will resolve itself as soon as possible."

On Tuesday 21st April, the student Federico Claure discussed his thesis on Biblical Sciences and Archaeology. Commission: Pazzini - Geiger. This is the first discussion that, due to the health emergency caused by Covid-19, was held online: the commission was in Room III, while the candidate was connected from Assisi.

This thesis discussion also took place online, with Professor Demirci connected from his convent and the candidate connected from the ruins of the ancient synagogue of Magdala, a perfect setting for the content of the thesis being discussed. And, on Brother Eugenio Alliata's face, you could see his satisfaction...

"That was really unexpected. But it was a beautiful possibility thanks to Providence. I talked about the function of the synagogue in the first century, and I was lucky to be able to do so from a synagogue of the first century, here in Magdala: the project developed here, together with the professors and the courses I took at the Studium Biblicum, inspired me for my thesis...it was truly a gift from Providence."

"Two days ago we did the first online thesis and I was a little worried about its success... we were worried about the quality of the images, the audio, the video. It was actually a very nice result. We managed to do a very normal procedure, we even took the final picture: the two professors - the director/moderator and the thesis supervisor - and in the middle the computer screen, where the student was."

"It was a shocking surprise in some ways, I would never have imagined it. However, I was surprised to see how especially the young people, the younger members and even the students, were able to adapt."