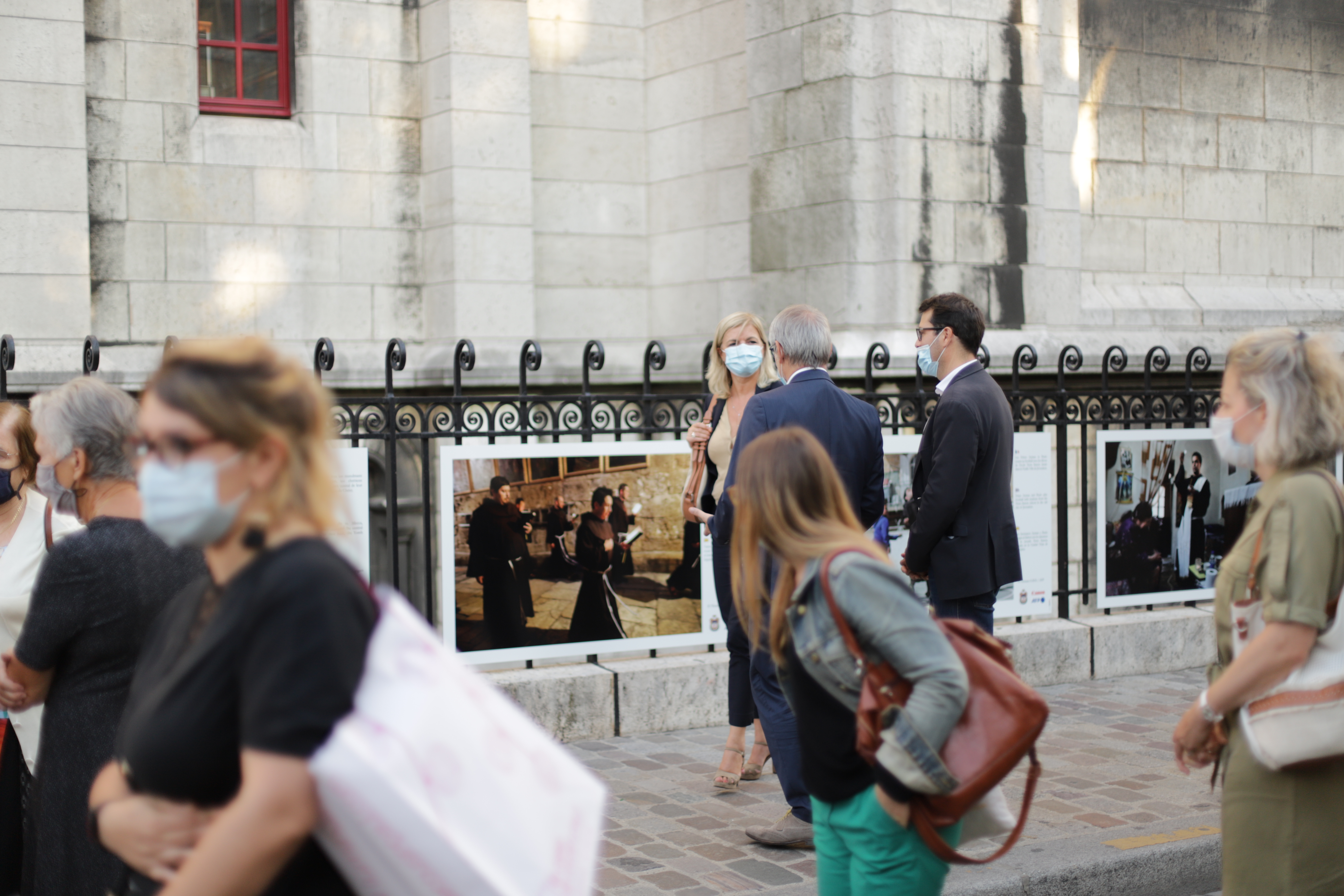 Every year, more than ten million tourists visit the Basilica of the Sacré Coeur in Paris, the second most visited place in France after the Cathedral of Notre Dame.  As the Sacré Coeur closes the celebrations for the jubilee of one hundred years since its consecration, an exhibition for the general public is hosted for the first time on its railings. Twenty-nine photographs are on display, taken by  Thomas Coex, who was head of the photography department of the press office of the Agence France Presse (AFP) in Jerusalem from 2014 to 2019.

"A part of this work had already been displayed at the Curia of St. Saviour’s Convent in Jerusalem in June 2018. At the time, the Commissariat of the Holy Land of Paris had expressed the desire to host the exhibition. After more than a year’s work, this project has at last become reality. It is a great joy for the whole of the Custody and I will never be able to thank Thomas enough for his energy and his commitment. This place is not only prestigious, but it is above all a place of prayer. I hope that the tourists and the French people who see the exhibition will carry in their prayers the Christian presence in the Holy Land,” said Fr. StéphaneMilovitch, in charge of the department of Cultural Heritage of the Custody of the Holy Land, who took part in the inauguration.

Thomas Coex, the author of the exhibition, cannot conceal his emotion. “In 30 years of working for AFP, I had never been able to work for such a long period on a single subject, which moreover had never been open before to the international press. This exhibition is a real conquest and I feel very privileged,"he said during the interview with the KTO television channel. "I have experienced the joy of getting to know the friars very well: I discovered humble and generous people who form a family, they are affectionate people. They give their time and their lives to others. Their educational and social actions brought me closer to them. I was surprised, I did not think I would have found such openness. This is the Church I like."

On this Thursday 10th September, FatherStéphaneEsclef, who has just been appointed rector of the Basilica, is also pleased: “Many people pass by the place where the photos are on display. A lot of tourists from all over the world will see them. I consider this exhibition like a spiritual twinning between the Holy Places and the Basilica of the Sacré Coeur in Montmartre. It follows on Pope Francis’s invitation to our Church to reach the outskirts of cities. Many tourists do not dare enter the Basilica. This exhibition is a message: the heart of Jesus must not remain confined inside the church. Photography can affect the exterior of the person, but at the same time reveal something important in the life of those who believe."

As Julie, who stops for a moment in front of the photos during her jogging, says, “When I think of Jerusalem, I think of the Jewish world, but it’s true that there are Christians there as well." Nicolas as well, a young parishioner of the neighbourhood, commented, “We are not used to seeing Franciscans in Montmartre! When I see these photos I understand better why the Holy Father took the name of Francis, we see the concrete aspect of Franciscan life.”

The guestsat the inauguration, who numbered about two hundred, then went to the private gardens of the Basilica of the Sacré Coeur, exceptionally opened for the event. Figures from civil society. From the political and diplomatic world, religious and diocesan priests, knights and ladies of the Equestrian Order of the Holy Sepulchre, journalists, correspondents and photographers  were plunged into the atmosphere of the Holy City for an evening.

The exhibition “The guardians of Christ’s tomb” is free of charge and the photographs will remain on display until 13th December 2020.

Special thanks go to AFP and Canon for their cooperation on this project. 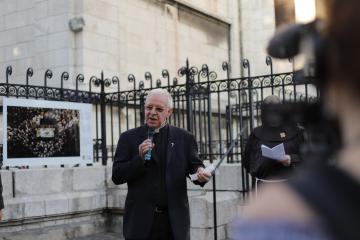 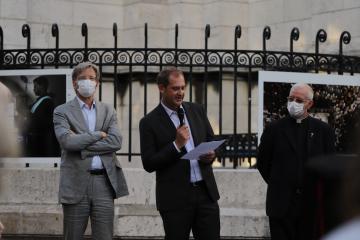 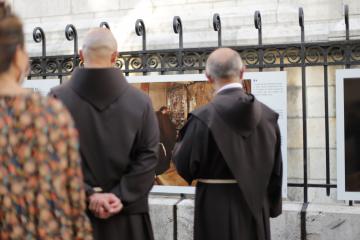 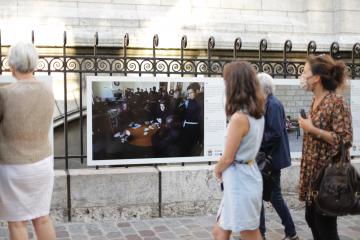 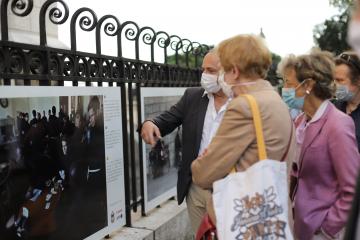 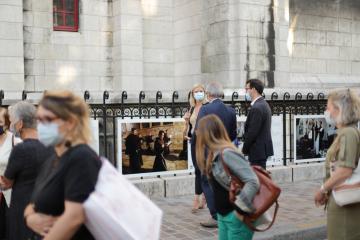 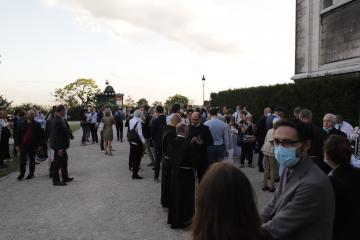 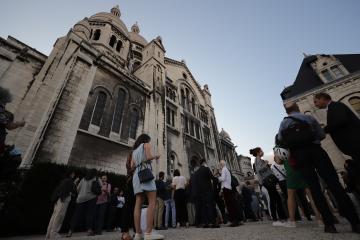 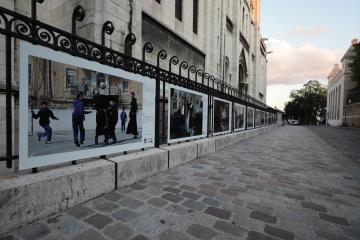 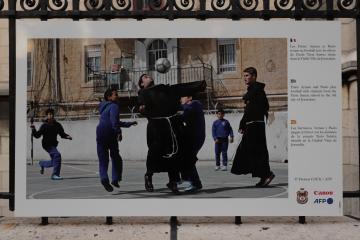 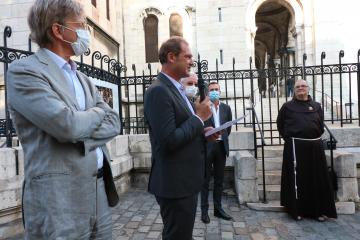 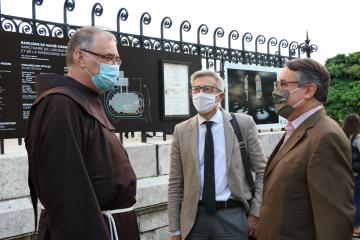 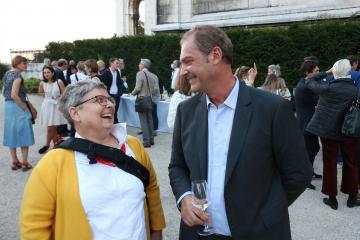 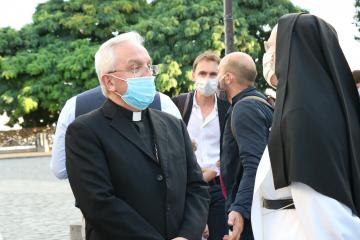 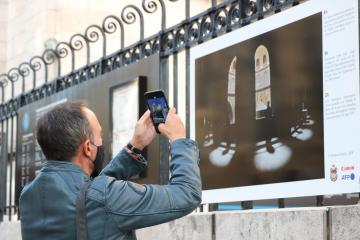 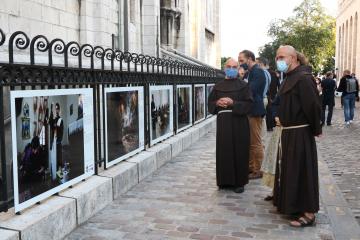 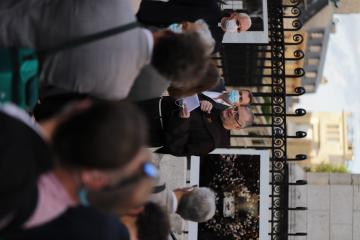