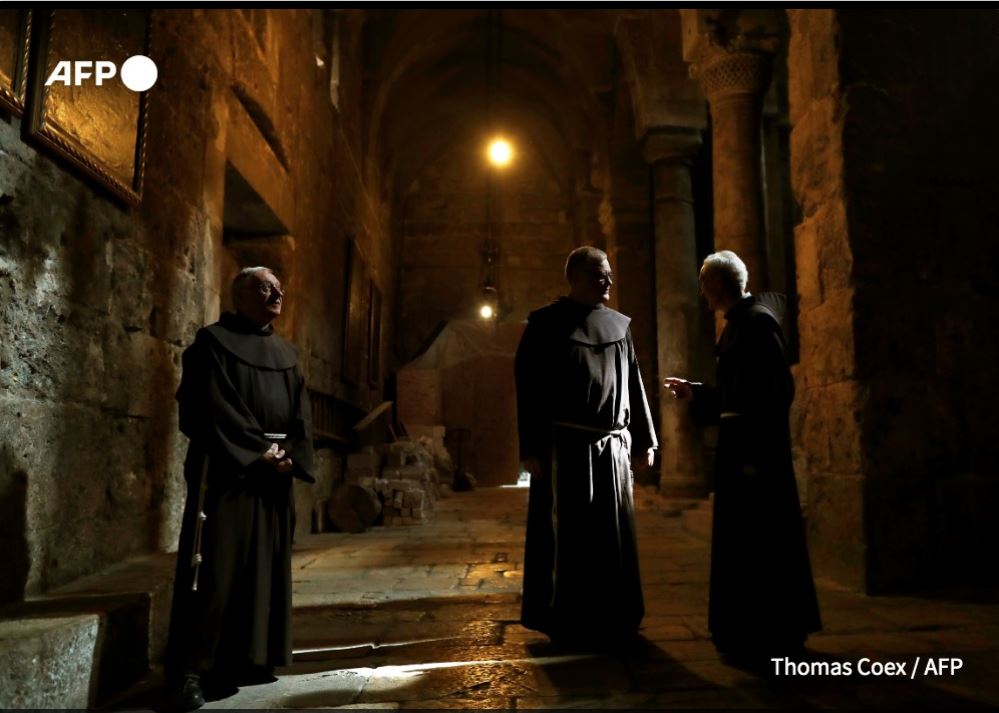 For the first time the Sacred Heart Basilica of Montmartre is hosting a photographic exhibition on its perimeter railings. ‘Custodians of the tomb of Jesus’ is an exhibition by the AFP showing the everyday life of the Franciscans of Jerusalem. It can be viewed from September 10th to December 13th 2020.

The Franciscan Friars agreed to open their doors for the first time to a photo reporter. Thomas Coex a photographer for the AFP in Jerusalem, accompanied them in their times of prayer, social work and leisure.

The 29 prints of the exhibition invite us to discover hitherto undisclosed scenes of the daily life of these catholic friars, faithful guardians of the tomb of Jesus for the last 800 years.

At the heart of processions in the Holy Sepulchre, in the refectory of the convent, during basket ball games with the pupils of their schools or in the infirmary where elderly friars are cared for, these images reveal a world where the sacred and the everyday cohabit harmoniously.

The exhibition has the full support of Canon. It has played a key role in the entire process, from the capture of the image – be it a photograph or a video, to the final print. Canon has participated in the photographing of this unique story and in it’s presentation at an exceptional venue.

Thomas Coex is a photo reporter based in Paris who started as a freelance collaborator for the AFP in Lille in 1987. He joined the permanent staff at the AFP headquarters in Paris in 1996. From 2001 to 2003, he went to their Jerusalem office as head photographer with responsibilities for Israel and the Palestinian Territories. He then returned to Paris as photographer and editor for France until 2014. There was an interlude of one year between 2008 and 2009 where he worked for the office in Caracas. From 2014 to 2019 he returned to Jerusalem as head of photographic services. In 2001 he was awarded the World Press Photo third prize in the ‘News Story’ category for photographs taken in Gaza during the second Intifada, and came second at the Bayeux Calvados Normandy Prize for war correspondents on the same subject.