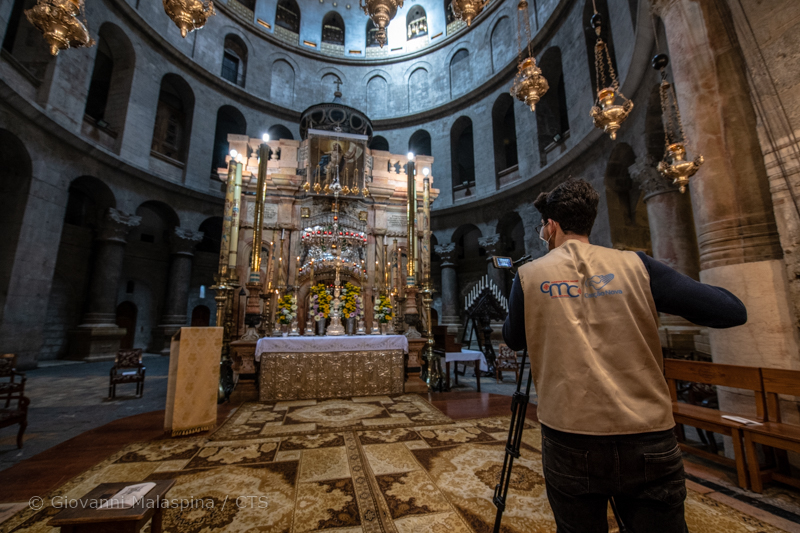 The Christian Media Center has increased the number of languages in which it produces its weekly news. The news from the multimedia centre of the Custody of the Holy Land, founded in Jerusalem in 2008, has recently reached a new public in Asia, thanks to the translations into Chinese and Indonesian. Through the web, the Land of Jesus, with all its spirituality and beauty, can reach even the countries that are the furthest away.

“We already published contents on our website in seven languages: English, Italian, Portuguese, Spanish, French, German and Arabic. To reach more people, we decided to increase the number of languages available,” says Cristiano Assunção, director of the  Christian Media Center. The idea came of adding Chinese to the site as well and to start a long job which was finished only a few months ago. The work was done by the Filial Daughters of the Immaculate Heart of Mary, a group of three consecrated women from China and called to the Holy Land by the friars of the Custody. “The Franciscans of the Holy Land wanted us here so that we could help them guide the pilgrimages of Chinese-speaking groups,” says the Mother Superior of the community. “Before the pandemic, many groups would come and there were not enough Catholics who could guide them in this land.”

The translation of the website started in 2019 and, despite the difficulties due to their commitments and the Coronavirus pandemic,  it was completed in October 2020 with the publication of the new language on the site of the Christian Media Center. Now the Chinese section can also count on the collaboration of Stanislaus Lee, a professional translator, while the sisters lend their voices for the videos.

In some parts of China the site is obscured, like  the Chinese Youtube channel, but the religious do not give up. “We want to spread news about the Holy Land in every way possible and so  for example we circulate it on WeChat, an application that is very popular in China,” explains one of the sisters. “Especially in this period of lockdown and quarantine, people are at home, they are working less, they pray to God and are famished for news about the Holy Land.” The Christmas videos, the masses from the Holy Places and the ordinary contents have been greatly appreciated and have also been viewed from other places where Chinese is spoken, such as Malaysia, Singapore, Korea and Hong Kong.

“I started to publish  the first videos in Indonesian on YouTube, translated from the Christian Media Center in December 2020”, says Fr. Theodorus Beta Herdistyan, an Indonesian friar in service in the Nazareth convent. In previous years, the friar had already had his own Youtube channel in which he explained some aspects of the Holy Land and the shrines to Indonesians. In November he started his systematic service of translating the videos of the Christian Media Center, which are then shared on Facebook and on an  Instagram profile dedicated to the Holy Land. “In Nazareth I am chaplain of a group of Filipino immigrants who are here and in Afula. Before the pandemic I used to guide groups of pilgrims and exactly one year ago I had the last group,” the friar explains. A missionary in the Holy Land since 2013, Fr. Theodorus says that many people asked him for news about the Holy Land. This is how he started his work on the web, in collaboration with other Indonesian friars.

In less than two months, the Youtube channel already has almost a thousand registered viewers, thanks also to the work of promotion by the Commissariat of the Holy Land of Jakarta. “Many Indonesians would like to come here, but they can’t, especially in this period of the pandemic,” says Fr. Theodorus, “so sharing these videos becomes a way of taking the Holy Land there and making it known.”