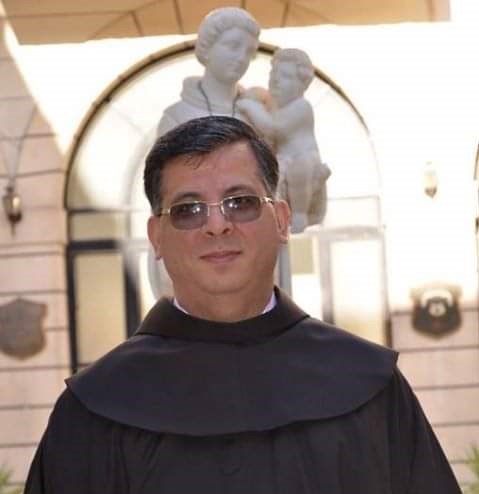 Fr. Raimondo Girgis is a Friar Minor of the Custody of the Holy Land. He was born in Damascus, Syria, on 6 January 1967. He received the Franciscan habit at Santa Maria degli Angeli – Assisi (Italy) on 25 August 1988, from the hands of the then Minister-General, Fr. John Vaughn OFM. He spent the year of his novitiate in Giza in Egypt where, on 29 September 1989, he was able to make the first profession. On 18 October 1992, he made his solemn profession. On 27 December of the same year, he received diaconal ordination and on 23 July 1993, he was ordained a priest, after having completed his theological studies at the Studium Theologicum Jerosolimitanum.

Fr. Raimondo was awarded a degree in Oriental Canon Law  by the Pontifical Oriental Institute in 1997 and a Ph.D. in 2002. He has carried out various services of government and animation as Deputy Minister of the St Paul Region (2013-2016), as Guardian and local Superior and as a formator, of a pastoral nature, in particular as a Parish Priest and he is currently Vicar General of the Apostolic Vicariate of Aleppo of the Latins. He is also a member of the Episcopal Family Commission in Syria. Between 2008 and 2011, he was a member of the Board of Caritas Syria.

Over the past few years, Fr Raymond has also published several books on oriental canon law in Italian and in Arabic.

In Italian he has published his Ph.D. thesis, “I Matrimoni misti nelle situazioni particolari delle Chiese Patriarcali Cattoliche in Siria, Libano, Giordania e Egitto” (“Mixed marriages in the particular situations of the Catholic Patriarchal Churches in Syria, Lebanon, Jordan and Egypt”) (2002) and in the Collectanea Orientalia (vol. 44, 2011) a juridical study on: "Il Clero coniugato nella legislazione antica delle Chiese orientali" (“Married clergy in the ancient legislation of the Oriental Churches”).

He has also published a number of articles in different scientific journals in Arabic and in Italia. He has taken part in international conferences on Oriental canon law in Lebanon, Jordan and Iran, presenting a number of studies.