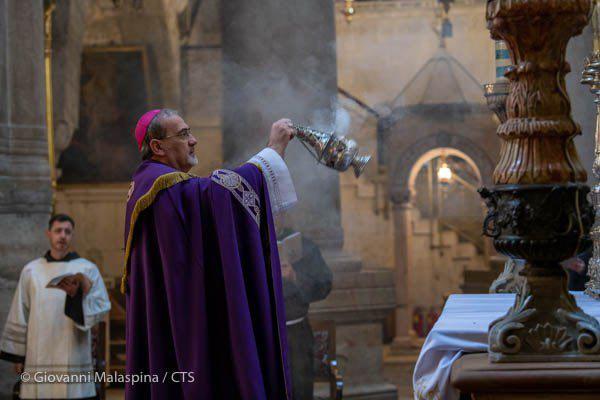 Holy Thursday in Jerusalem began with the sound of the bells of the Holy Sepulchre, which will be silent until the Easter Vigil. In the Church of the Resurrection this morning, Mons. Pierbattista Pizzaballa, Apostolic Administrator of the Latin Patriarchate of Jerusalem, presided the celebrations of Holy Thursday. Despite the health emergency and the restrictions, the liturgies in the Holy Sepulchre continue to be held as normal, thanks to the Franciscan friars who live there, and the few people admitted to the rites of the Triduum, together with the Bishop.

The colours of the sacred vestments marked the various parts: for the prayers of the liturgy of the hours, the celebrants wore Lenten violet, to then put on the white vestments for the Messa in Coena Domini. This year, as in many other dioceses, the Chrism Mass was not celebrated with the blessing of the oils, as it was impossible for the local clergy to take part.

“The following question runs through the whole of John’s Gospel: where does this man come from and where is he going? The question is about the identity of Jesus,” said Mons. Pizzaballa in his homily. “(...). Well, this mystery is revealed to us in today’s Gospel: “It was just before the Passover Festival. Jesus knew that the hour had come for him to leave this world and go to the Father, … Jesus knew that the Father had put all things under his power and that he had come from God and was returning to God” (13,1.3). The place where Jesus is going and which he is also preparing for us, is revealed here in full: He comes from the Father and returns to him and this is how he also wants it to be for us.”

The Apostolic Administrator of the Latin Patriarchate then dwelled on the importance of Jesus’ gesture of washing the feet, a symbolic gesture that this year could not be repeated, due to the health precautions: “The gesture that Jesus makes is the gesture of the passage between the earth and heaven, between the world and the Father, the temporal and the eternal. To show the way that leads to the Father, Jesus washes his disciples’ feet.”

Mons. Pizzaballa also referred to the present situation of restrictions which have affected people, depriving them of many human relations: “We could say that the Lord has taken them away from us, to then return them to us purified. Perhaps the Lord wants to purify us of our possessive and violent relations, he wants to tell us that we can choose to support each other or be selfish, thinking only of ourselves. The isolation and loneliness of these past days can teach us that it is possible to change direction, taking a path of conversion, understood as a return to listening to the Word of the Lord.” (The complete homily is here).

In the afternoon, due to the current situation, the traditional pilgrimage to the Cenacle was not held, where the Custos traditionally washes the feet of the children of the Parish who will this year receive confirmation, followed by the visit to the Armenian and Syriac Churches. Instead, Fr. Francesco presided the Mass in Coena Domini of the St Saviour community. In the homily (here) he emphasized Easter as the liberation not only from slavery but also from death, the gift of the Eucharist as a “medicine of immortality” and the fact that every ministry in the Church but also every service in the world has to be done in the logic of Jesus who washes his disciples’ feet and in the perspective of the new commandment. In the homily there was naturally also a reference to the current situation.

On the evening of Holy Thursday the Holy Hour of Jesus is celebrated in Gethsemane in Jerusalem. During the Holy Hour, presided by the Custos of the Holy Land, Fr. Francesco Patton, the faithful were invited to meditate on the moments of the Passion of Jesus, to enter death with him and then to be able to pass to the resurrection of Easter. In his introductory words, the Custos recalled: “We know that at this particularly difficult time for the whole of humanity, many of our brothers, like Jesus on the night of the first Holy Thursday, are experiencing anguish, are sweating blood and are living the hour of their agony, of their fight to continue trusting the Father and to put themselves totally in the hands of the Father, just like Jesus and together with Jesus.

We also pray, with Jesus: “Abbà! Father! Everything is possible for you. Take this cup from me! Yet not what I will, but what you will” (Mark 14,36). A special prayer was included in the intercession for all those who are suffering the consequences of this pandemic, “So that God the Father may grant health to the sick, strength to the healthcare personnel , comfort to the families and salvation to all the victims who have died.” 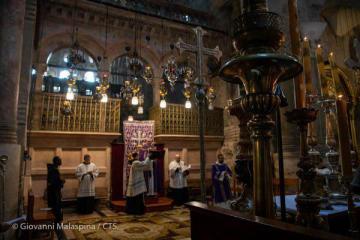 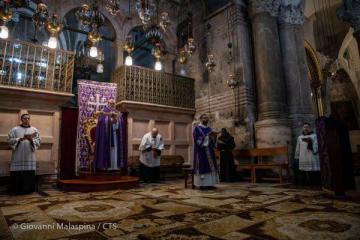 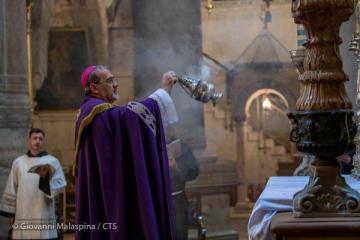 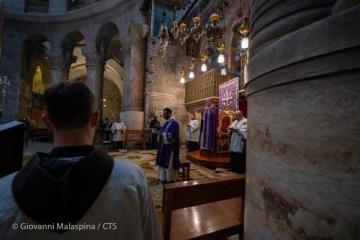 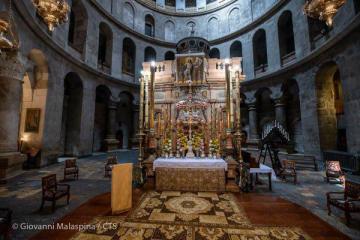 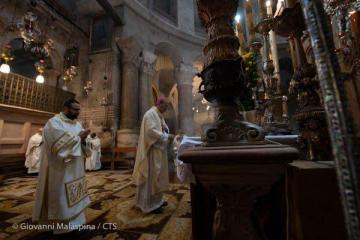 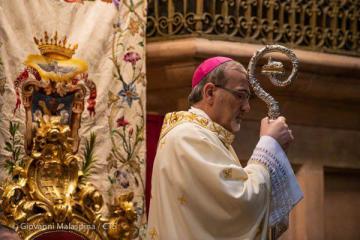 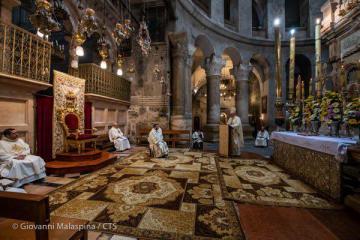 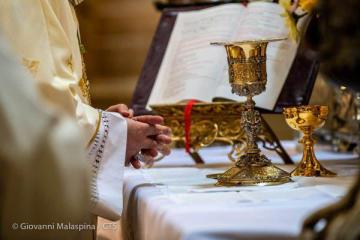 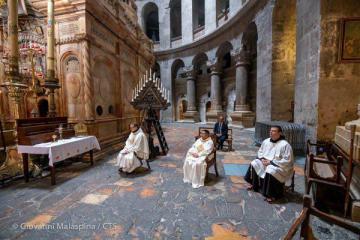 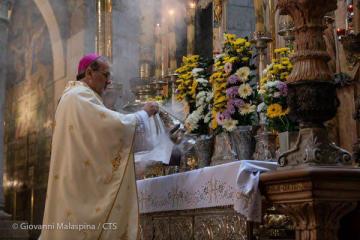 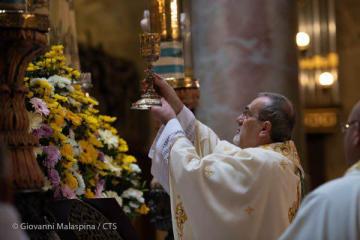 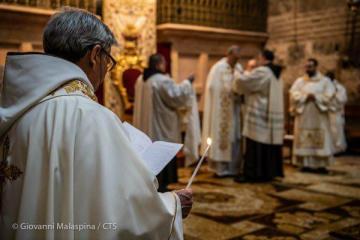 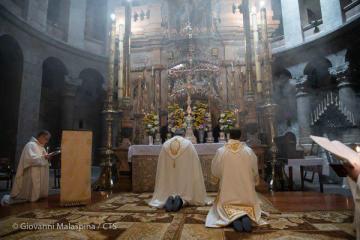 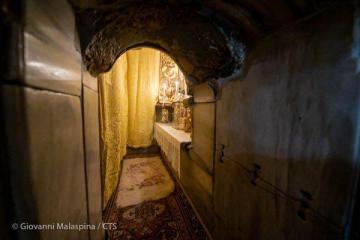 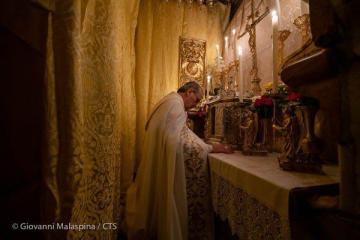 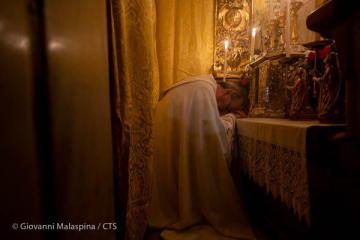 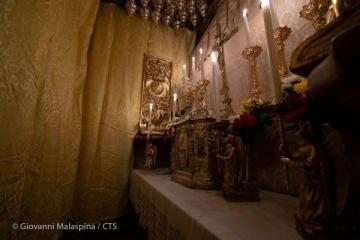 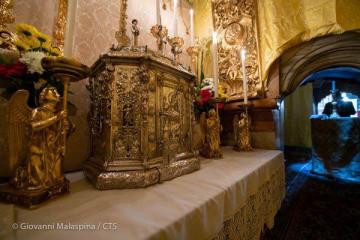