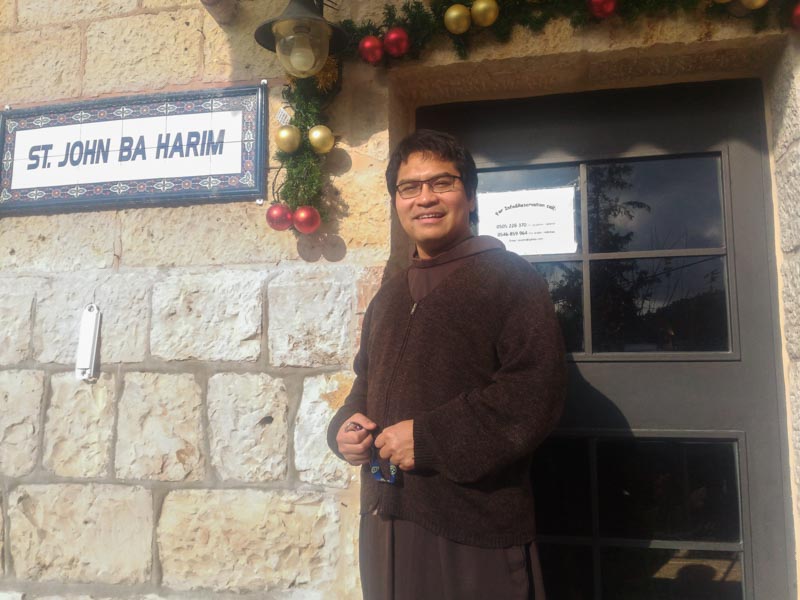 They come from different parts of the world and have different charismas. The friars of the Custody of the Holy Land are at the service of the Holy Places, the Church and the local people. One of them is Fr. Jordan Melanius  Sesar, who was born in Indonesia and who does his service as master of the students of philosophy at the convent of Ain Karem. He told us about his personal experience encountering the Holy Land and his life in the brotherhood.

How did your relationship with the Holy Land start?
I entered the Order of Friars Minor when I was nineteen, but I had begun my journey four years earlier,  at fifteen, in the minor seminary. I studied theology and philosophy after the Novitiate. It was then, when I was still a deacon, that I was appointed Deputy Commissary of the Holy Land for my province of Indonesia. In 2007, I went on my first pilgrimage and from then on I started guiding groups in the Holy Land.
The Franciscans have always played an important role in Indonesia, if you think that they were the first to translate the Bible into Indonesian and a Biblical Institute still exists.

From Indonesia to the Holy Land: what is the impact on the pilgrims?
The Indonesians are really pleased with the presence of the friars in the Holy Land. When I guide groups, I show them the daily procession at the Holy Sepulchre, the prayer of the Angelus in Nazareth and I tell them about the activity of the Franciscans. The pilgrims want to know more about the lives of the friars and the Bible. And we want them to experience the Bible as a spiritual experience.

How did you come to serve the Custody in the Holy Land?
In 2010 I became a friar at the service of the Custody. After six months in Montefalco to learn Italian with the postulants, I was sent to Nazareth and I worked with the Shalom community.  I worked in leading the liturgy, confessing and as assistant sacristan at St Joseph in the Basilica of the Annunciation. The guardian Fr. Bruno then asked me to continue my studies. I spent three years at the Alphonsian Academy for a degree in Moral Theology. On my return, I was appointed deputy master for the aspirants in Bethlehem, until arriving at  Ain Karem as master of the students where I am now.

What is life in the Holy Land like?
The Holy Land is a very different world from the one I knew. In Indonesia we are used to contact with people, including people who are different from us. On my mother’s side, the family is Muslim, but we have a good relationship, on the day of my ordination all my Muslim relatives came to the church. Muslims, Christians, Buddhists and Hindus live together. Here, on the other hand, it is a little different and in the past the friars sometimes lived only within the four walls of the convent, although now things are changing. This is why it is important to have an all-round vision of the Custody and that we can learn a local language.
Here at Ain Karem we work in a community. The community supports our life and if there are any problems, we talk about them.

What does the task of master of the students consist of?
During their formation, the friars of the Custody also spend a period of discernment for the vocation. Three indicators are identified in the Ratio Francescanis: human life (psychology, the relationship with others, habits and discipline), Christian life and Franciscan life. We work on these three areas, evaluating whether the friars can continue or not with their formation. We do so through personal interviews and with a monthly programme, different for the first and second year.
In addition, I introduce students to the Franciscan life, so that they can understand what the friars are doing in the Holy Land. I always tell the students however that they have to follow in the footsteps of St Francis and not the friars’.

What is life at Ain Karem like?
It is a different from the life I had in the past. I am here out of obedience, which I see as a time to open my heart and mind. In my convent there are twenty of us now from different countries: Poland, Mexico, Colombia, Ecuador, Italy, India and Syria. We are often asked if we are able to communicate with one another and we can, because the key is opening the mind and the heart.
We also have a psychologist we meet once a month to deal with the human aspects of our life. We have to be careful with using social media and using the phone correctly. This is why, in our house, it is not allowed to use the phone in the refectory, which is the very place where we are together and talk.

What is the best thing about being a friar in the Holy Land?
Being able to learn from the pilgrims, who at times pray far more than us. They are an example for us because they come from far away, making many sacrifices and when they arrive here, they pray. We who live here, on the other hand, we do not consider that we are in the place where Jesus was born or where St John was born.
The pilgrims also enrich my spiritual life, telling me about the grace they receive during the pilgrimage. These are simple things that I have to learn to receive and share. This is why with some friars we have made videos in Indonesian, which we have posted on You Tube. We want to encourage all pilgrims - from Indonesia and not – to come to the Holy Land on a pilgrimage.

The Custody of the Holy Land celebrates St Francis of Assisi