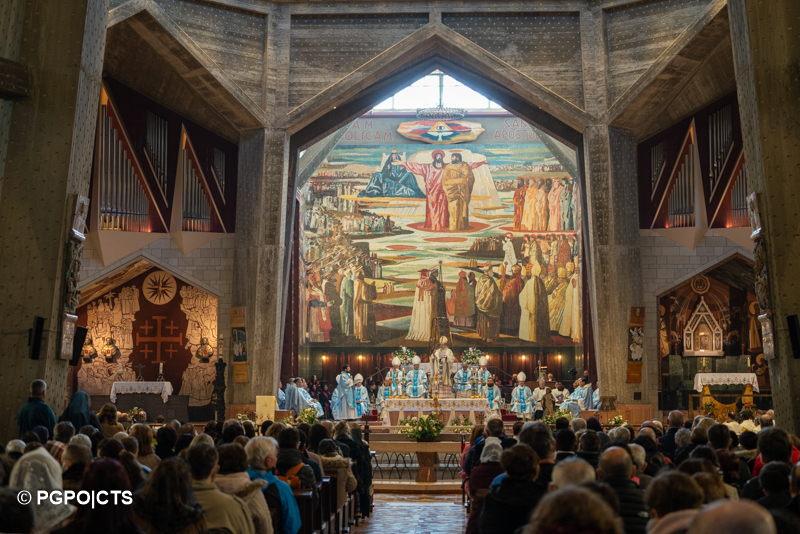 The solemnity of the Annunciation was celebrated on Thursday 24 and Friday 25 March at the shrine which commemorates it in Nazareth. The various celebrations were presided over by the Patriarch of Jerusalem of the Latins, His Beatitude Pierbattista Pizzaballa.

Nazareth is the city that guards the place and the memory of the meeting between the Archangel Gabriel and the Virgin Mary (Luke 1, 26-38). The excavations by Franciscan friars have identified the area occupied by the ancient village, which medieval and modern urbanization incorporated into the vast present-day Nazareth, and it was exactly on this site that the Basilica was built. The present-day Basilica of Nazareth was built between 1960 and1969 and was consecrated on 25 March 1969. Designed by the architect Giovanni Muzio, it was built in reinforced concrete with the outer facing in local stone.

The interior of the Basilica is made up if two churches, one on top of the other: the upper church and the lower one. The first one, dedicated to the Virgin Mary, has mosaics, paintings and frescoes which – repeating the mosaics of the outer naves -  show the different representations of the Virgin Mary in different countries in the world; the lower church contains the grotto where, according to tradition, the Holy Family lived for a long time until Jesus moved away to start his work of evangelization.

The celebration was divided into different parts: the solemn entrance and the First Vespers, on Thursday afternoon, followed by the evening vigil, and the celebration of the Eucharist the next morning.

As per tradition at this shrine, the solemn entrance began with a long procession towards the square in front of the Basilica. There, the Patriarch, his Vicar Mons. Rafic Nahra and a delegation from the Latin Patriarchate including several seminarians and some priests, were welcomed by a delegation of Franciscan friars led by Fr. Bruno Varriano, superior of the Franciscan convent of the Annunciation. After the aspersion and the incensement, the delegation went inside the Basilica where Fr. Marwan Di’des, parish priest of the Latin parish of Nazareth, welcomed the Patriarch on behalf of the local faithful.

The two delegations, the Franciscan one and the diocesan one, then went to the upper part of the Basilica for the celebration of the first Vespers.

In the evening, as the tradition has been for the past few years, there was a moment of prayer and reflection guided by the Superior, Fr. Bruno Varriano, divided into two parts: the first, focused on the Word, and the second, focused on the Eucharist and the adoration.

The next morning, His Beatitude Pizzaballa presided the eucharistic celebration of the solemnity. There was a large attendance in the Basilica, with the local Christians, the religious and pilgrims filling the upper Basilica of the Annunciation, to the great joy of the Patriarch.

Mons. Adolfo Tito Yllana, Apostolic Nuncio in Israel, the bishop elect Mons. Rafic Nahra and other bishops, as well as the local clergy were also present.

“Here in the Holy Land, we know what war is, how it enters the hearts of people and becomes a way of thinking, creates deep divisions and frustrations, erects physical and human walls, destroys prospects of trust, vision and peace,” said the Patriarch introducing his homily, referring to the act of entrusting the Russian and Ukrainian peoples to the Immaculate Heart of Our Lady, which is what Pope Francis will do today. “It is exactly for this, because we know what all this means and we have experienced it at first hand, that we will pray for those peoples, for their rulers and above all for the children of the Gospel, the mothers, the children and the elderly who have lost their homes, are alone, at the mercy of incomprehensible violence, dictated by short-term human calculations and without prospects. May the Virgin Mary of Nazareth, who becomes the Mother of Jesus here, intercede for them and for the many who in the world are suffering the same situations.”

During his homily, the Patriarch spoke of the situations of conflict in the world and in everyone’s daily life, opening the way to the culture of reciprocal listening which – as Mary teaches us  - if supported by faith and love, can bring settlement. “The world today needs men and women who still have the courage to wager on God and therefore to be committed to the life of the world, like Mary, Joseph and so many others in history, and who do not fear the dangers of evil and sin” His Beatitude commented. “We need the Church, which is the place of the presence of the Word: that gives it to the world with love, operating for justice, becoming the voice of the poor, capable of hearing the cry of all those, in Ukraine, in Russia, in the Holy Land and in the rest of the world are waiting for a word of truth and gestures of justice. A Church, in short, that can defend the rights of God, that are also the rights of man.”

A second part was the reading of the Papal act of consecration of the Russian and Ukrainian peoples to the Immaculate Heart of the Virgin Mary, which took place in front of the statue of Our Lady.

At the end of the celebration of the Eucharist, the Patriarch gave the apostolic blessing with the attached plenary indulgence granted by Pope Francis on the occasion of the solemnity. 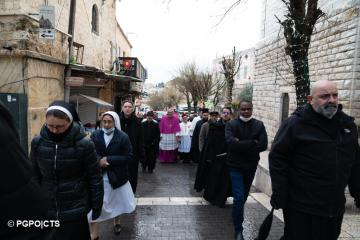 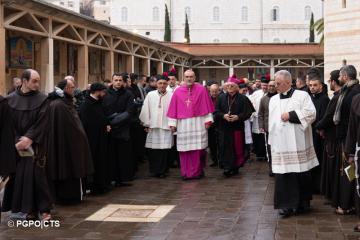 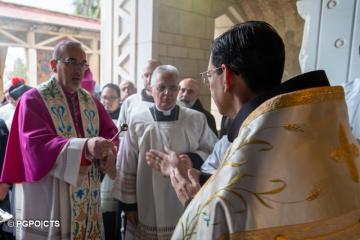 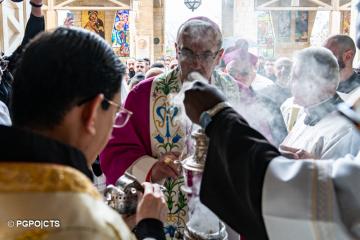 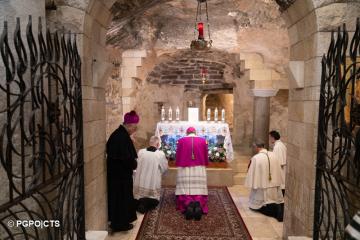 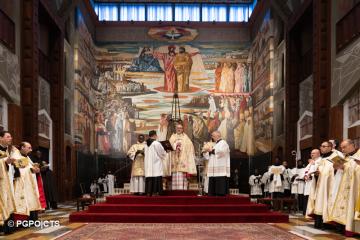 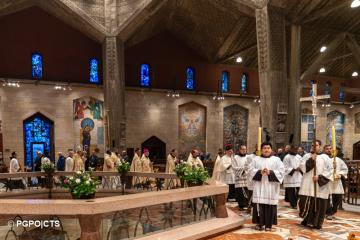 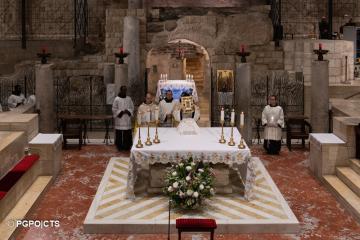 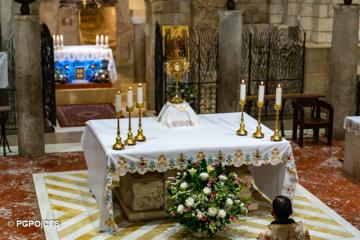 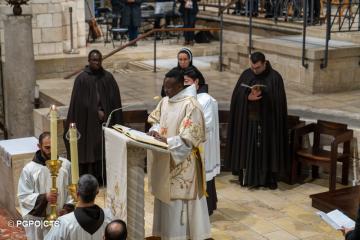 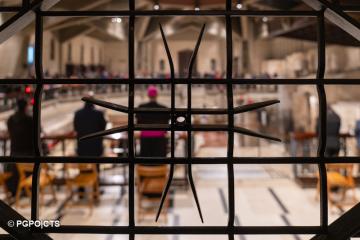 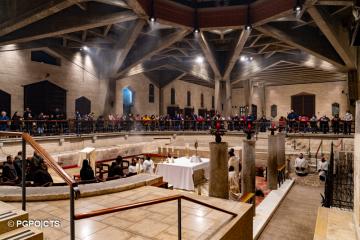 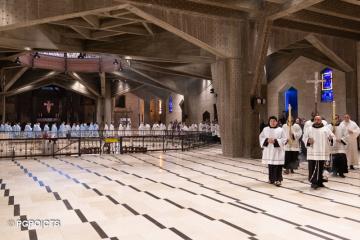 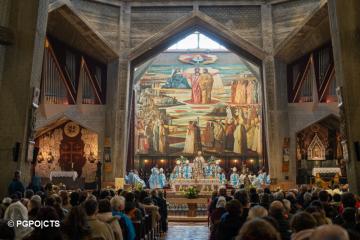 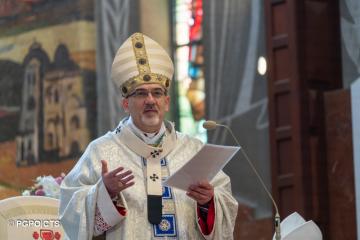 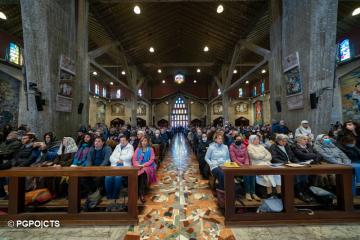 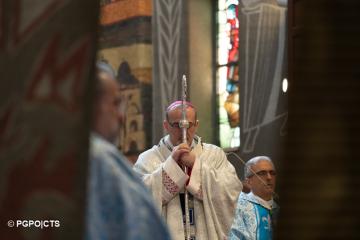 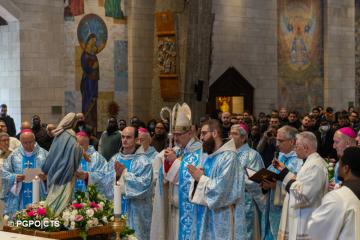