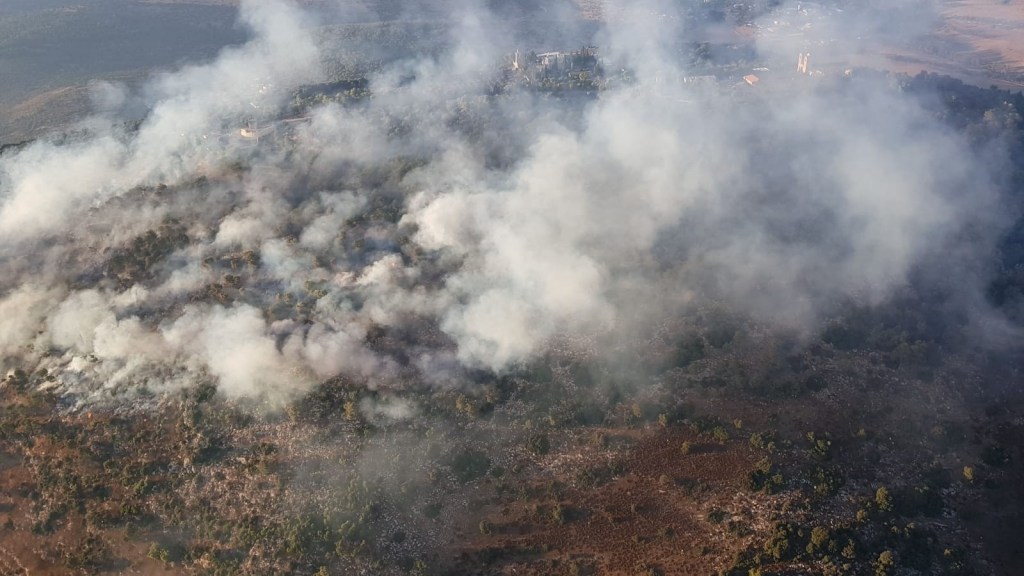 On the evening of Thursday 25th July, a large fire broke out on the eastern slope of Mount Tabor not far from the Church of the Transfiguration.

"Around 5 p.m. the police came to the church evacuating the community of Franciscan Friars Minor at the Church and the Community of Mondo X who reside permanently next to the convent for reasons of safety,” said Fr. Ricardo Maria Bustos, vicar and local bursar.  "I stayed here, together with a young man from Mondo X,to assess the situation and help the work of the police. They asked us for a high point of observation to evaluate the extent of the fire. From there we realized that the flames were only 200 metres from the Convent but the greatest danger had passed and the fire had been brought under control." The emergency was officially called off at around 9.00p.m. when the friars and the other youngsters were allowed to return to their accommodation.

A first inspection of the damage carried out this morning confirmed that the buildings were untouched. Nevertheless, the firefighters and a representative from the Israeli Parks Authority are present in the area and are keeping it under constant control. At present everything is going back to normal and the first groups of pilgrims will shortly be given permission to make the ascent. The early afternoon, when usually there are strong winds, is awaited to make sure that the danger has in fact passed.

"Just yesterday we moved the statue of St Francis into a more visible spot,” commented Fr. Ricardo "and it was at him that I looked when I left the Convent, in a situation of general confusion. I said to him: you are the only one who can quell brother fire. This has to be confirmation for us that St Francis holds his children dearly."