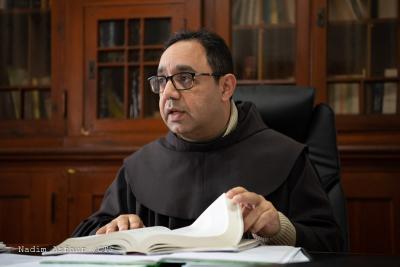 “Vocation is a simple thing”: this is how Fr. Marwan Di’des starts to tell his story. The Franciscan friar of the Custody of the Holy Land, today parish priest of the Latin church of Nazareth, felt the desire to put himself at the service of the Church from a very early age. With the simplicity of a fourteen year-old boy, he told his mother that he wanted to enter the convent and become “abuna” (this is how the priests are called in Arabic). Many years later, that seed grew and led him to start out on the path of formation in the Custody of the Holy Land.

How did your vocation come into being?
Ever since I was small, I would see the priest at the altar and I liked that, as though it was a nice job that I would have liked to do. I was attracted to serving at the altar and I did it often.

I come from a complex situation in which I came into contact with Christians of all the rites: I attended the schools run by the Anglicans, my mother was a Catholic and my father’s family were Orthodox. I grew up with an open mentality, so “there is room for everything and for everyone.” At a certain point in my life, however, I moved away from the Church. At seventeen, I joined the Franciscan Youth and it was during one of the Franciscan Marches that the desire returned to enter the convent. When I spoke to my mother about it, she asked me to complete my studies and take the school-leaving certificate, before deciding anything about my future. And this is what I did. It was 1st August 1992 when I entered the convent, the last day of the Franciscan March.

What were the stages that led to priesthood?
I went to Italy to learn Italian, then I did my novitiate in Ain Karem, two years of philosophy in Bethlehem and four years of theology in Jerusalem. In the second year of theology, however, I was overcome by great doubt. I didn’t want to become a priest, but only stay a lay Franciscan friar. I have never known the reason for this crisis, but I remember that for a year I had various meetings with the spiritual director and my master, who both told me that for them my vocation for the priesthood was clear. After the solemn profession as a Franciscan friar, the day of ordination as a deacon came, but I still had not found an answer to the doubts I had inside me. My name was on the invitations, but I had not invited any friends.

How did you understand that you were on the right path?
On the evening before the ordination as a deacon, I remember that I was very upset, because I felt others were pushing me to go towards the priesthood, which at that time I did not feel I wanted. I went to my master and I only told him that if the next day he found me in the sacristy, I would have been ordained with the others, otherwise not to look for me. That evening, I asked God for a sign and while I was alone in the bathroom, I clearly heard a voice: “I have given you the answer many times and now you are asking me again for a sign.” Immediately I had before my eyes the image of Jonas in the belly of the whale, a symbol of the resurrection of Jesus. Like the Jews, who asked for a sign but they could not see the signs already present in the Bible. I was frightened: I was upset. After Vespers, I went to bed exhausted, as though after a hard day’s work. The next day I was the first in the sacristy and I was sure and happy about my ordination as a deacon.

The day of my ordainment as a priest was also an important day. I was trembling with fear and cried for having doubted the will of the Lord. It is as though the Lord had slapped me, for not having understood. He woke me up. Later on in religious life, I had other problems, but what happened to me at the start of my vocation gave me a great deal of strength to overcome many obstacles.

Where have you served in the Holy Land, up to the present?
I was at the Holy Sepulchre for six months, then deputy parish priest in Jerusalem and then for fifteen years in Bethlehem. I ran the Home for Boys for many years there and I was also head of the Holy Land School of Bethlehem. I have been the parish priest of the Latin church in Nazareth since August 2019.

You always have to prepare people for our departure and this is what I did with the youngsters at the Boys’ Home and the Holy Land School. When I said goodbye to them over the microphone, in a square filled with 1200 people, there was great silence. Leaving Bethlehem was not easy for me, but our Franciscan life is like that, it’s not easy. Bonds of affection are always formed with people and it is normal that when you leave people and places it is painful. In the end, memories remain in the hearts, which can become a good thing or grief. I always try to enjoy the moment when I remember the lovely days in Bethlehem.

In your story, how were you able to recognise the Lord’s will?
Maturing in the faith does not come about from one day to the next: it starts when we are born. It grows increasingly or this path is destroyed and you follow another one. This continuing to build up an increasingly closeness to the Lord has given me the strength to understand the presence of the Lord in my life. If we look at our own life and see that at many times in life God was there, then you understand that he will be there again. However, this is an awareness that matures day by day, at the personal level. Christian education and formation are important, but trust in the Lord is a strictly personal experience. Like forgiveness: it has to be renewed every day. I lost my brother, who was killed in the second  Intifada and we have never found out who killed him. For the first two years I had inside me only a feeling of anger against people I did not even know, and then I realized that forgiveness has to be practised day by day. That is trusting in the Lord.