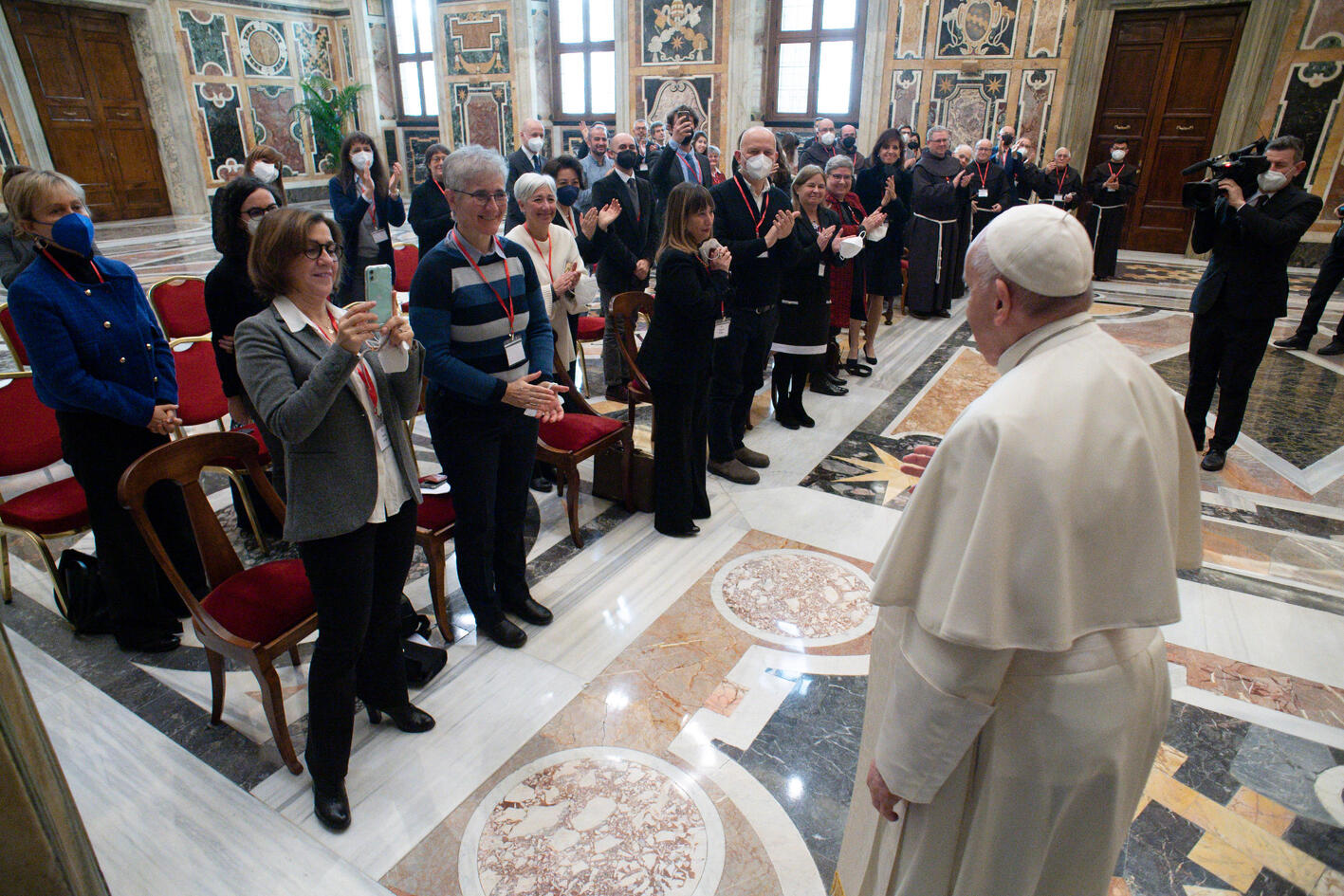 On Monday 17 January 2022, the communicators of the Custody of the Holy Land were received at a audience by the Holy Father in the Clementina Room of the Apostolic Palace in the Vatican, on the occasion of the centenary of the  foundation of the Terrasanta  magazine. Made up of 44 people and led by the Custos of the Holy Land, Fr. Francesco Patton, who came for the occasion from Jerusalem,  the delegation expressed a variety of national and linguistic origins, reflecting the international presence of the Franciscans  who, for eight centuries in the Holy Land, have looked after the shrines, accompanied pilgrims and have been engaged in Biblical and archaeological studies.

Founded in 1921 in Jerusalem during the upheavals that in the Middle East followed the end of the First World War, the Terrasanta magazine is published today in Italian, French, English, Portuguese, Spanish and Arabic versions. “One hundred years ago,” Father Patton told the Pope in his greetings, “the birth of our magazine was a sign of hope, and we want Terrasanta to continue today as well as being a sign of hope, telling the stories of the seeds of good sown in the dark furrows of history, in that small part of the world where the story of humanity became the story of salvation.”

“Making the Holy Land known means passing on the ‘Fifth Gospel’,” the Pope said in his speech to the delegation, “i.e. the historical and geographical environment where the Word of God was revealed and then incarnated in Jesus of Nazareth, for us and for our salvation. It also means making the people who live there today known, the life of the Christians of the various Churches and denominations, but also that of Jews and Muslims, to try to build up, in a complex and difficult context such as the Middle Eastern one, a fraternal society.”

The Pope emphasized how communication, in the time of social media, “has to help build up communities, even better, fraternity.”

Thanks the operators of communication present in his speech, the Pope added: “To produce your articles, your investigations and your publications, you do not restrict yourselves to the quieter areas, but you also visit the most difficult places in great suffering, such as Syria, Lebanon, Palestine and Gaza. I know that you try to present the stories of good, those of active resistance to the evil of war, those of reconciliation, those of restoring dignity to children who have been robbed of their childhood, that of refugees with their tragedies but also with their dreams and their hopes.”

Terrasanta came into being with the task of telling the story of the “marvels of the Holy Land “ and the engagement of the friars minor in the various fields of their activity, including the protection of the Christian communities in the countries where the Custody is present. Through contributions by experts, it is an instrument for in-depth knowledge of the complex reality of the Holy Land, dealing with religious, cultural, Biblical, archaeological and ecumenical subjects.

“Through the social communication media,” the Holy Father continued, “you can enrich the faith of many people, including those who do not have the chance to go on a pilgrimage to the Holy Places. You do so through our professional commitment, carried out every day with competence at the service of the Gospel. This is invaluable for believers all over the world and, at the same time, supports the Christians who live in the Land of Jesus.”.

On this joyful occasions of the audience with the Holy Father, there were the members of the Board of Directors of the Fondazione Terra Santa, chaired by Fra Giuseppe Ferrari, delegate of the Custos for Italy, the editors of the magazine, journalists, editors, administrative personnel and all the employees of the Foundation. They were also accompanied by the curators of the website of the Custody and the personnel of the Christian Media Center (which produced audio-visual news reports and broadcasts celebrations and news from the Holy Land in ten different languages) active in Jerusalem and the editorial staff of the French, Spanish and Brazilian editions.

At the end of the audience, the Pope personally greeted all those present, giving each one a rosary. All our faces showed great emotion as we crossed the courtyard of San Damaso of the Apostolic Palace ,thinking back to the intensity of the meeting which marked the conclusion of the magazine’s centenary and opened up a window on to the future.

The full speech of the Holy Father to the delegation is on the website www.vatican.va 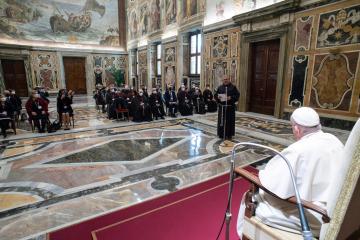 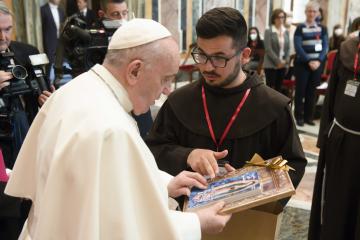 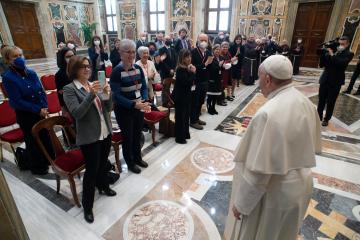 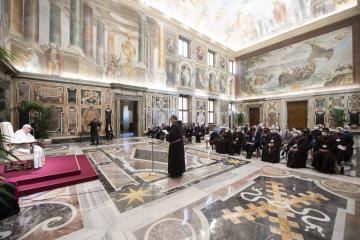 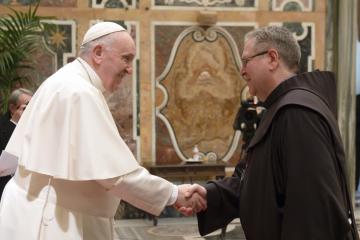 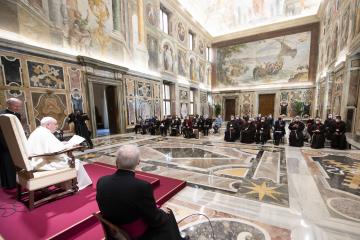 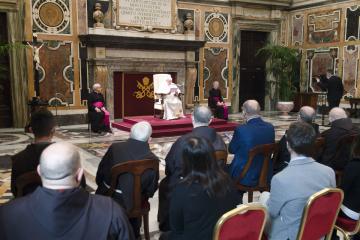 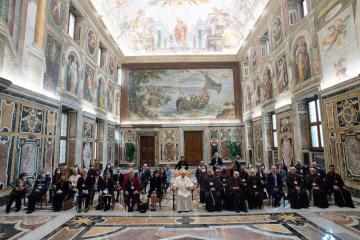 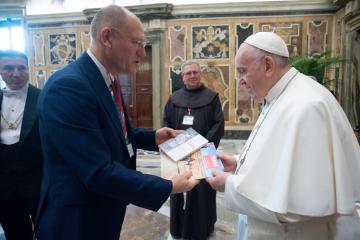 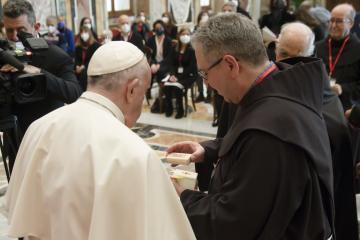 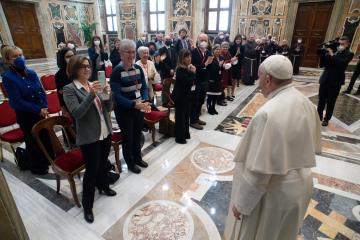 Pope Francis in Greece meets the refugees: a testimony