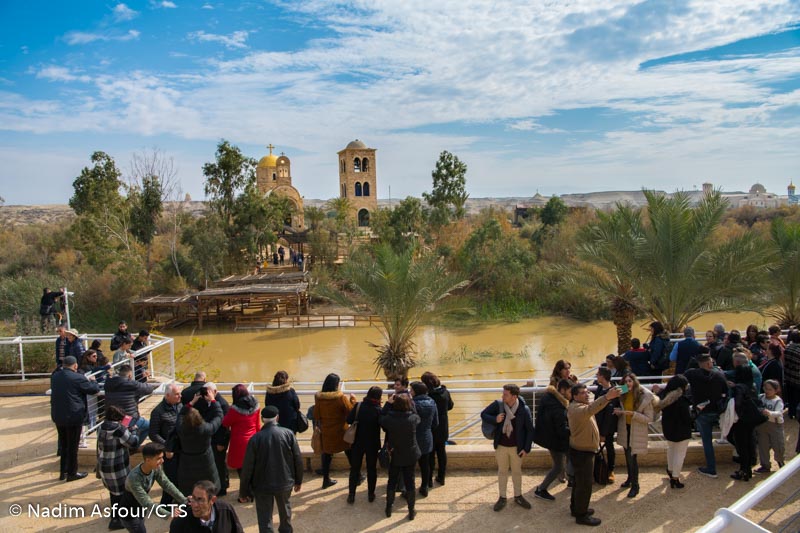 On the west bank of the River Jordan, not far from Jericho, there is the place that commemorates the baptism received by Jesus from John the Baptist. The River Jordan runs in the middle of this venerated territory, cutting it into two politically distinct parts amd representing today the border between the area controlled by Israel (to the west) and Jordan (to the east).
The place of the baptism is indicated by the Arabic name of Qasr al-Yahud, the rock of the Jews, probably to recall the Israelites when they crossed the river on their rrival in the Promised Land (Genesis 3,14-17).

The Jordan River, whose name means “flowing further and further down,” arises from the fusion of three rivers, all three fed by the springs of Mount Hermon: the Senir or Hasbani stream, the Dan stream, the Banias stream. The course of the Jordan, up to the Dead Sea, winds for a total of 330 kilometers, even if it would be only 170 as the crow flies. The length of the river is practically doubled by its many loops. Evaporation is very strong, given the climate. The flow is further reduced by the emissaries on both sides, so that only a minor percentage of the water reaches the Dead Sea. The river valley, 10 to 25 kilometers wide, is the deepest groove carved into the Earth’s crust, among those not completely filled with water. In the Ice Age (100,000 years ago) the entire depression constituted a basin that connected with the Mediterranean to Bet Shean. Today two lakes remain of that basin: that of Gennesaret (212 meters below sea level) and the Dead Sea (at -426 meters). In any case, the Jordan pit is only a segment of a much larger fracture in the Earth's crust, which begins in the Oronte valley in Syria and extends to Africa via the Gulf of Aqaba and the Red Sea.

Directly on the Jordan River is the place of baptism, in Arabic al-Maghtas, where this episode from the life of Jesus has been remembered, as far as we know, since the sixth century (judging from the map of Madaba). It is possible that this shore of the Jordan was originally chosen because it was more accessible than the East bank.

Since the beginning of Christianity to the present day it has been debated why Jesus, the Messiah, needed to be baptized by his Precursor. The answer will be sought in an absolute choice of solidarity: Jesus wanted to fulfill “all justice” in the eyes of God, for the benefit of every human being. He is “the Lamb of God, the one who takes away the sin of the world” (John 1:29).
The Gospel of John also mentions another place used for baptisms: Ennon at Salim, but it is clear from all four Gospels that Jesus’ baptism could not take place there, because it happened “in the desert” (Mark 1:4; Luke 3:2). Matthew (3:1) states: :In the desert of Judea.” The fourth evangelist also names the area: “Bethany, beyond the Jordan, where John was baptizing” (John 1:28).

A testimony on the importance of the site of the baptism of Jesus on the Jordan is handed down to us by the Anonymous Pilgrim of Piacenza already in the year 570. He speaks of a cross placed on a marble column in the center of the river, to indicate the event of Baptism .
According to historical memories, the Franciscans make the annual pilgrimage to this site at least since 1641.
Since 1967, as a result of the war between Israel and Jordan, the entire area was closed to pilgrims and tourists and became a huge minefield (55 hectares) and a military zone. It wasn’t until the year 2000 for the visit of Pope John Paul II in the Holy Land a small access was opened, which was then closed again after the first Intifada. In 2011, the Israeli authorities cleaned up a small part of the land to make it accessible to pilgrims.
Since January 2018, the Halo Trust organization has gradually de-mined all the territories belonging to the eight Christian churches, which own of the area: Catholic, Greek Orthodox, Armenian, Coptic, Ethiopian, Romanian, Syriac and Russian.
On July 9, 2018, it was the time for the Franciscan land to be de-mined. We proceeded with de-mining from the main road toward, around and inside the church. No suspicious material was found in the church and monastery, but the Halo Trust operators requested the removal of all objects.
(MORE INFO HERE: The Franciscan monastery on the Jordan River 50 years after the closure and Transforming a battlefield into a peace camp).
According to Halo Trust forecasts, 30,000 square meters of land will soon be declared free of landmines.

The Franciscan Church
In 1932, the Custody of the Holy Land purchased land near the place of Jesus’ baptism on the Jordan River and in 1933 it had a chapel built near the river. In 1935, a short distance away, the small church that still stands today, dedicated to St. John the Baptist, was opened.
The structure is on two levels. On the ground floor, there are the rooms of the monastery, used as a guesthouse and a place of support for the friars, who would return to the monastery in Jericho in the evenings (on which, in fact, that of the baptism site depends). Through the stairs placed outside the building, you can access the upper floor where there is the small church, with a dome and enclosed by windows.
The Franciscan building was restored after the 1956 earthquake, but, following the abandonment of the site during the Six Day War, it suffered further damage. It is not currently accessible to pilgrims, but work is underway to reopen this space again.

The Greek Orthodox Monastery
At a distance of one kilometer from the bank of the Jordan River, one can reach the imposing ruins of the Greek Orthodox Monastery of the Precursor (Pròdromos), or John the Baptist, with a crypt from the Byzantine era. In the Middle Ages, the Byzantine emperor Manuele Comneno (1143-1180) had the monastery rebuilt and fortified, but later it would have fallen again. In 1882 the Greek Orthodox Patriarchate bought the land and revived the religious community. The ancient Aramaic-Syriac name of the monastery, also preserved in Arabic: Mar Yuhanna, literally the Lord John (see the ancient Christian invocation Mar-ana tha, “Come, Lord!” in 1 Cor 16:22). In the Church of the Aramaic language, in fact, the title of lord / lady is still equivalent to that of saint / saint.
The monastic complex will soon be reopened. The announcement was made at the end of January 2018 by the Greek Orthodox Patriarchate of Jerusalem. In an official statement it is specified that the monastery is currently being renovated to become an Orthodox shrine and a place of welcome for pilgrims.

“Then Jesus appeared: he came from Galilee to the Jordan to be baptised by John.
John tried to dissuade him, with the words, ‘It is I who need baptism from you, and yet you come to me!’
But Jesus replied, ‘Leave it like this for the time being; it is fitting that we should, in this way, do all that uprightness demands.’ Then John gave in to him.
And when Jesus had been baptised he at once came up from the water, and suddenly the heavens opened and he saw the Spirit of God descending like a dove and coming down on him.
And suddenly there was a voice from heaven, ‘This is my Son, the Beloved; my favour rests on him’”(Matthew 3: 13-17). 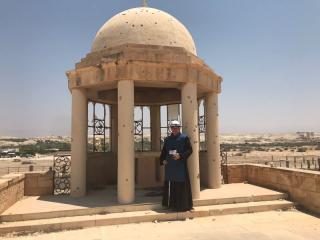 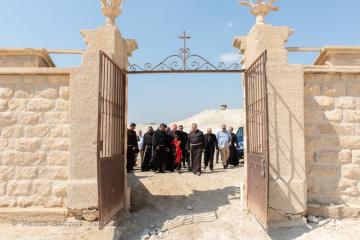 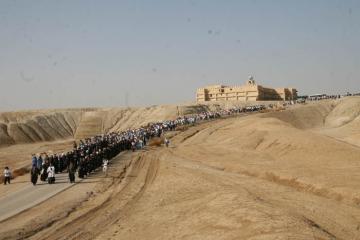