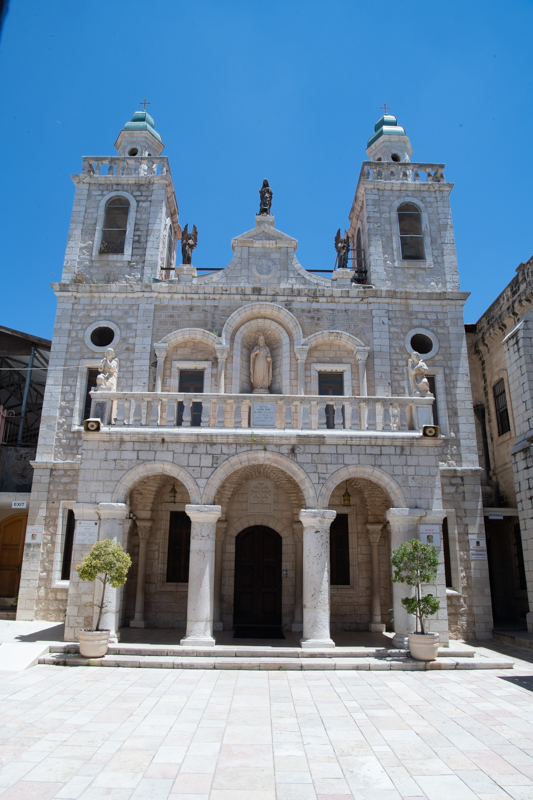 At Cana in the Galilee, Jesus performed his first miracle, changing water into wine at the request of Mary, his Mother. In this way, Jesus manifested his divine glory and kindled the faith of his disciples. This is also where we commemorate the vocation of the apostle Bartholomew (Nathanael), of whom Jesus said, admiringly, "Here is a true Israelite."

"Everyone serves good wine first, and then when people have drunk freely, an inferior one; but you have kept the good wine until now." John 2:1-11

"(Having left Sephoris) after three miles we came to Cana, where the Lord attended a marriage; and we sat on the same seat; unworthy though I am, I wrote there the names of my parents… Two jars remain. I filled one with wine, carried it on my shoulders and offered it at the altar. We piously washed ourselves in that very fountain. Then we went to the city of Nazareth.” The testimony of the anonymous pilgrim from Piacenza (circa 570) is the most detailed of those that tell us about a Christian sanctuary close to Sephoris and Nazareth that commemorates Jesus’ first miracle. At various times local tradition placed this evangelical memory at different sites. From the 17th century until now, Kafr Kenna has been the site most visited by pilgrims. The pilgrims were shown an underground room on the inside of the columned building, thought to be the first church built in the time of the emperor Constantine and his mother Helena. When the new church was built, blessed in 1881 then enlarged in 1897-1905, ancient remains of a Jewish building from the Romano-Byzantine period (third to fourth centuries), whose columns and capitals were reused in the present portal, were discovered. Of particular note is the Aramaic inscription found about 90 centimeters below the church’s floor tiles: "Blessed be the memory of Joseph son of Talhum son of Butah and his sons, who made this picture (mosaic). Blessings be upon them."

The wedding at Cana
On the third day there was a wedding in Cana in Galilee, and the mother of Jesus was there. Jesus and his disciples were also invited to the wedding. When the wine ran short, the mother of Jesus said to him, "They have no wine." (And) Jesus said to her, "Woman, how does your concern affect me? My hour has not yet come." His mother said to the servers, "Do whatever he tells you." Now there were six stone water jars there for Jewish ceremonial washings, each holding twenty to thirty gallons. Jesus told them, "Fill the jars with water." So they filled them to the brim. Then he told them, "Draw some out now and take it to the headwaiter." So they took it. And when the headwaiter tasted the water that had become wine, without knowing where it came from (although the servers who had drawn the water knew), the headwaiter called the bridegroom and said to him, "Everyone serves good wine first, and then when people have drunk freely, an inferior one; but you have kept the good wine until now." Jesus did this as the beginning of his signs in Cana in Galilee and so revealed his glory, and his disciples began to believe in him.

The healing of a royal official’s son
Then he returned to Cana in Galilee, where he had made the water wine. Now there was a royal official whose son was ill in Capernaum. When he heard that Jesus had arrived in Galilee from Judea, he went to him and asked him to come down and heal his son, who was near death. Jesus said to him, "Unless you people see signs and wonders, you will not believe." The royal official said to him, "Sir, come down before my child dies." Jesus said to him, "You may go; your son will live." The man believed what Jesus said to him and left. While he was on his way back, his slaves met him and told him that his boy would live. He asked them when he began to recover. They told him, "The fever left him yesterday, about one in the afternoon." The father realized that just at that time Jesus had said to him, "Your son will live," and he and his whole household came to believe. 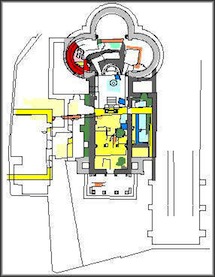 The Franciscans, who had already been present with a small property at Cana for three centuries, were able to buy the site back only in 1879, thanks to the tireless work of Father Egidio Geissler, who was the pastor of Nazareth.
The archaeological excavations conducted in 1969 by Father Stanislao Loffreda in the northern courtyard of the church and its adjoining rooms led to the discovery of a flagged courtyard, more mosaics, and ancient stonework belonging to a synagogal reality that extends beyond the Franciscan property. In 1885, a chapel in honor of Saint Bartholomew (Nathanael), one of the twelve apostles and a native of Cana, was built about 100 meters from the church. During recent restoration work, archaeological excavation permitted concluding that the Aramaic inscription had been placed in the synagogue porch. The porch was a portico; there was a cistern at its center.

Guide: Let us pray to God our Father, who chose to associate the Virgin Mary to the Mystery of Christ the Savior, that he may give us his Spirit of Intelligence and make us able to discern the Glory of Christ and to accept it in our lives. All: Lord, hear our prayer.

1. For the Church, that it may purify itself of all trace of sin and shine forth in all its beauty as the bride of Christ. Let us pray.
2. For all Christian spouses, that their union may respect well-ordered love and be a shining sign of Christ’s love for his Church. Let us pray.
3. For those who govern us, that they may respect and give priority to the Sacrament of marriage, which God has made a foundation of human society. Let us pray.
4. For all Christians, that in the school of the Virgin Mary they may learn not to conform themselves to the world’s mentality but to take the words of the Lord Jesus as points of reference. Let us pray.
5. For all those who live without regretting that they are far from God, that they may recognize in Jesus, who at Cana offered a joyful new wine, the One who brings joy and hope. Let us pray.
6. For us pilgrims, that in contemplating the Glory of the Lord Jesus, may grow in our hearts the desire to take part in his Pascqua, his death and his resurrection. Let us pray.

Guide. Lord God, whose Design was that Mary be present at the Mysteries of her Son Our Lord, let us be attentive to her counsel and put into practice the gospel teachings of Christ. Through Christ our Lord.. All: Amen. 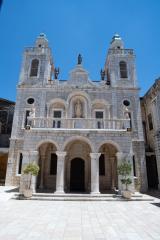 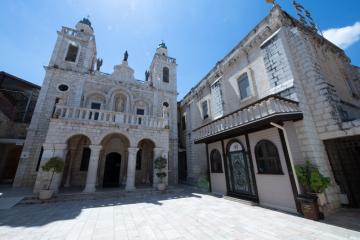 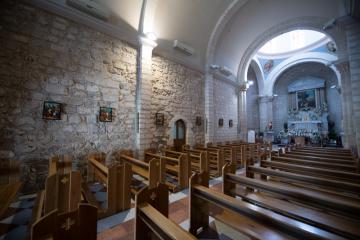 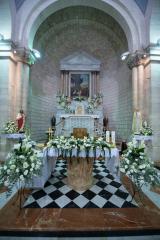 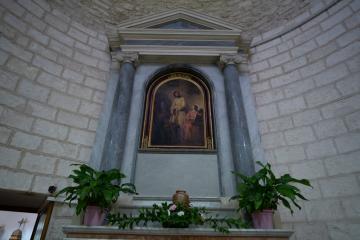 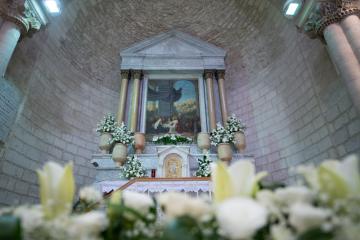 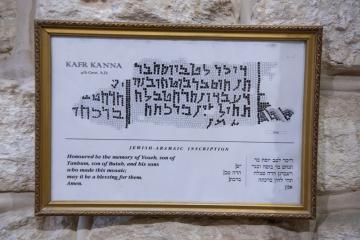 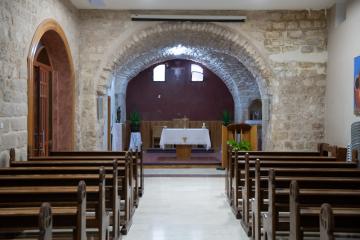 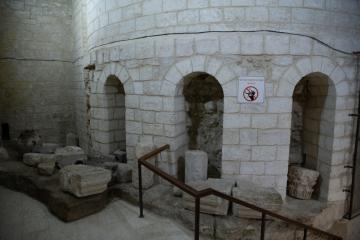 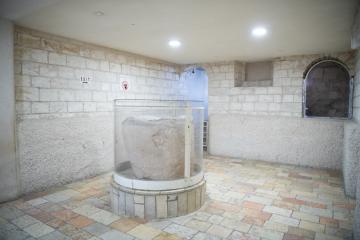 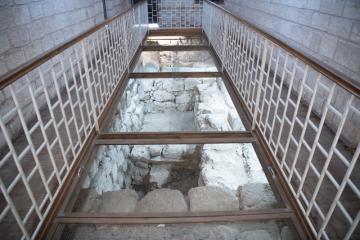 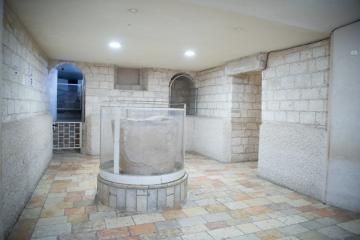 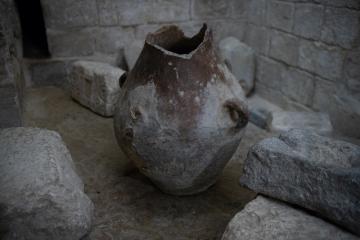