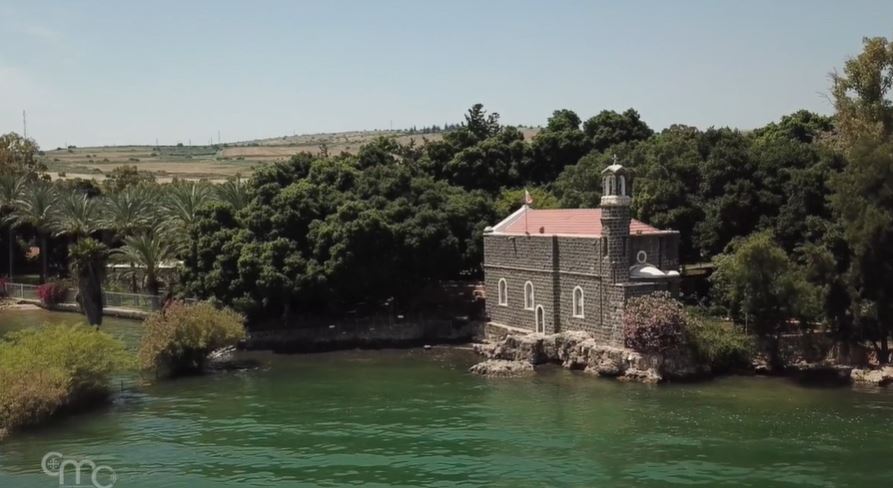 At the end of Easter time the Franciscans go on pilgrimage to Tabga, where the Church of the Primacy is located. The Gospel offered by the liturgy recounts how "it was the third time that Jesus showed himself to the Disciples, after he had risen from the dead.

The afternoon breeze, the sound of the waves of the lake water and being able to contemplate this beautiful scenery make the biblical story even more fascinating.

"Come and eat". This is how Jesus addresses Peter and his fishing companions as they pull the net with the 153 large fish ashore. It is a gesture of fraternity that Jesus makes. It is a gesture of love".
This was the beginning of the homily by Brother Francesco Patton, Custos of the Holy Land, who presided over the celebration together with Brother Dobromir Jazstal, Custodial Vicar, Brother Tymoteusz, Superior of the community of Tabgha and the community of friars of Galilee, as well as some religious.

From this place derives and descends what we normally call "the primacy of Peter", that is, his task within the Church. It is once again a primacy of love that consists in nurturing and guiding one's brothers, as Jesus nurtured and guided his disciples.

At the end of the celebration, everyone goes in procession to the church of Mensa Christi, a short but very meaningful route, and one that allows us to hear again the echo of Jesus' words, as proclaimed in the Gospel according to John: "Peter, do you love me? Shepherd my sheep."

Br FRANCESCO PATTON, ofm
Custos of the Holy Land
"This is an extraordinary place because it is the place, according to the Evangelist John, of the third apparition of Jesus, which is also the last one.
The beautiful, surprising thing about the story is that while these apostles are pulling, Peter is pulling this net with 153 large fish. While Jesus, on the rock that we venerate inside the sanctuary as the mensa Christi, the Lord's table, has already put some fish on the grill, as if he had already fished. He has already prepared some bread to share with his disciples."

The Custos underlines and defines as "extraordinary the conversation between Jesus and Peter, to whom he asks three times... "Do you love me?"

Br FRANCESCO PATTON, ofm
Custos of the Holy Land
"And then for the third time Jesus asks Peter: do you love me? This time Jesus changes the verb; he no longer asks "do you love me" with a completely gratuitous love; he asks him: "Do you want to be my friend?". Peter, a little bitter, because he remembers that he had denied him three times, answers: "Lord, you know everything. You know that I love you." And Jesus says to him for the third time: "Shepherd my sheep, that is, feed my sheep". This is the primacy that Jesus entrusts to Peter, which is the fruit of a relationship of love."

This Pentecost weekend will be one of prayer for peace for Jerusalem, for the Holy Land and for the whole world.

Br FRANCESCO PATTON, ofm
Custos of the Holy Land
"It will be a day of prayer for peace, thank God there was a truce signed last night; and we can say that from the point of view of the armed conflict, the situation is much better. But of course we must pray and invoke the descent of the Spirit and that it be a very strong descent because a truce is something very fragile; and the truce is not peace; it is simply a pause that two combatants make, between one fight and another. Whereas what we must ask of the Holy Spirit is a path, a path of authentic peace. We must ask with Pope Francis for the ability to arrive at reconciliation and forgiveness."

Br FRANCESCO PATTON, ofm
Custos of the Holy Land
"I believe that we must strongly invoke the spirit not only for Jerusalem, for the holy land, but for the whole world because unfortunately there are many conflicts, even forgotten conflicts."