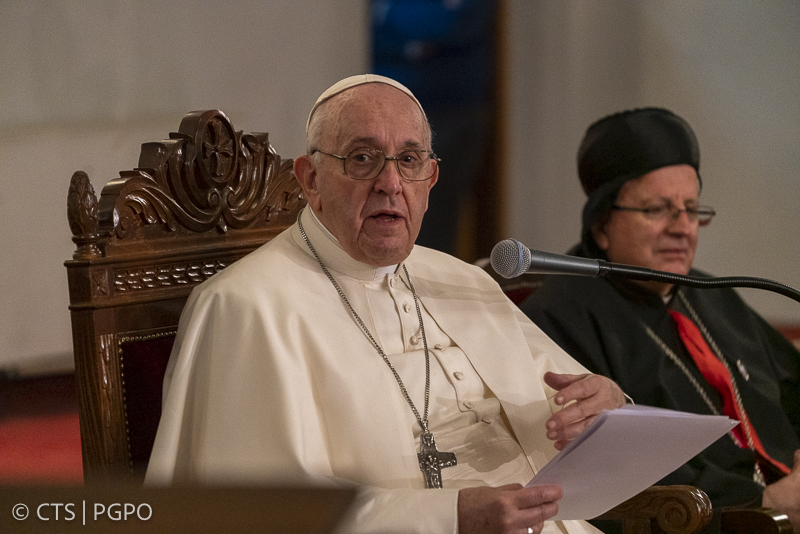 Pope Francis’s visit to Cyprus opened with a message of encouragement for the local Church, in the footsteps of St Barnabas and St Paul. The first meeting for the Holy Father, who landed in Larnaca in the early afternoon of 2 December, was with the consecrated men and women of the Holy Land and the local ecclesiastical movements. In the Maronite cathedral of Nicosia, Pope Francis wanted to speak to them about patience and brotherhood,  two words which have to be at the centre of the Church of Cyprus. It is a variegated church, which includes 26,000 Latins and 3,000 Maronites: a people in celebration today for the Pope,  despite the limitations on gatherings due to Covid-19.

“I am looking at you and I can see the richness of your diversity,” Pope Francis said, greeting the Maronites and also recalling the difficult period that Lebanon is going through: “When I think of Lebanon, I feel great concern for the crisis it is in and I feel the suffering of a people who are tired and worn-out by violence and grief. I carry in my prayer the desire for peace that rises from the hearts of that country.”

The Maronites are one of the Oriental rites of the Catholic Church and their presence in Cyprus dates back to four subsequent waves, between the 8th and the 13th centuries from Syria, Lebanon and the Holy Land. Today there are about six thousand Maronites in the whole island and their eight parishes for a diocese. They have excellent relations with the Franciscan friars operating in Cyprus and moreover the Franciscans also represent the Maronites at the Holy See.

A fraternal church for a “multi-coloured” people

The Maronite Patriarch,Cardinal Béchara Boutros Raï, and the archbishopSelim Jean Sfeirwere in the cathedral to welcome the Holy Father. The Custos of the Holy Land, Fr. Francesco Patton and the Latin Patriarch of Jerusalem, His BeatitudePierbattistaPizzaballa were also present, following the apostolic delegation on this trip to Cyprus.

“I also greet the Latin Church, present here for thousands of years, which over time has seen, together with its children, the enthusiasm for the faith grow and which today, thanks to the presence of many migrant brothers and sisters, appears as a “multi-coloured” people, a real meeting place between different ethnic groups and cultures. This face of the Church reflects the role of Cyprus in the European continent: There are no and may they not be any walls in the Catholic Church: it is a house for everyone, it is the place of relations, it is the coexistence of diversities.. Pope Francis said this, giving then the example of Barnaby and Paul who, like brothers, travelled together to announce the Gospel, even in the midst of persecutions. “Dear brothers and sisters, we need a fraternal Church that is an instrument of brotherhood for the world,” the Pope concluded.

In support of migrants

On behalf of the religious men and women, Sister Antonia Piripitsi, a Franciscan Missionary Sister of the Sacred Heart and Sister Perpetua Lou, a Sister of St Joseph fo the Apparition, shared their testimony.  “I offer my service in the social centre for immigrants,” Sister perpetua explained. “Today the subject of migrants is highly controversial: the world needs to re-establish human dignity. We are Christians, Catholics, we follow the life of Christ and we are in the land of St Barnabas and St Paul: these reasons drive us to see the face of God in humanity. The Church has taught us that we are created in the image of God and this means that we all have the right to have human dignity.” Sister Perpetua, who is in contact on adaily basis with the hardest and most difficult situations of migrants, does not conceal her emotion at having told the Holy Father about her work: “Today, just before I gave my testimony, when I realized that I would be speaking in front of the Pope,  who is the vicar of Christ on Earth, and I heard that there was a lot being said about comforting and consoling others, I was greatly moved. I stopped crying only because I could not delay my testimony. It is difficult to describe what I feel. The Pope represents and expresses the love of God here today.”

“The two sisters explained their experience with the migrants well and I know these topics very well because we often work together. I was impressed by the words of the Pope about patience,” commented Fr. Andrew Arhin, parish priest of the Latin parish of the Holy Cross in Nicosia. “This visit will bring about a change in people’s hearts. I have met a lot of people in the past few days who told me they wanted to attend the Pope’s mass and, usually, they do not go to church. This visit has given people a new desire for God.”

The moment most eagerly awaited by the local Christians is precisely the mass that will be held at the stadium, to be presided by the Holy Father on Friday 3 December, to embrace the flock of Cyprus as a shepherd. 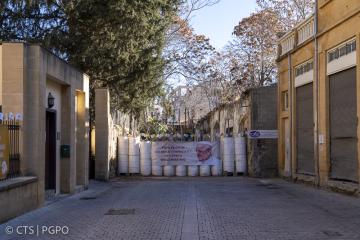 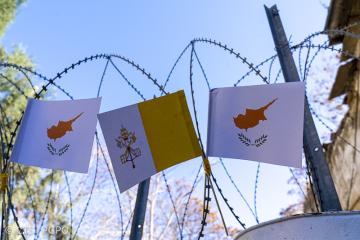 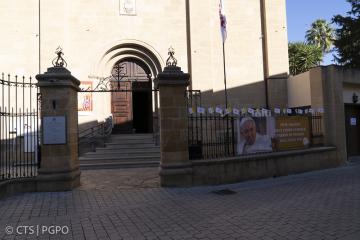 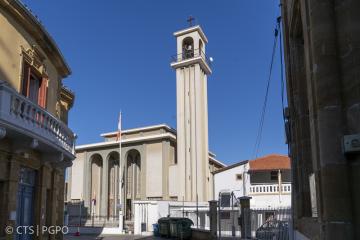 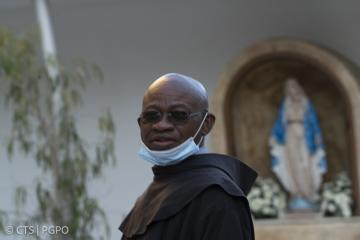 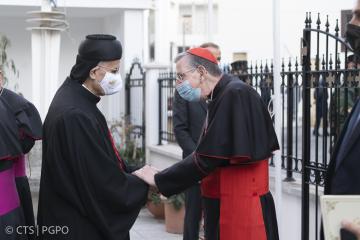 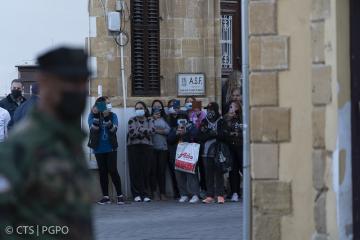 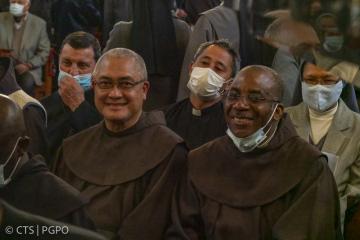 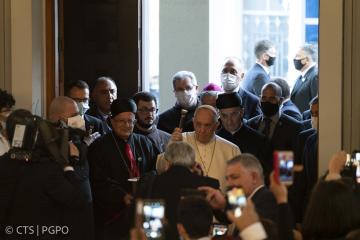 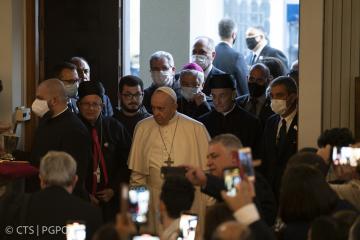 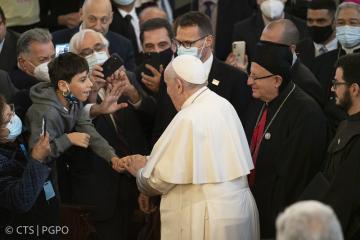 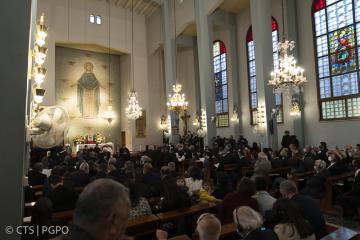 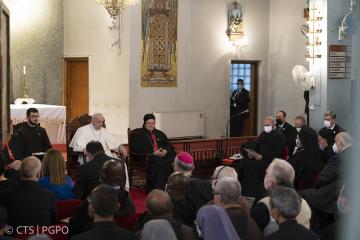 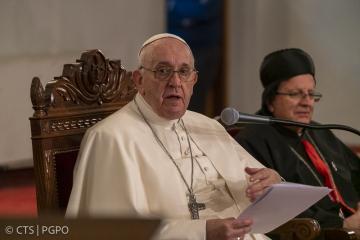 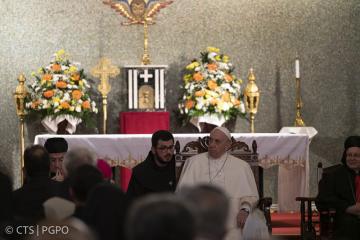 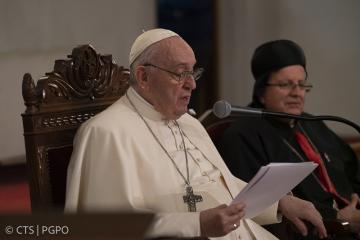 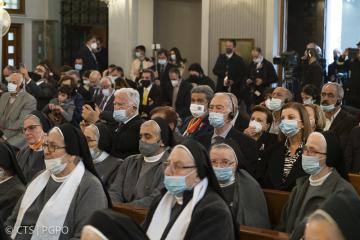 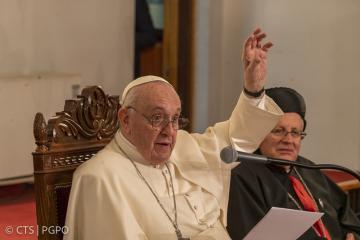 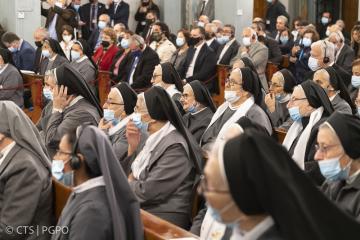 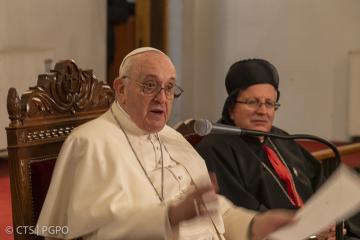 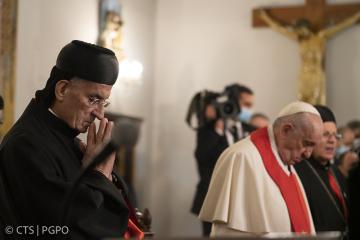 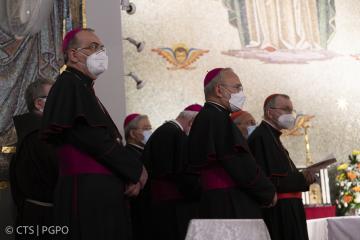 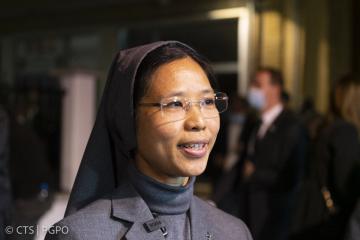