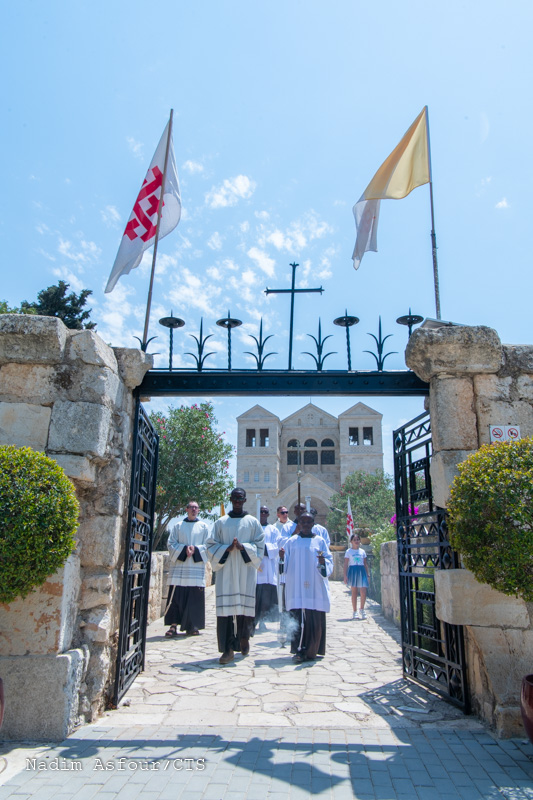 On Friday, 6 August, the day of the solemnity of the Transfiguration of Our Lord Jesus Christ,  as every year, the Franciscans of the Custody of the Holy Land gathered in the place that remembers this event: Mount Tabor.

The shrine has been opened once again to the faithful after the pandemic and some restoration work on the structure. It was Fr. Dobromir Jasztal, vicar of the Custody of the Holy Land who presided the Eucharistic celebration in Arabic in the shrine which stands 450 metres above the plain.

Following tradition, the homily was given by the parish priest of Nazareth, Fr. Marwan Di’ides,from where most of the local faithful present are from. “As the Gospels tell us, Jesus is on a mountain whenever something extremely significant happens,” said the parish priest. “The Annunciation is in Nazareth, a small mountain; Bethlehem is also built on highland; the Calvary is considered a mountain and even the Sermon of the Beatitudes was pronounced on a hill above the Sea of Galilee. The reason is simple: He wants us to look upwards and forget sin, which drives us downwards.”

The second point of his homily touched more closely on the feelings of Peter and the other disciples. “When they hear the voice of the Lord, Peter and the others kneel down but, at the same time, they are very afraid. Is it possible that they even have now, in eternal Glory, the same feeling? Certainly not. They are now living the feeling of love to the full, as they have got to know God and learnt that he loves them and – there is more – they have learnt  to look upwards, as He tells us, they have looked for and discovered God’s project of love for them. Today this is how we think of them: kneeling, before the Lord, but without fear, only with a great feeling of love.”

“Today, on this precise occasion,” Fr. Marwan concluded, “the Mountain invites us as well to do this: to look upwards, as they did; to leave sin, to look for God’s project and never to be afraid of Him, but to love him out of all proportion.”

There is a hypothesis that the highland was already inhabited in the Canaanite period, which reinforces the idea that a shrine to the god Baal stood on Mount Tabor. His worship was exported as far as Rhodes, where there was a shrine dedicated to Zeus Atabyrios, but where “Zeus” stood for the main divinity of the Canaanites, and the adjective Atabyrios indicates his origin from Tabor, which was Atabyrion in Greek. In the various times of war, the mount became a place of refuge for the inhabitants of the area. The highland was effectively surrounded by a wall as early as the time of the battle of the Hebrews against the Canaanites, again in the times of Josephus Flavius in the war against the Romans and then again during the Crusades.

Few accounts tells us of the past of the Mount. The first concerning Christian worship on the Mount dates back to Origen in the middle of the 3rd century. Another account comes from the pilgrim of Piacenza, who tells us of the three basilicas existing in 570, in parallel with the “three tents” related by the Gospels.A document from the times of Charlemagne is later, but important, which tells of the presence of four churches served by eighteen monks. After the defeat of the Christians at the Battle of Hattin, Mount Tabor was abandoned. It was thanks to Frederick II of Swabia and his peace treaty with the sultan Al-Kamilthat the monks went back to the mountain and remained there until 1263 when the churches were once again razed to the ground. Later, the site was entrusted to the care of the Franciscans.

At the end of the celebration, the friars went in a procession towards the entrance, to the Descendendibus Chapel. This is the place where, according to tradition, Jesus told the disciples not to tell anyone what they had seen until the Son of Man had risen from the dead” (Mark  9, 9-12). There, the friars were given some branches of the oak tree in the shrine of Tabor, a symbol and memory of the place and of the celebration. 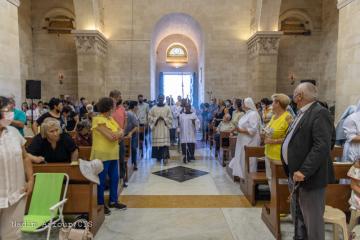 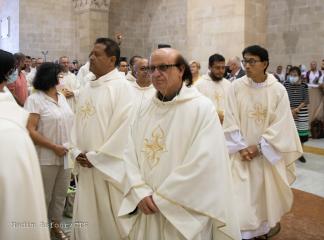 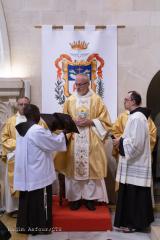 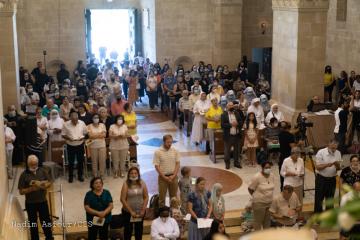 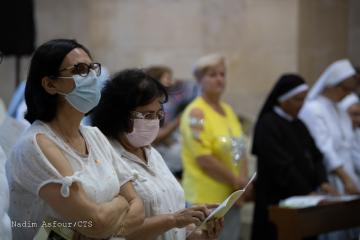 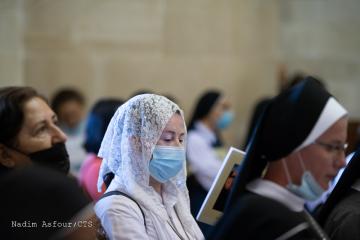 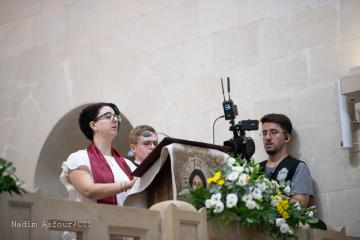 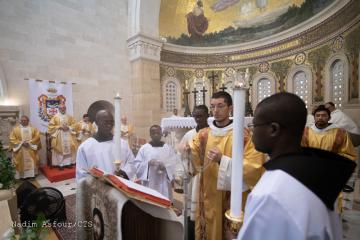 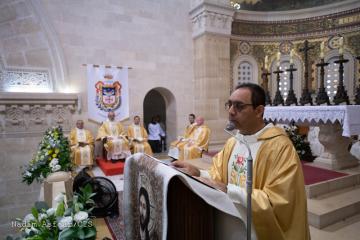 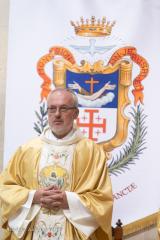 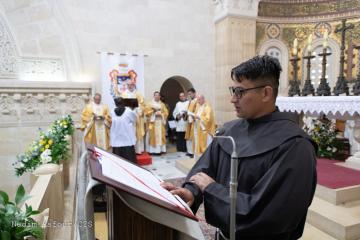 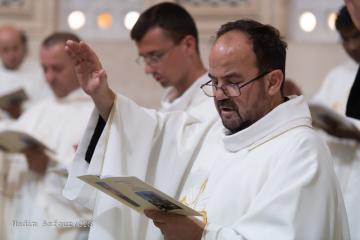 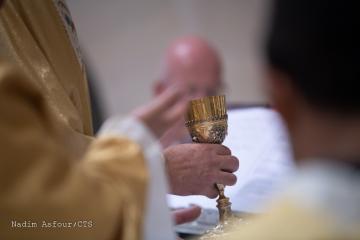 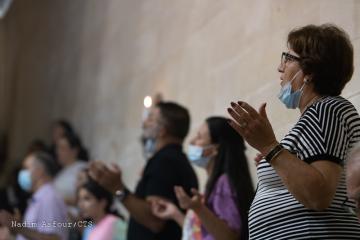 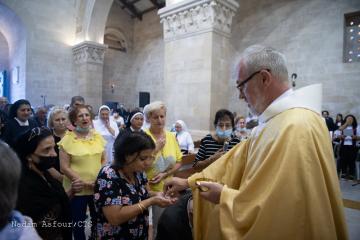 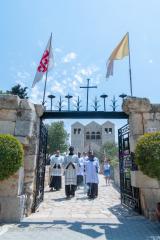 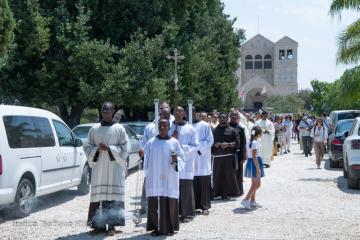 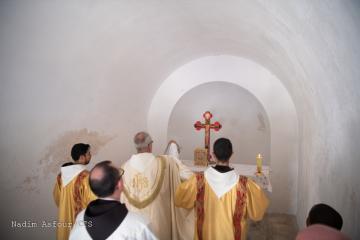 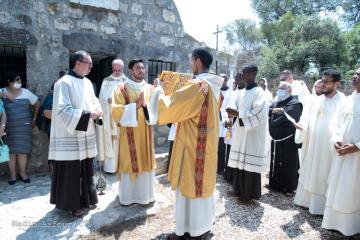 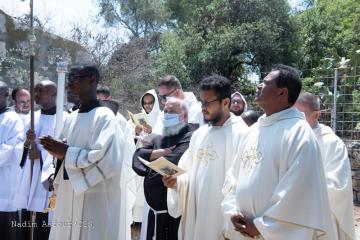 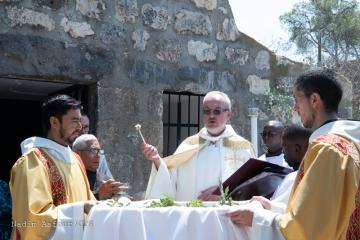 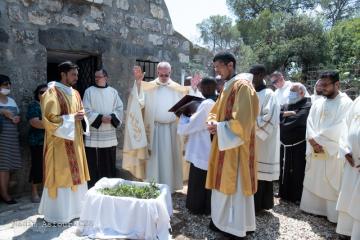 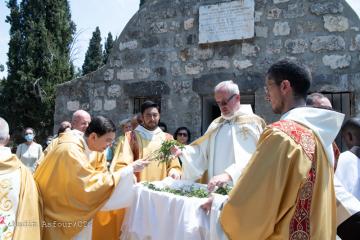