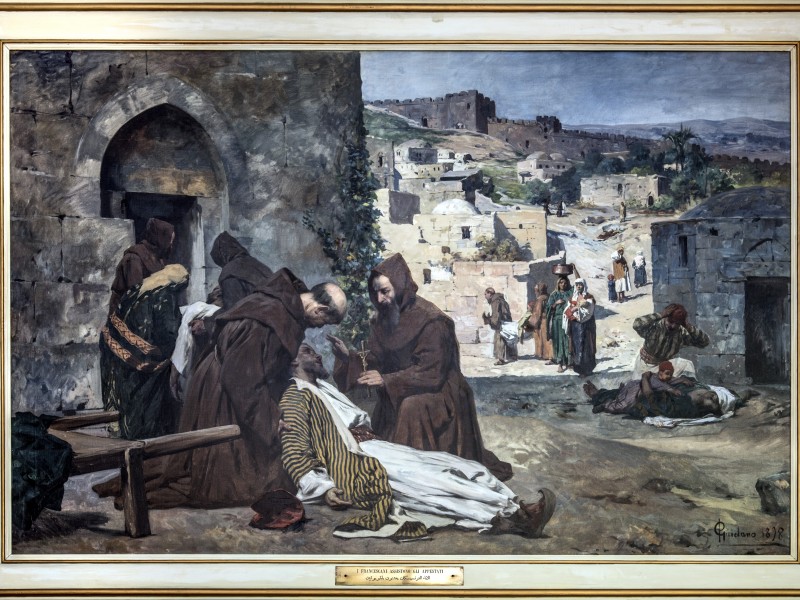 Franciscan history has in its pages very many names of religious who sacrificed their lives to remain at the side of the sick in times of epidemics. 407 religious have died of the plague  since 1619 to the present day, according to the official sources of the Custodial archives and others are alleged to have died in the earlier centuries, even though they are not documented. Over the centuries, the Franciscans in the Holy Land have played a fundamental role in Jerusalem in looking after the sick and in the spiritual assistance of the faithful.

The Grand Mufti of Jerusalem himself was treated by the doctor of St Saviour’s Convent, Fr. Giovanni da Bergamo, as P. Boucher reports in “Le bouquet sacré” (Lyon,  1660). Another famous case is that of the Pasha of Akko, Muhammed al-Gezzar who several times requested the presence of Fr. Francisco Lopez, a doctor in Jerusalem, in his palace (Tierra Santa magazine, issue no. 18, 1938).

In the Holy Land, where leper colonies did not exist (there is information about them only from 1785 onwards),the Franciscans had to self-impose precautionary measures, aimed at limited infection in the times of epidemics. As soon as news arrived that the plague had reached the city, the Custodial Discretorium, the governing body of the Custody,  decreed what was known as the “lockdown”: nobody – religious or lay – was allowed to leave the convent and all contacts with the outside world were mediated by a person in charge, who was also appointed to ensure the respect  of this rule. It is something similar to what has happened recently with the Covid-19 pandemic, when the Custos of the Holy Land asked the friars not to leave the convents until new instructions.

“When I read the measures of the Custos, the first thing that came to mind was precisely the lockdown,” says Fr. Narcyz Klimas, deputy archivist of  the Custody. “I immediately compared the past and the present. As then, some friars today have had permission to go out.” In the past, some religious remained outside during the time of the plague, and they were usually the parish priest and  the parish collaborator. Called the “exposed” in jargon, in carrying out their activity of looking after souls, they ran the risk of contracting the disease and dying. Isolation from the rest of their brothers, shut up in the convent because of the “lockdown”, made their deaths even harder. The Franciscans, however, offered themselves for the care of their flock with a spirit of charity, naturally trying to protect themselves as they could. One example is the use of a particular instrument, the  “comunichino”: these were silver pincers which ended with a sort of communion-plate or paten which was used to distribute the Eucharist without coming into close contact with the faithful (for further information see Medicine in the Holy Land: a symbol of international and interreligious charity)

The study of medicine has always been important in the Franciscan Order. St Francis himself, in Chapter VI of the Franciscan Rule recommends looking after the sick, because “if a mother loves and cares for her child in the flesh, a friar should certainly love and care for his spiritual brother.” This is also why the Franciscans carried on for centuries the activity of the pharmacy of St Saviour, which we find mentioned from the 14th century. “For a very long time, the friars’ pharmacy was the only one in Jerusalem,” explains Fr. Narcyz. ”Many Arabs came for treatment, including Muslims and even Jews until about 1935.” (for further information see “The Pharmacy of St Saviour in Jerusalem”).

The Custody of the Holy Land continues today to pay great attention to the dignity of the human being, connected with the environment that surrounds him, which are subjects dealt with by the Commission for Justice Peace and Integrity of the Created.

In this period of the pandemic, the Custody has provided material and spiritual support, through parishes scattered around the Holy Land, and has continued to pay part of the salary of the employees who live in the Palestinian territories, who do not have the guarantee of economic aid such as redundancy pay.

‘’The role of the friars in the pandemic is still be important from the spiritual point of view,” continued Fr. Narcyz. “Our friars pray for the sick and have also been a support in this time of Easter. When people saw the friars go past in the streets of the Old City praying along the Via Crucis on Good Friday, they once again felt courage.”

The history of the Franciscans in the Holy Land in the Custody archives still continues today to be an important mine of experience to draw on in difficult times. “The Custos of the Holy Land often uses the sources of our Custodial archives,” Fr. Narcyz continues, “as in the case of the prayer to St Anthony, which he has asked up to recite in these difficult times. It has been adapted from the prayer of the triduum to St Anthony of 1917, when the friars asked St Anthony to intercede against the threat of falling into the hands of the Turks during the Anglo-Turkish War. As thanks, on 13th June 1920, St Anthony was proclaimed the patron saint of the Custody of the Holy Land.” In 1915 as well, when Jerusalem was invaded by locusts, the friars turned to St Anthony, showing that his intercession is also useful in times of natural calamities. “Every evening after the prayer of the Vespers, we continue to pray to St Anthony and we will do so until this pandemic ends”. 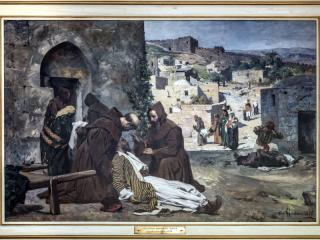 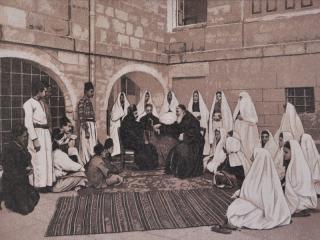 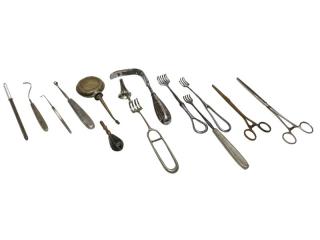 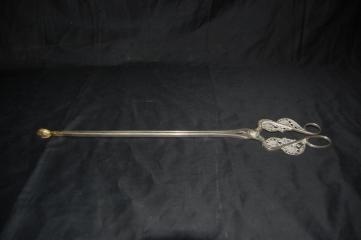 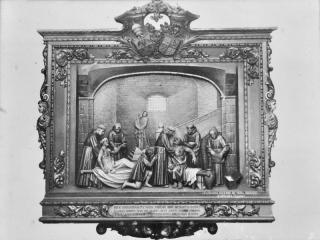 The Franciscans of the Holy Land celebrate their founder, St Francis of Assisi

Franciscan formation: three novices and eight temporary professions begin their path of life in the Custody of the Holy Land