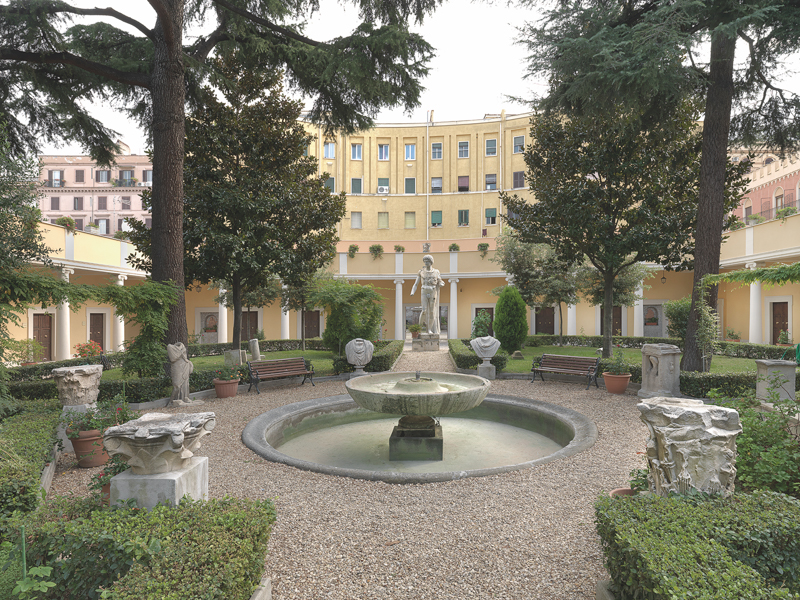 When the Friars Minor of the Custody of the Holy Land purchased the Casino Giustiniani Massimo in Rome in 1948, they did so above all with the idea of being able to offer their brothers a “home”, just a few steps from the monumental basilica of San Giovanni in Laterano, where they could stay on their trips and when studying in Italy. This is what Fr. Giuseppe Ferrari, Delegate of the Custody in Italy, writes in the introduction to the  book published by Edizioni Terra Santa which tells its story. From then on, that place with an incredible past became the head office of the Delegation of the Holy Land in Rome. The Delegation continues to play, even today, an important role of representation of the Custos in Rome for all the questions concerning relations with the Vatican in its various ministries, such as the Secretariat for State and the Congregation for the Oriental Churches.

“Since 2010 I have been in Rome as Delegate of the Custody of the Holy Land, but the story of the Delegation is far older,” explains Fr. Giuseppe Ferrari. “In the second half of the 19thcentury, the convent of Ara Coeli where the Missions Office was and which also housed a representative of the Custody of the Holy Land. In this period, the Vatican decided to establish the Congregation of the Oriental Churches and that made it necessary for the Custos of the Holy Land to have a delegate in Italy, because he did not have the possibilities of communicating with Italy that there are today.”

Later, in addition, the Minister-General of  the Order of Friars Minor wanted to start building the Antonianum University of Rome, close to where the present-day Delegation of the Holy Land’s office is today. When an office was looked for in Rome immediately after the two World Wars, the friars reported there was a building not far from the Antonianum, known as Casino Giustiniani Massimo.

Today, the Custody also puts there the friars who are studying in Rome at the different pontifical universities. “Today there are nine of us, friars, most of whom are students,” says Fr. Giuseppe Ferrari “Our convent is a slightly particular one, because we do not have a church open to the outside, and our life is marked above all by the rhythms of the students’ lives at the pontifical universities. We also host friars of the Custody who are travelling from one part of the world to another or who have to stay here for various reasons, such as for visa applications or citizenship formalities.”

The central building where the Delegation is based has also had an important history that is unknown to many people.

The building dates back to the early 17th century, to be precise between 1605 and 1618, at the behest of the Marquis Vincenzo Giustiniani (1564-1637), one of the most renowned collectors and patrons of the arts of that century. His great passion was Roman sculpture and this is why the villa, which was for official occasions, became the home of an impressive personal collection. As well as having an entrance on Via Merulana, which at the time was Via Gregoriana, the street where the great papal processions passed, with this villa (which also had a very large garden)  Giustiniani wanted to flaunt his wealth. A banker from Genoa, the Marquis Giustiniani guaranteed the payment of the artists at the papal court with his financial resources.

Later, the villa passed into the hands of the Massimo family, who at the time of the Unity of Italy, decided to divide up the land surrounding the villa. This was done and part of the Giustiniani’s sculptures were sold to France, forming the ancient collection of the Louvre Museum. Another part was appropriated by the Italian State and today is in the Museum of Rome in Palazzo Massimo.

At the end of the 19th century, it was for the well-known pictorial cycle of the Nazarenes,  which is still visible today, that the villa was famous. Princess Massimo had hosted a group of German artists who maintained that to recover Catholicism in Europe, it was necessary to return to the parameters of the Renaissance and the great Italian poem. The illustrations on the walls of three rooms remain today of the passage of the artists, with scenes taken respectively from the Divine Comedy, Orlando Furioso and Jerusalem Delivered.

Many years later, it was a nobleman from the house of Lancillotti who married a Massimo princess, owning the village in the period between the two wars. Precisely thanks to the past linked to the German artists who painted thr three rooms of the villa, Lancillotti was able to obtain a lease contract with the German embassy in Italy, housing a German cultural circle in the villa.

During the occupation of Rome, during the Second World War, it was natural for Germany to place the headquarters of the officials of the Gestapo in the villa. The street parallel to that of the villa is Via Tasso, sadly famous for having been where political prisoners captured by the Gestapo were interrogated and detained.

When peace arrived, at the end of the Second World War, the villa was looted. It was then that the building came to the attention of the friars, who were looking for an office for the Delegation of the Holy Land in Rome. Before moving in, the friars built two lateral wings,  so that there would be a chapel for the common prayer, rooms where the friars could stay and  services for the community. Since then, the villa has been the official head office of the Delegation of the Holy Land in Italy. 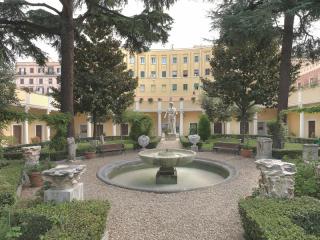 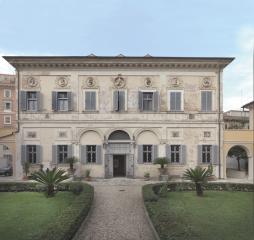 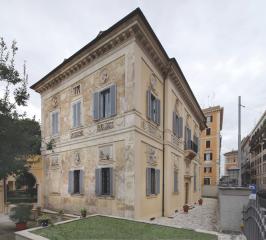 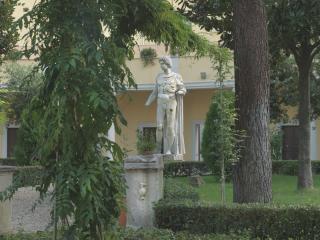