The annual prolusion for the opening of the academic year of the École biblique and of the Studium Biblicum Franciscanum (SBF), two of the most important Catholic academic institutions in the Holy Land, was held on Friday 15th November, in the Church of St Stephen at the Dominican convent and seat of the École biblique et archéologique française of Jerusalem (EBAF).

Each year, in turn, this event is hosted in one of these two venues. The first part of the event was chaired by Fr. Jean-Jaques Pérennés op, director of the EBAF and Fr. Rosario Pierri ofm, dean of the SBF. Both illustrated the events and the scholastic excursus of the academic year 2018-2019.

Fr. Rosario Pierri and Fr. Gregor Geiger of the SBF recalled the events that marked the academic year in the two seats of the institution at St Saviour and the Flagellation, the publications that marked the course of study of the various lecturers and the work that is being developed with the Terra Sancta Museum. The SBF is developing with its many students an exegetic course, studying the Biblical territory, and cataloguing and displaying the archaeological finds,  that  has a very precise identity in the panorama of Biblical studies.
Fr. Jean-Jaques Pérennés, op of the EBAF, recalled how the centenary of the foundation of the École biblique et archéologique française of Jerusalem, which took place in 1920 and its recognition by the French State,  is also celebrated on this day. As well as presenting the academic appointments which marked the year that has just ended,  he underlined how this period will be marked by the reopening of the excavations on Gaza that the Dominican archaeologists had already started several years ago.
The morning came to an end with a lecture by Prof Michel Zink of the Academy of France, general secretary of the ’”Académie des Inscriptions et Belles-Lettres”, on the topic “Preaching to simple people, a model at the birth of European literatures. Professor Zink chaired the celebrations of the centenary of the EBAF which were held in the afternoon. 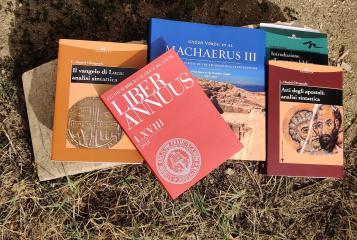 Technology at the Service of the Academic Teaching of Sacred Scripture