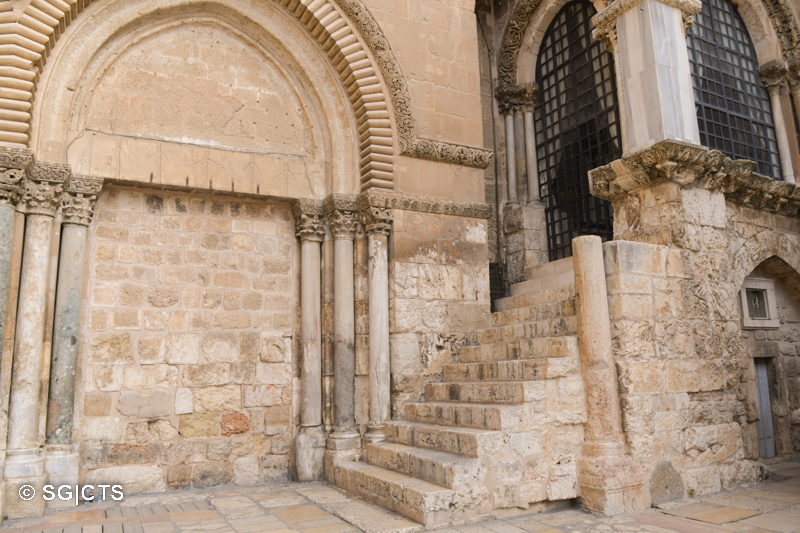 Fr. Virgilio Corbo, one of the most important archaeologists in the Holy Land, wrote that “the splendid façade of the Holy Sepulchre is one of the finest works of Crusader architecture that has been preserved in the Holy Land.” Making the entrance to the Basilica of the Holy Sepulchre in Jerusalem more peculiar is certainly the presence of the Chapel of the Franks, a gem set just behind Calvary, to which it is inseparably linked.

Overlooked by visitors to the Basilica, the history of this small space, raised above the level of the esplanade, tells the story of the events of the Basilica over the centuries.

Its building dates back to the 11th century, when the Crusaders decided to introduce a new entrance to Calvary to reduce the flow of pilgrims on the mount of the crucifixion. The fourteen steps on the side of the portal ended in an open loggia, the position of the guards who directed the entrances of the visitors to Calvary, reached through a small door decorated with columns, finely sculpted and wrought capitals and a rich decoration on the architrave and on the lunette window above.

“When Jerusalem was taken by Saladin in 1187, eleven of the twelve doors of the Basilica were walled up,”  explains fr. Stéphane Milovitch, current President of the Holy Sepulchre, “and this Crusader vestibule was also closed on three sides. It was clear that the  sultan wanted to control and manage access to the Sepulchre through the only door left open on the esplanade, the keys of which are today still in the hands of a Muslim family who inherits the prerogative.

The small loggia, having lost its original function as a passage, ended up by acquiring a new purpose and, in the attempt to assign the evangelical facts of the Passion of Christ to precise places, gradually the present-day attribution of the chapel to the Mater Dolora was reached, in memory of the immense grief of Mary at the foot of the cross. This is why the chapel was called the “Chapel of the Spasm” or of “Our Lady of Sorrows” or “of the Seven Sorrows of the Blessed Virgin Mary” (the name of “Chapel of the Franks” is more recent and comes from the habit of the other communities resident in the Sepulchre to call the Franciscans by the name of “Frank religious).

In 1635, the Custody of the Holy Land obtained the “redemption” of the Chapel and the  site, which remained physically outside the basilica, was entrusted to the friars of St Saviour’s convent. The new rights acquired are described with great precision by  Bernardino Surio, president of the Holy Sepulchre who recalled in 1666: “Our religious of St Saviour’s Convent come every day to celebrate Holy Mass. Only they have the key and keep a light lit in there.” Over the years, it was considered a privileged place for the pilgrims because through the window they could see the place of the crucifixion and obtain the benefits granted by the indulgence, by saving the tax that the porters then demanded for opening the door of the basilica.

To date the Chapel is still officiated by the friars of St Saviour and it is the habit that the keys are entrusted specifically to the secretary of the Custody of the Holy Land. “It is truly a great grace to celebrate Mass in this small Chapel, which is a place of prayer where it is possible to find a more intimate concentration, just a few metres from the rock of Calvary, especially in periods when there are more pilgrims in the Basilica,” admits fr. Alberto Joan Pari, the current secretary of the Custody of the Holy Land. “ The restoration work in 2014  restored splendour to the works of art that are there, such as the Crusader capitals, masterpieces of sculpture, the polychromatic marble floor in Comatesque style and the original mosaic decoration  which covers the arch of access to Calvary.”

The 18th century gilded wooden altar by fr. Giuseppe da S. Francisco, a Portuguese sculptor, is dominated by two winged cherubs bearing the scroll QUAE HIC STABAT DOLOROSA, ECCE MATER TUA AMOROSA. The words refer to the theme of Stabat Mater and the iconography of the sorrow of the Virgin Mary on the death of Christ is also shown on the 19th century altarpiece, where Mary, John and Mary Magdalen look at the place of the crucifixion.

At present the daily procession – which the friars of the Custody have been doing uninterruptedly since the 14th century in the Basilica – stops to remember Our Lady of the Sorrows next to the altar of the Latins, where there is the wooden statue of the Blessed Virgin Mary, donated in 1778 by Maria the Pious, Queen of Portugal. However, the Chapel of the Franks is still a special and unique place today, as centuries-old testimony of the great devotion for the place of the death of Jesus and the grief of Mary at the foot of the cross. 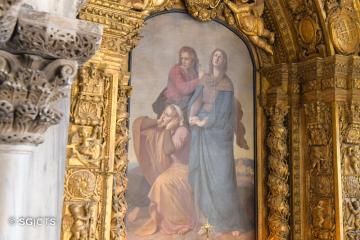 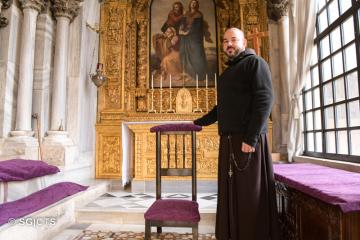 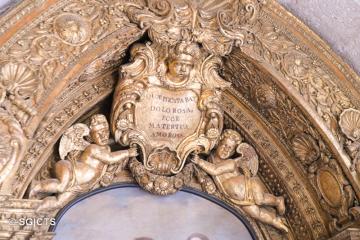 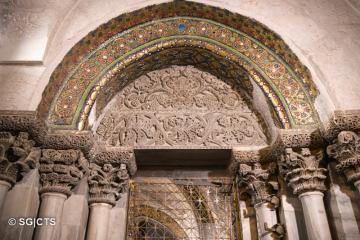 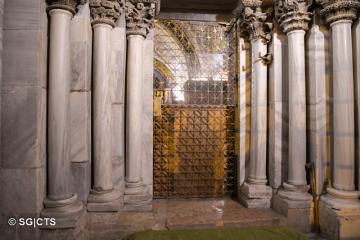 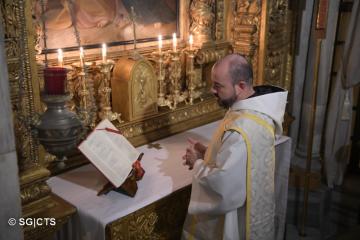 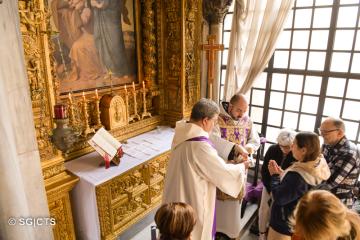 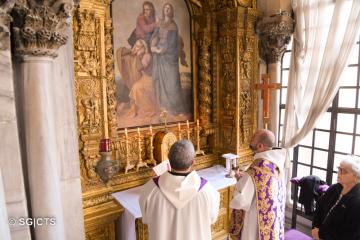 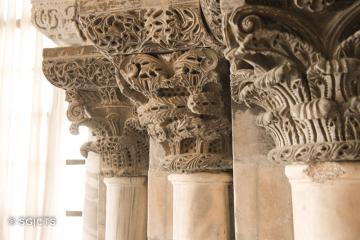 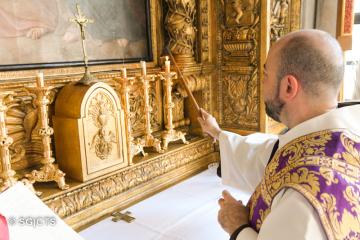 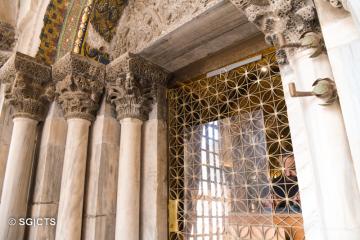 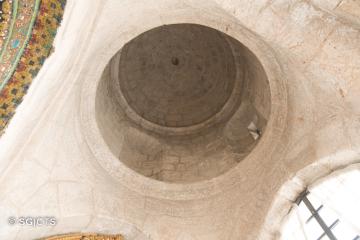 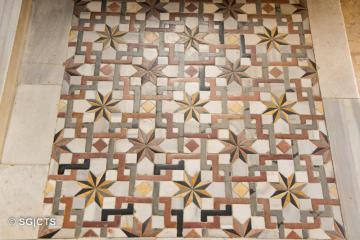 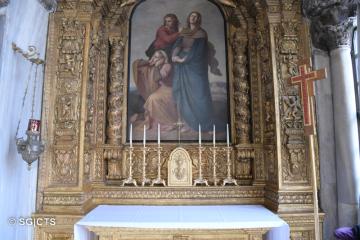 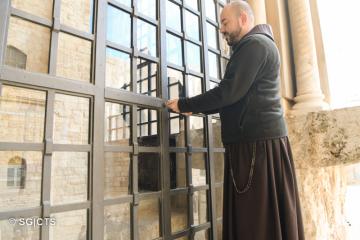 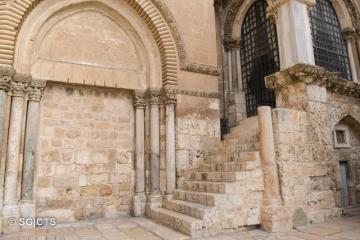 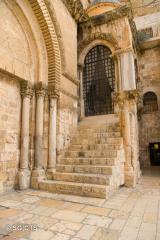