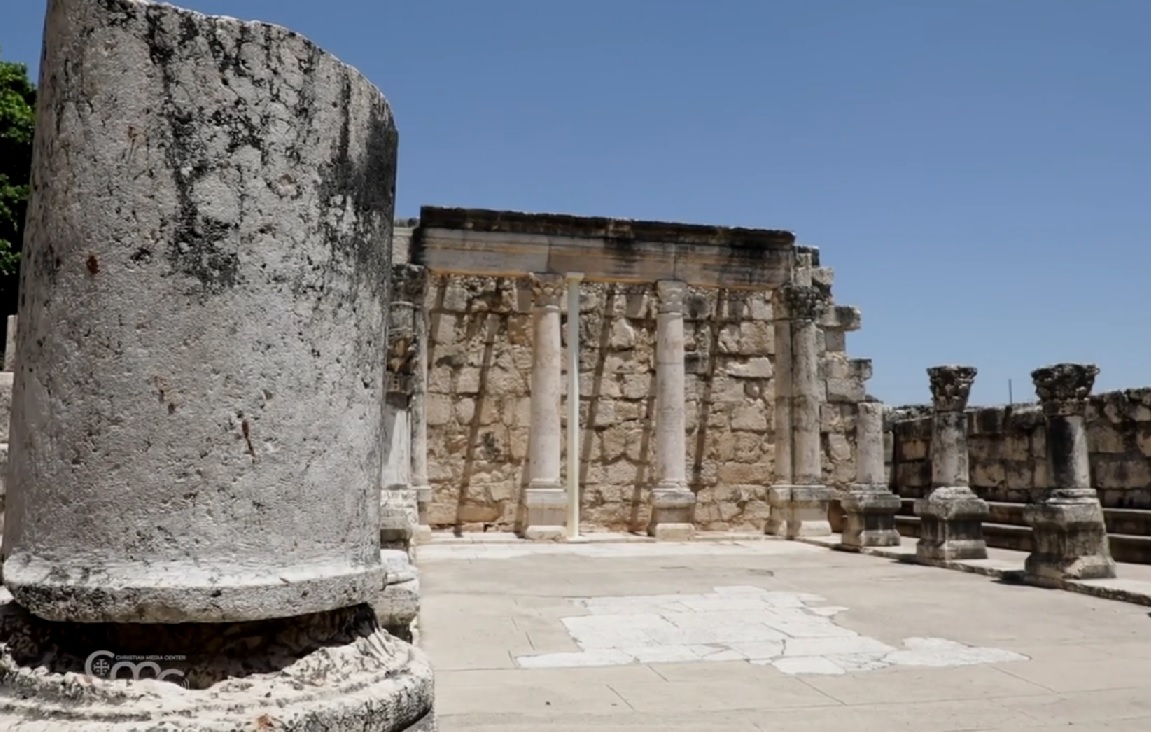 The remains of the ancient synagogue at Capernaum

Archaeological excavations in Capernaum have shown that the town existed towards the end of the Hellenistic period and developed during the early Roman period. Early Franciscan archaeologists called it "a New Testament town that has its most beautiful history in the memories of the Gospels."

It was in 1894 that the Franciscan Custody took possession of the land above the ruins of the city.

A long documented work: from 1968 to 2003 a series of reports on the twenty-three excavation campaigns carried out on the Franciscan property were compiled.

Of this town on the north-western shore of Lake Tiberias, the small quarters with their characteristic basalt stone dwellings, shops and everything that made up the furnishings of a population made up of merchants, craftsmen, fishermen and farmers have come to light.

In one of these campaigns the surprising discovery of the octagonal Byzantine church. On that occasion, the "House of Simon Peter" came to light, which became the home of Jesus and the "domus ecclesia" of the early Christian community.

Br EUGENIO ALLIATA, ofm
Archaeologist - Studium Biblicum Franciscanum
The pilgrims pass on to us this tradition, which is very old and very strong, and which archaeology can follow step by step to its origins. We consider it a solid and important tradition. The first thing to be discovered thanks to the work of Father Gaudenzio Orfali was an octagonal basilica. This discovery took place between 1910 and 1920, in a difficult period for the world.
Now this form of house, transformed into a church, is very typical of early Christianity. However, in this place it had a special significance as evidenced by the words attributed to the pilgrim Egeria, who said "A church was made on the house of the Prince of Apostles, but the walls of the house still exist as they were".

One of the witnesses to this important discovery was Brother Stanislaus Loffreda.

Br STANISLAO LOFFREDA, ofm
Archaeologist - Studium Biblicum Franciscanum
"There I really felt that as an archaeologist I had to confess, I was moved. I saw that what they had said in the literary sources corresponded accurately. The writings say that the House of Peter was turned into a church, although the walls are as they were in the past."

On 29 June 1990, the Memorial built above the House of St Peter was inaugurated in Capernaum.

Two public buildings were built in the centre of the village: the synagogue and the church.

In the basement of the monumental synagogue, vestiges of the synagogue visited by Jesus, linked to the Eucharistic promise, have come to light.

It was precisely in Capernaum that Brother Francesco Patton, Custos of the Holy Land, celebrated Holy Mass during the week in which the biblical texts recall Jesus' speech in the Synagogue "on the bread of life".

"We are in Peter's house and through the stained glass windows of this Shrine we can glimpse the place where Jesus gave his Eucharistic sermon, recorded in chapter six of the Gospel according to John.
It is a speech - the Custos underlined in his homily - that follows the great sign of the multiplication of the loaves and fishes".

Br FRANCESCO PATTON, ofm
Custos of the Holy Land
"In the house of Peter, Jesus performed many wonders and teachings.
Equally significant is the Synagogue because it is the place where, according to chapter 6 of the Gospel according to John, Jesus makes that beautiful speech, the one on the bread of life. He presents himself as the bread of life, the bread that the Father gives and which welcomes him, the life that through him the Father gives. Therefore, it becomes the speech of the Eucharistic Promise that is what we have celebrated today. And it becomes an invitation to welcome Jesus as a person. To welcome him in his word and to welcome him in the Eucharist, to be able to receive from him the gift of the Spirit. Because the Spirit - Jesus says in ch. 6 of John – is the Lord and gives life."

"And there is also another extremely significant place here just a stone's throw away. This is the lake, because the lake itself is a great shrine: this whole area has extraordinary significance. When we read the pages of the Gospels and we can visit these places, it is as if we can still see and hear Jesus and the Apostles somehow speaking and being alive."