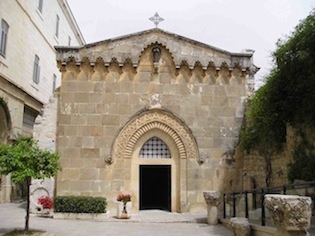 Christian tradition places here two moments from the Passion of Jesus: the flagellation and the condemnation to death. The two sanctuaries are annexed to the Franciscan convent, seat of the Studium Biblicum Franciscanum. In the floor of the Condemnation are conserved several stones of the "Lithostrotos". The imposition of the cross is indicated on the external wall of the Sanctuary of the Condemnation at the beginning of the Via Dolorosa.

The "Lithostrotos" and "Pilate’s house or pretorium where the Lord was judged" were neglected in the fourth century (according to the anonymous pilgrim from Bordeaux and Cyril of Jerusalem). In the fifth century a church was built here and we find it a little later bearing the name of Saint Sophia ("wisdom" in Greek) because "the First of the friends of wisdom there heard his condemnation" (Sophron of Jerusalem, early 7th century). Nothing is known of this church later on; the memory of the Lithostrotos was associated with Mount Zion for a time and then (at the end of the 12th century) placed near the Antonia fortress, which overlooked the Temple in the northern part of the city in the time of Christ.
The church of the Flagellation was originally built by the Crusaders in the 12th century and then was abandoned for many centuries. In 1838 it was acquired by the Franciscans and re-opened for worship, thanks to the generous gift of Maximilian of Bavaria, as is noted on a stone in its facade. The architect A. Barluzzi restored it in 1929, retaining the medievel style. Of particular note are the stained glass windows by A. Cambellotti depicting Pilate’s judgement, the flagellation of Jesus and the liberation of Barnabas. A painting (by M. Barberis) on a side wall commemorates Saint Paul’s imprisonment in the Antonia fortress.
The Sanctuary of the Condemnation was rebuilt in 1904 by Brother Wendelin Hinterkeuser on the ruins of a medievel church that had fortuitously been discovered a few years earlier. The name of the ancient church is unknown. The new one received this name because of its floor, paved with large stones, that continues beneath the neighboring Ecco Homo sanctuary, then considered part of the Lithostrotos where Pilate sat in judgement over Jesus and from where Jesus set out, carrying the cross.

Imposition of the Cross - The second station of the Way of the Cross is indicated on the external wall of the Sanctuary of the Condemnation. The first station is located in the courtyard of the el-’Omariyya Muslim school across from the Franciscan convent.

In 1923, the Studium Biblicum Franciscanum, Faculty of Biblical Science and Christian Biblical Archaeology, was established in the Flagellation convent.

Sanctuary of the Flagellation (architect A. Barluzzi, 1929)

The Struthion - an ancient cistern

So Pilate went back into the praetorium and summoned Jesus and said to him, "Are you the King of the Jews?" Jesus answered, "Do you say this on your own or have others told you about me?" Pilate answered, "I am not a Jew, am I? Your own nation and the chief priests handed you over to me. What have you done?" Jesus answered, "My kingdom does not belong to this world. If my kingdom did belong to this world, my attendants (would) be fighting to keep me from being handed over to the Jews. But as it is, my kingdom is not here." So Pilate said to him, "Then you are a king?" Jesus answered, "You say I am a king. For this I was born and for this I came into the world, to testify to the truth. [...] But you have a custom that I release one prisoner to you at Passover. Do you want me to release to you the King of the Jews?" They cried out again, "Not this one but Barabbas!"

Then Pilate took Jesus and had him scourged. And the soldiers wove a crown out of thorns and placed it on his head, and clothed him in a purple cloak, and they came to him and said, "Hail, King of the Jews!" And they struck him repeatedly. Once more Pilate went out and said to them, "Look, I am bringing him out to you, so that you may know that I find no guilt in him." So Jesus came out, wearing the crown of thorns and the purple cloak. And he said to them, "Behold, the man!" When the chief priests and the guards saw him they cried out, "Crucify him, crucify him!"

Guide. To God the Father, who gives us the confidence that our prayers are heard in his Son’s name and by the merits of his Passion, let us pray:
All. Hear us, O Lord.

1. For the Church, the mystical Body of Christ, that all baptized people may understand that Jesus’ road to Calvary is a grace and a model for every disciple. Let us pray:
2. For the civil and judicial authorities, that they may sense their grave responsibility to render to everyone his due, respecting the rights of persons and of society. Let us pray:
3. For those who are condemned to death or life imprisonment, that the innocent suffering of the Son of God might save them from despair and help them to hope in eternal life after death. Let us pray:
4. For the pilgrims who follow the Via Dolorosa, that they might experience the powerful mystery of Christ Jesus who invites us to follow him on his way of the cross. Let us pray:
5. For us on our pilgrimage, that we might learn from Jesus to forgive everyone and everything, and always to conquer evil with good. Let us pray:

Guide. O holy and just God, by the mystery of the flagellation and the condemnation of Jesus your Son, help us to grow in understanding your plan of love that enfolded our salvation in suffering. Through Christ Our Lord.
All. Amen. 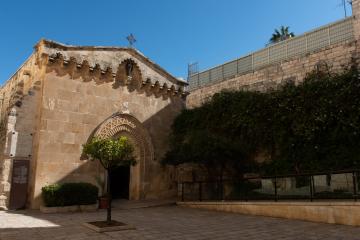 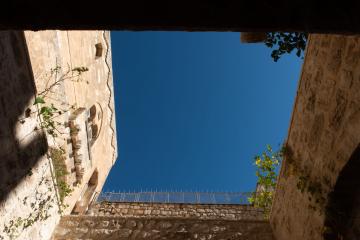 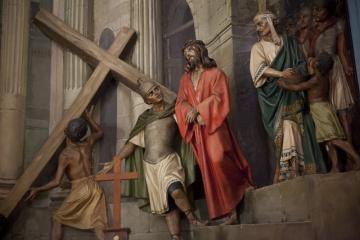 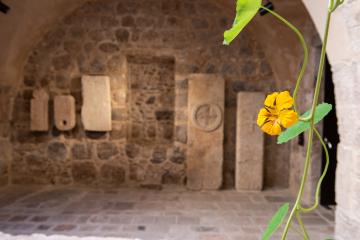 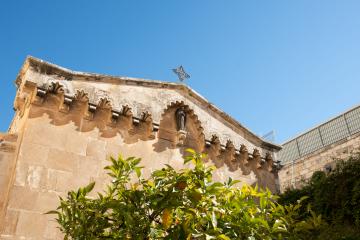 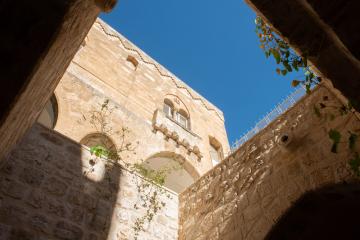 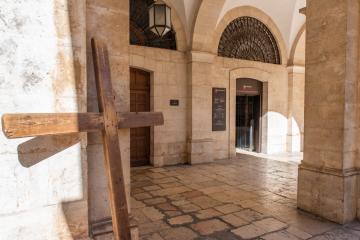 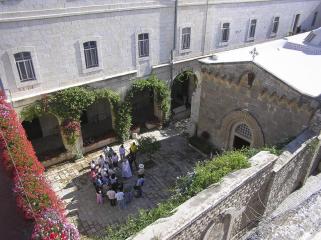