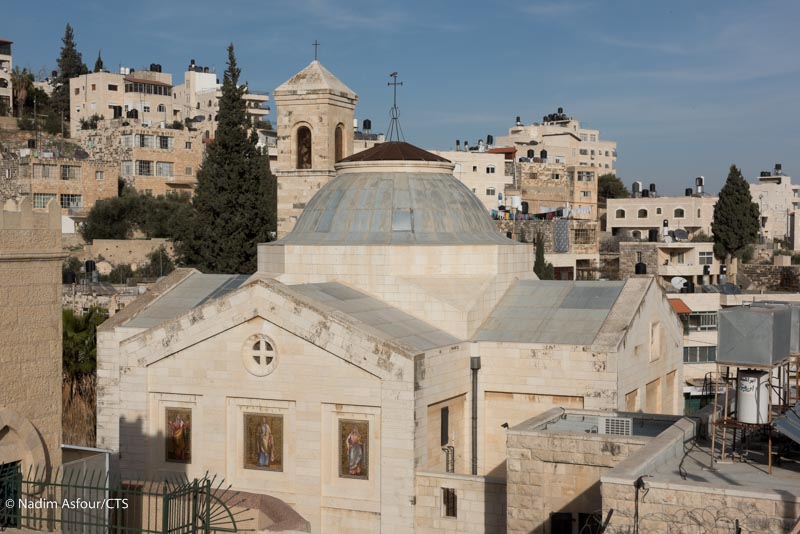 A place connected to the story of Jesus, a place of resurrection, Bethany, now called El-Azariyeh, is the village located in the current West Bank where the house of the Jesus’ friends, Martha, Mary and Lazarus, is located. We are on the road leading from Jerusalem to Jericho, on the eastern slopes of the Mount of Olives, just five kilometers from Jerusalem. The Gospel tells us that Jesus had resurrected Lazarus after he had been dead for four days, calling him to come out from the tomb where he had been placed. Today the tomb is still there: a cave carved into the rock with a mortuary that is reached by descending the steps. All of the surrounding environment, however, has changed a great deal over the years. As a holy place, there is the presence of a small fraternity of Franciscans of the Custody of the Holy Land and a 20th century church, along with some very ancient ruins.

During the recent archaeological excavations allowed through the “Betania” project , carried out by the ATS Pro Terra Sancta Association with the support of the Custos, thorough reserach was carried out to try to piece together the history of this [holy] place. Prof. Ibrahim Abu A'mar of Al-Quds University, who works as an archaeologist at the dig, said that there likely were many churches built there. The first dates back to the time of Constantine, to the the third and fourth centuries, the second would have been erected under Justinian between the fifth and sixth centuries, until the arrival of the Crusaders who partially restored and modified it. Fulk of Anjou and Queen Melisende then decided to donate the site to a community of Benedictine nuns, who established their monastery. The first abbess was Queen Melisende’s sister, Ivette. Then came the abandonment period with the advent of Saladin in 1187. The church was turned into a mosque, although some remnants of the monastery still remain today. Among them, was a building in the upper part, which looks like only one room today, but it was used as a tower and as a passage to get to the courtyard of the monastery. The Franciscans were only able to enter the sanctuary in 1613, when they obtained a construction permit for an outdoor gallery, until they bought a parcel of the land in 1889. The reconstruction of the modern church dates back to 1952-53 and Barluzzi was the architect for the project. The construction of the Franciscan monastery and the first archaeological excavations that were then abandoned also took place during those same years.

Recent excavations have brought to light new rooms and are trying to give shape to centuries and centuries of history, whose traces have yet to be unearthed. More recent history now tells us about some difficulties due to the presence of the wall built between Israel and the territories of the West Bank, making it harder to reach Bethany for pilgrims. As Fr. Eleazar Wronski told us, the fraternity of Bethany, now the Franciscan presence at the home of Lazarus, Martha and Mary, is at the service of pilgrims, “We are here to organize masses for pilgrims, but sometimes also simply to explain the local situation, such as for example the particularity that in Bethany there is no police force and it is difficult to ensure safety.” The village is, in fact, in the Palestinian territory in area B. The predominant religion is Islam and there are about 200 Christians of all denominations present here, while there are five families who attend the Catholic church, not all baptized in the Catholic rite.

From before 1800, there has been a pilgrimage to Bethany by the Custody of the Holy Land to celebrate a mass on the feast day of Saints Martha, Mary and Lazarus. The bond of Christians with this place, then, despite the challenges that have come up over the years, is still strong: Bethany remains a place where Jesus passed through and where his presence is still felt here today.

Bethany: amid difficulties and rebirth

Ceremony in Bethany marks the closing of the excavation site

Being re-born with Lazarus in Bethany