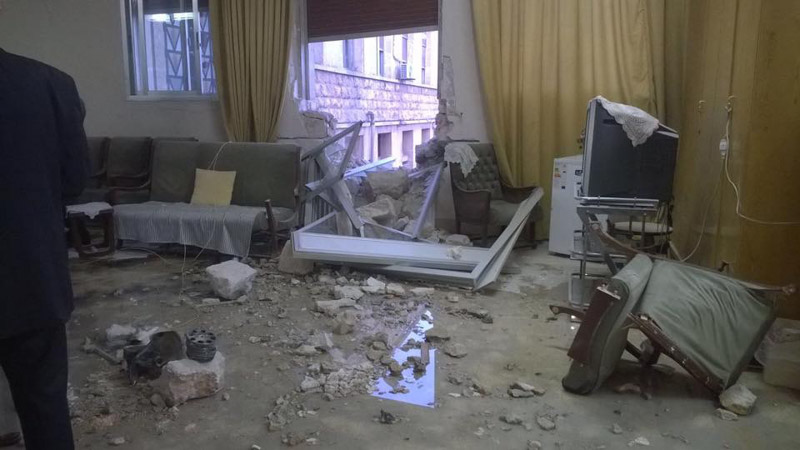 On Saturday, May 21, at 6:02 p.m. missiles fell on the Terra Santa Middle School in Aleppo, Syria. One person died and two were seriously injured, including elderly people who had sought refuge there.

Up until today, the school, with its large park, was considered to be one of the city's few safe places. And the friars had turned it into an oasis from the war that has been ravaging the city. A year ago, the Friars opened up some classrooms in order to accommodate about 20 elderly people after their homes were bombed. While some were gathered for afternoon recreation, a missile was shot through the wall.

"The explosion was extremely violent, and it was strongly felt," said Br. Firas Lutfi, OFM, the school principal, in a telephone interview with the friar in Beirut. "Apparently there is a no longer one place in Aleppo that is 100 percent safe," he lamented.

"For Christian families, said Br. Ibrahim Sabbagh, a priest from Aleppo," the Holy Land monastery is considered to be the lungs where they can come and breathe. This is where they take refuge for some fresh air and for their children to play. This is the only place where there is still a little green space left. This is also where youth groups, unable to get out of Aleppo, come to gather and organize their summer camp. We just repaired and did some maintenance work in preparation for the summer. But what happened this afternoon makes us suspend the work while we wait for a bit of peace and serenity."

In Aleppo, the friars have three centers: the St. Francis of Assisi parish, a branch of the parish Er Ram, and the Terra Santa Middle School.

Fourteen Franciscans, of whom five are in Aleppo, remain in Syria. You can sup-port them and their activities through the NGO ATS Pro Terra Sancta and the "Syria Emergency" project. Click here.