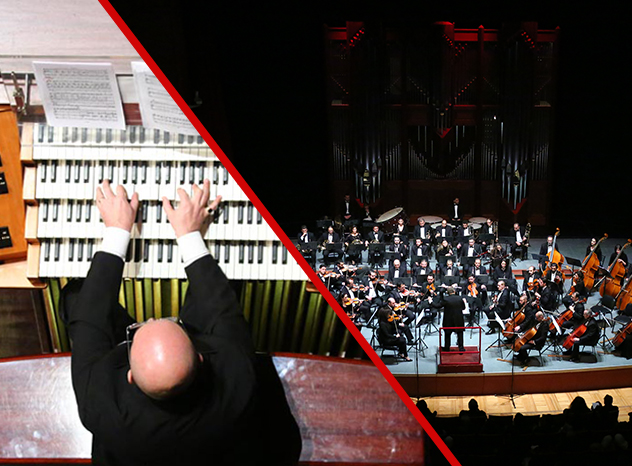 The Terra Sancta Organ Festival is the international organ music festival organized by the Custody of the Holy Land in every country where it operates. In the Middle East, the organ is perceived as a purely Christian instrument, since most organs are found almost exclusively in churches. The festival thus becomes an opportunity to come together, and to invite music lovers to church, regardless of their religious affiliation.

The winter season of the Terra Sancta Organ Festival took place in Lebanon and Syria from January 29 until February 15, 2017. In Lebanon, the festival is organized with Notre Dame University, and it is called the Semaine de l'Orgue au Liban (Lebanese Organ Week). In Syria, it is called the Damascus Pipe Organ Week and it is organized together with the Higher Institute of Music, and in collaboration with the Damascus Opera House.

In recent years, Lebanon has been experiencing a renewed interest in the greatest of all musical instruments: many organs have been restored and new ones are being built. Lebanese Organ Week is an incentive for this renaissance that has brought together internationally acclaimed organists, like Swiss organist Jean-Christophe Geiser at the Basilica of the Miraculous Medal, the Italian organist Cosimo Prontera at Notre Dame Church of Louaize, the American organist Crista Miller in the auditorium of the American University of Beirut, the French organist Marie-Bernadette Duforcet at the church of the College of the Sacred Heart and the Austrian organist Bernhard Gfrerer at the National Evangelical church in Beirut.

In Syria, where the Franciscan friars have been present since the thirteenth century, the Terra Sancta Organ Festival is the only international festival that is active in the country during the war, as a sign of solidarity that goes beyond the emergency situation. The initiative, which is being carried out for the second time around, is greatly appreciated. According to the Apostolic Nuncio to Syria, H.E. Card. Mario Zenari, “people need to find these moments of spiritual relief and music can help tremendously. We have heard too many rumors about wars, bombs, mortars falling on Damascus and this music frees us from these anxieties; it helps to elevate the soul and unites everyone in a language that requires no translation. There is a need for evenings like these and I hope that there will be others.”

What is the purpose of music in times of war? For Missak Baghdboudarian, the director of the Syrian National Symphony Orchestra, “war has taught us that life must go on and how important music is in times of war for society and for all of humanity. During war, we lose our positive side, our humanity. Only music manages to awaken the human part of our society and that is why we continue to work in spite of all of the challenges we encounter every day at every level. As musicians, our mission is to continue to work to keep society alive and to keep music alive in Syria.”

The response by Syrians was enthusiastic and the spectators crowded the four concerts, which were held in the modern Damascus Opera House (one of the few theaters in the Middle East with an adjacent monumental pipe organ), and at the Franciscan churches of St. Anthony and St. Paul in Damascus. Local institutions made available the Syrian National Symphony Orchestra conducted by Missak Baghdboudarian, in addition to the Damascus Baroque Soloist ensemble, as well as the orchestra and the chorus from the Higher Institute of Music conducted by the André Malouli, the conservatory director. The international guest for the Damascus Pipe Organ Week was Eugenio Maria Fagiani, an Italian organist from the Giuseppe Verdi Symphony Orchestra of Milan, who performed on February 9 at the Damascus Opera House with the Syrian National Symphony Orchestra and on the following day on the organ at the church of St. Anthony's.

Terra Sancta Organ Festival:  all the concerts on the internet

End of the academic year at the Magnificat Institute