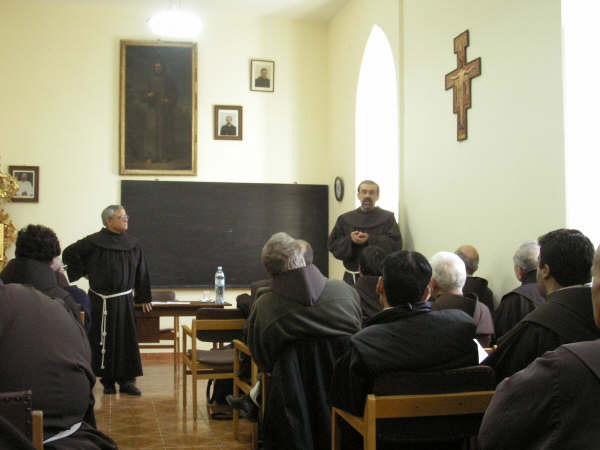 The Church entrusted the custody of the Holy Places to the Franciscan Order in 1342.

Through the centuries the sons of Saint Francis have worked tirelessly to recover, preserve and enliven the sites wherein laid the roots of our Christian origins. These places are the Sanctuaries, the shrines placed upon the most precious site of Christendom. Jesus, Mary, the apostles and other great protagonists of the story of salvation, sanctified these sites. This is why the Franciscans call the Holy Land, “the Pearl of the Missions.” Popes have always admitted that the sons of St. Francis have fulfilled their mission following upon the charisma of their Father and that, in spite of many difficulties; they have rendered a “truly evangelical” service. In order to upgrade the service, given in the sanctuaries, to modern day requirements a meeting was held on the 23rd February at the St. John the Baptist Convent in Ain Karem. All those responsible for the Sanctuaries and the respective sacristans attended the meeting.

Fra Pierbattista Pizzaballa, Custos of the Holy Land, expounded the aims of the meeting. Subsequently, Fra Artemio Vitores, Custodial Vicar, held a conference that dealt with “The Franciscan Charisma and the Holy Places”, in which, speaking of the various aspects of the service in the sanctuaries, he dwelt upon the charisma that has animated the Franciscan mission in the Holy Land. Fra Raffaello Tonello gave a talk dealing with, “The pastoral-liturgical aspect of the Sanctuary and the welcome of pilgrims: Practical elements.” The speaker defined the importance of the service in the sanctuaries of the Holy Land as well as the value of the welcome given to the pilgrims. The first part of the meeting was brought to a close with Mass, presided by Father Custos. After lunch, the brothers met in workshop sessions. They analyzed the many problems they faced to be able to present some proposals that were discussed during the conclusive plenary assembly. This meeting of sacristans was brought to a close with the chanting of evensong, together with the St John the Baptist fraternity.

The participants returned to the Holy Places of our salvation to offer their services so that the pilgrims and the Christians of the Holy Land may meet Christ in those Holy Places in which He revealed himself.