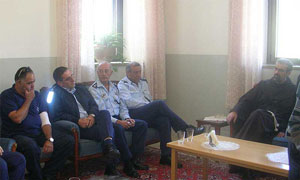 Fr. Custos, Pierbattista Pizzaballa, on Monday, March the 6th, met the family re-sponsible for the attack committed in the Basilica of Nazareth, last Friday night, the 3rd of March.

The Custos said: “I was wondering what should I do. First I hesitated. The pressure coming from the mass media did not make me feel at ease. I thought they intended to make a spectacle out of the event. On the other hand, I had the desire to meet the family, to listen to them, to understand and forgive them. I think that, being in charge of the Holy Places, we have a serious responsibility to behave in accordance with the Christian message. The voice of peace is that of forgive-ness. The readings of today’s Mass are the following; first in Leviticus (19, 11-18):”You shall not hate in your heart anyone of your kin”. And in the gospel of today (Mt 25, 31-46): “Just as you did it to one of the least of these brothers of mine, you did it to me”. These words were for me a stepping-stone. It was really what the Lord expected from us”, said the Custos.

The encounter took place in the Police Station of Nazareth, where the couple and their daughter are still under police custody. The media pressure was such that Fr. Custos could see them in private only for a few minutes. To the question repeated twice, of why they committed an attack against a church, the Custos could not tell more than this: “They cannot explain what happened. She (Violette Habibi) insists upon the fact she is a Christian. The family is at a loss. They are suffering because one of their children was taken from them by the social services. Really, they are poor people. I was deeply touched. They asked pardon for what they did and I granted it.”