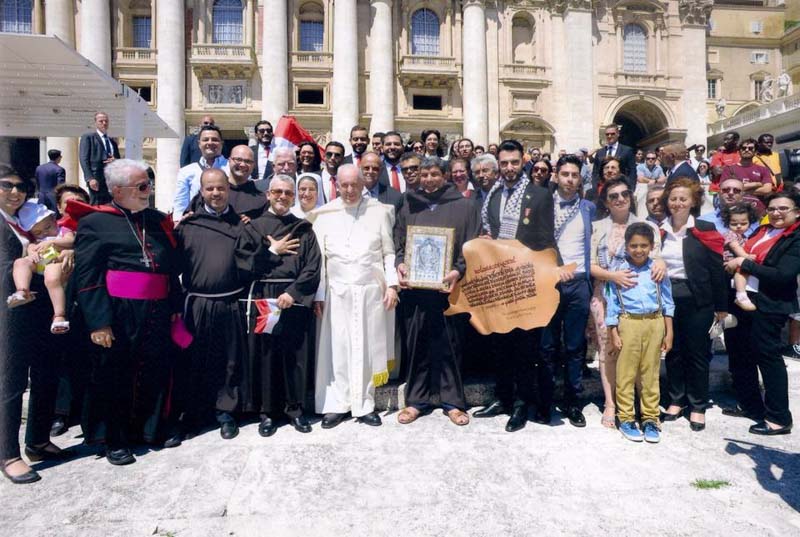 The “In Perfetta Letizia” project, carried out on the occasion of the 800 years of the Franciscan presence in the Holy Land and in memory of the historic meeting in Damietta, Egypt, between St. Francis and the Sultan Malik al Kamel, concluded with great success. [This is]an important project, a traveling journey, with the intention of helping people relive and spread the spirit of love and peace of the Poor Man from Assisi, St. Francis.
Br. Ibrahim Faltas, the creator of the project, wrote a travel diary, from which we will share some excerpts.

From June 26 to July 6, we went on pilgrimage to several Italian cities, bringing our message through song, witness, prayer and gathering with many people, intrigued to see a group like ours, which represented places unknown to many, but known for news of wars and conflict. Our pilgrimage had some very special protagonists, witnesses of the places where the Franciscan presence currently still carries out its service and its mission with passion and love. Br. Botros Daniel from the Church of St. Joseph in Cairo, Egypt, Br. Shadi Bader from Syria, Br. Samahar Ishak from Lebanon, and myself, Br. Ibrahim Faltas, from the Holy Land all worked together on this project. We tried to bring this pilgrimage to life by holding as an icon the expression of St. Francis’ vow: “In Perfetta Letizia.” Representing Palestine were the singer Yacoub Shaanen and the young man, Milad Fatouleh of Bethlehem. Together with them, the tour also featured an Egyptian choral group from Cairo.

The Egyptian choir was founded in 1989 under the prestigious leadership of Br. Boutros Danial, from St. Joseph's Church in Cairo, and of Magdouline Michel. In 2017, the choir sang during the apostolic journey of His Holiness Pope Francis to Cairo, in the presence of His Holiness Pope Tawadros.
Many people helped us in this project: the Bishop of Grosseto, Rodolfo Cetoloni, Fr. Emilio Lingiardi, Fr. Antonio di Chiusi, the John Paul II Foundation, the Brunello and Federica Cucinelli Foundation, Stefano Cimicchi's “Cogesta,” “Strana Compagnia” from Orvieto, “Oasis of Peace” and “Diomira Travel” by Adriana Sigilli, who coordinated the entire project and who followed and accompanied the Egyptian choir to all of the events in Italy.

Our first important meeting was in Rome, in St. Peter’s Square, where, led by H.E. Rodolfo Cetoloni, the bishop of Grosseto, we were in audience with Pope Francis. To our great joy, the Holy Father came among us for a picture and we received his blessing, to continue to carry along our path, the “Perfetta Letizia,” that St. Francis left to the world. We gave Pope Francis a precious gift, an icon representing the meeting of St. Francis and the Sultan, manufactured by a mother of pearl workshop in Bethlehem through a method that dates back to 250 years ago, which we took up again with great success: a true masterpiece!

The Egyptian choral performed in their first concert in Solomeo, near Perugia, in St. Bartholomew’s Church, hosted by the “Brunello Cucinelli” Foundation, with a rich musical program and songs in different languages.
Our journey continued in Assisi. An intense day full of emotion, in the city of the Poor Man, the city of peace, where we celebrated mass in the Lower Basilica and prayed at the Tomb of Saint Francis. They were led in the Franciscan spirituality by Br. Domenico Paoletti, Vicar of the Sacred Convent.


In (the city of) Milan, in the largest and most important Italian diocese, we were welcomed by the Archbishop, H.E. Mario Delpini, who gave us a special greeting, by blessing our project, so that it may continue to bring dialogues of knowledge and peace and to break down every type of prejudice, thus spreading the joy of the Christian life.

Our pilgrimage took us to the small but pleasant and welcoming city of Crema, where we were guests of Emilio Lingiardi. In addition to the institutional meetings with the Mayor of Crema, Stefania Bonaldi and with the Bishop Daniele Giannotti, who welcomed all of us, the experience of Crema was characterized by a prayer during the sung masses and by the witness of us, the Franciscan friars.
Waiting for us at Chiusi, was Fr. Antonio, who prepared a big surprise for us. We participated together with the locals, in the presence of Bishop Stefano Manetti, at the patron saint feast of St. Mustiola.

And after having traveled a long way from Rome, Assisi, Perugia, Milan, Crema, Chiusi, here we are at the final stage of our special pilgrimage: Orvieto. Our pilgrimage in “Perfetta Letizia” ended with art, nature, beauty and spirituality, as guests of Stefano Cimicchi and of the “Strana Compagnia.” Before the concert at the Duomo, the two friars of the Custody of the Holy Land gave their own witness: Br. Shadi Bader, a friar from Jordan who currently lives in Latakia in Syria, and Br. Samhar Ishak, a young Syrian, who, after his experience in Aleppo, presently serves in Lebanon doing spiritual formation and and life mission for young Syrian refugees. The message that Fr. Shadi and Br. Samhar brought was very impactful, because from the simplicity and joy of being Franciscans, in the light of the Gospel, we can turn dark days into days of light and hope.

At the end of this experience, I would like to recall that the historic meeting between St. Francis and the Sultan of Egypt, which took place in Damietta near Cairo, was one of the most extraordinary gestures of peace in history—which is still significant and relevant today for interreligious dialogue, so much so as to remain the exclusive event that indicates the route from which to start to search for understanding and harmony between the East and the West. Even today, as we all know, hostility and enmity are still present. If we want a new world of dialogue, today more than ever, we must start over with the example of the Poor Man from Assisi.