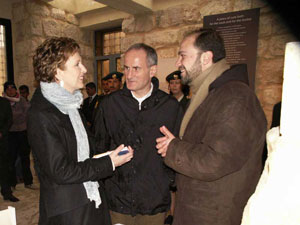 On her return from Saudi Arabia, Ms. MacAleese, President of the Irish Republic, expressed her wish of visiting Mount Nebo. A somewhat high spirituality in this business trip. Also it is not the President’s first visit to the holy place. But the 15th February visit was a private one in which Mary MacAleese listened attentively to the explanations given by Fra Ibrahim while holding hand in hand with her husband. Fra Ibrahim, substituting for the absent Fra Michele Piccirillo, Guardian of the place, had arrived purposely from Amman to welcome the distinguished guests.

A ‘small’ delegation, comprising some ministers and Irish business men, accompanied the presidential couple. As is usual in such occasions, Fra Ibrahim meant to invite the delegation to refreshments in the convent. But the co-ordinator for the Jordanian Royal Palace formally vetoed this offer. The time was limited and it was impossible to have this deviation. Fra Ibrahim engaged in long discussions … the matter seemed to be non-actionable.

There was no success either with the Irish co-ordinator of the President’s engagements. In both their views it was necessary to respect totally the previously established timetable of the programme. Notwithstanding all this, once on Mount Nebo, Ms MacAleese made no effort to hide her joy of being there.

One could see her relishing the moments of truce, moments brimfull with significance for this Catholic woman who does note hide her convictions. The weather, that was turning into a tempest, did however allow her to see the Promised Land; in the Jordan River Valley one could clearly distinguish the Dead Sea and the Judean Mountains. While the rain increased in intensity they moved towards the church. The mosaics excited the admiration of the presidential couple, who gently resisted the pressures of the organizers. When the rain eventually turned into a deluge, the museum became the appropriate refuge for the visitors. There Ms MacAleeese signed the Franciscan golden book, before departing towards the Baptisimal Site and later on to Amman from where she took off on her return t Europe that same evening.