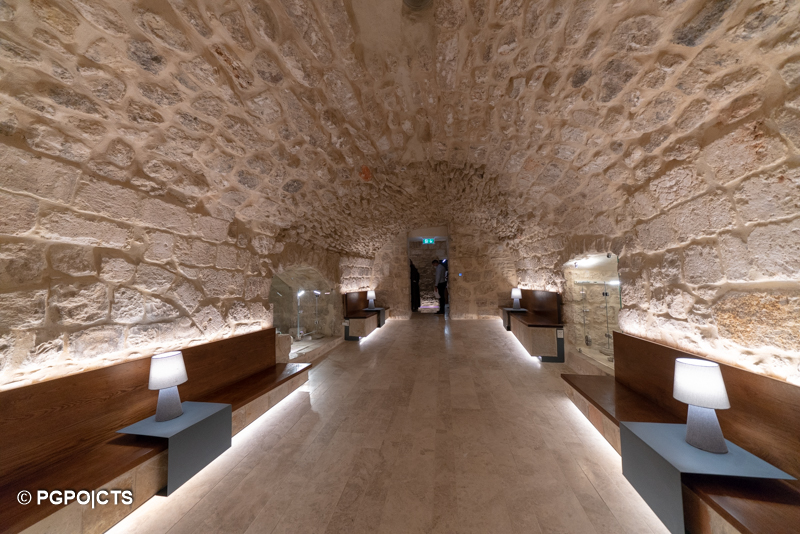 Its foundations date back to almost to thousand years ago and its walls have seen centuries of history of the Holy City flow by. The complex of Dar al-Consul, in the heart of the Old City of Jerusalem, shines once again, after years of work. The inauguration of the ancient arched rooms and of the new restored spaces was held on Tuesday 9 November, coordinated by the Custody of the Holy Land, which owns the building and coordinated the works. In addition to the Custos of the Holy Land, Fr. Francesco Patton, some important partners of the project were also present, represented by Dr. Sven Kuhn von Burgsdorff, Head of the Delegation of the European Union,  Dr. El-Sahakra, Country Head of the UN-Habitat programme and Dr. Imad Al Khatib, Vice President of the Jerusalem Campus of Al Quds University.

The name of the complex comes from its illustrious past: in 1856 it was enlarged to house the Prussian consulate and the residence of the consul. ‘Dar al-Consul’ effectively means “House of the Consul” in Arabic and this is how the building is still known today. Standing on an area of about 2400 square metres, it is bounded by Khan El Zeit Street, where there are the shops of the Suq, the Old City market, and El Tikkyeh Street, the street of the entrance.

Dar al-Consul today houses a number of apartments for the local Christian community on the upper floors, as well as a vast space on the ground floor which has been completely renovated.

Due to the great humidity and wear caused by time, the Custody of the Holy Land  had decided in 2013 to start restoration work both in the homes of the families and in the areas beneath. Thanks to the support of the European Union, the United Nations and thanks to the collaboration with Al Quds University, Dar al-Consul has a new face and an ambitious project for its future, in which the local community, but not only, is involved.

The future of Dar al-Consul

“The idea is to welcome pilgrims, so that they can enjoy this marvel, but also provide a space for our young people, so that they can be trained to develop projects of virtual reality and a space where local food can be tasted,” explains Fr. Ramzi Sidawi, the treasurer of the Custody of the Holy Land.

The objective is to make Dar al-Consul a tourist centre, a museum, a bookshop or an area for shops and restaurants, creating job opportunities for the local Christians. At the same time it will also become a centre for vocational training, that offers the local youngsters career guidance services and is also an incubator for start-ups or a co-working space.

Satisfaction was expressed by Dr. Sven Kuhn von Burgsdorff, Head of the European Union Delegation: “It will be a place for young Palestinians who are trying to find a path of their own and live in a harsh and difficult situation. This place will provide services for young people, but also for visitors and pilgrims.”

Dr. El-Sahakra, Country Head of the UN-Habitat programme, hoped that Dar al-Consul can be an important centre for the Old City, a place to celebrate Palestinian culture and a place to develop the leadership and talents of the local youngsters.

“Here at Dar al-Consul it is like seeing in a film the past of the Old City of Jerusalem and we are proud to be part of this project with our students,” said Dr. Imad Al Khatib, Vice President of the Jerusalem Campus for Al Quds University.

“Dar al-Consul not only holds the “simple stones” of the Holy Land, but speaks of the future. With the conclusion of the work, those stones shine now (literally speaking) and show the scenario of the future,” said the Custos of the Holy Land. “Young people, the future of this land, can now take part in initiatives, training courses and productions that add value and experience to religious and non-religious tourism of the Old City in the rooms of Dar al-Consul, which in turn will bring an economic boost, progress and opportunities for the Old City and Jerusalem as a whole.”

The Custos of the Holy Land also emphasized the importance of preserving the homes of the local Christians who live in Dar al-Consul, to keep the Christian presence in the Old City, which together with the Muslim and Jewish one make up the identity of Jerusalem.

The past of Dar al-Consul

According to a report by the Israeli Authority for antiquities, in January 2019, rescue excavation was carried out at Dar el-Consul, following the discovery of remains during the inspection, The excavation, funded by the Custody and directed by David Gellman, with the assistance of other members of the Israeli Authority for antiquities, reveals a burial grotto dug into the rock from the late Iron Age, which was damaged by subsequent disturbances and the remains of a room built with five phases of construction  dating back to the Abbasid period (from 750 to 1258) up to the Mameluke period (1250–1517).

The Hypothesis of Al Quds University of Jerusalem is that Dar al-Consul could have been  founded on Byzantine and Roman structures in the Eastern part of the Cardo Massimo, built by the Emperor Hadrian in 132-135. The building would have undergone various transformations in time, as shown by the archaeological finds.

In the Middle Ages, this part of the Old Coty was for money-changers’ shops, while in the 16th century it seems that the complex of Dar al-Consul was used as a soap factory, with this activity believed to have continued until the 18th century. In the 19th century, the building was probably transformed into stables, before passing into the hands of the Latin Patriarchate of Jerusalem in 1882, which then transferred it to the Custody of the Holy Land. 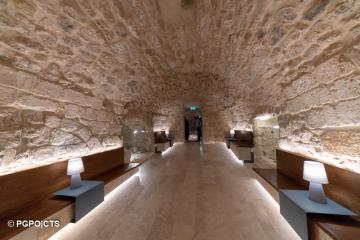 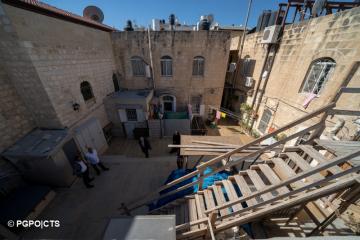 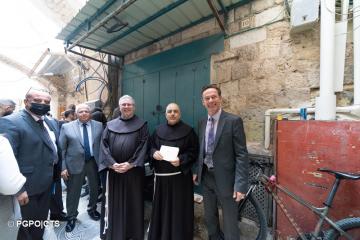 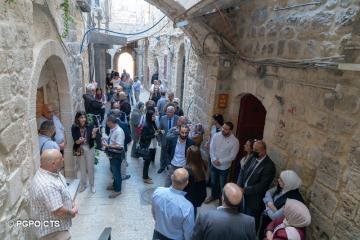 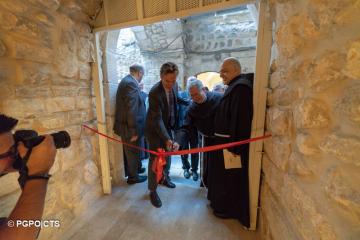 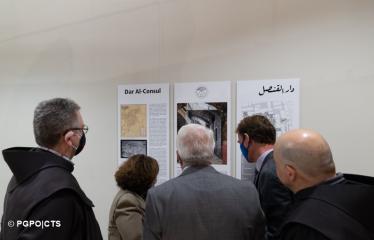 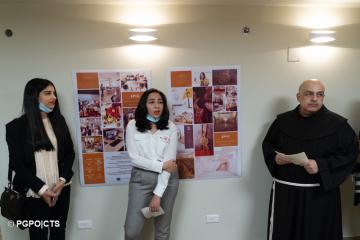 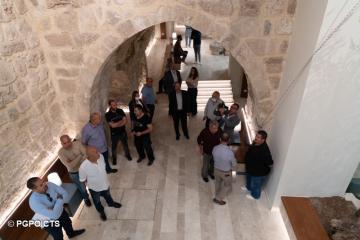 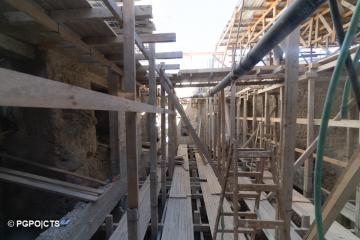 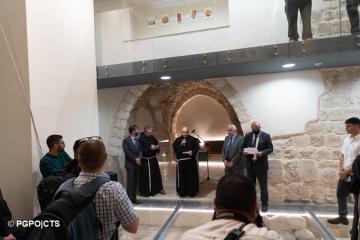 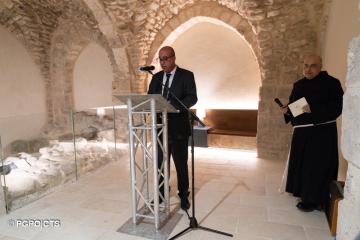 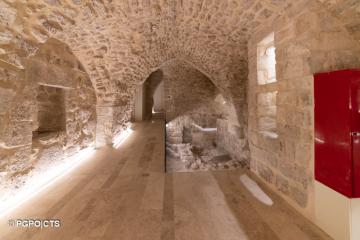 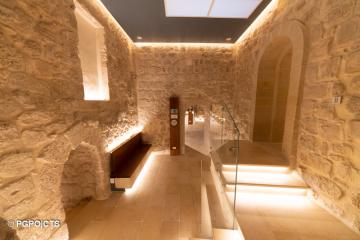 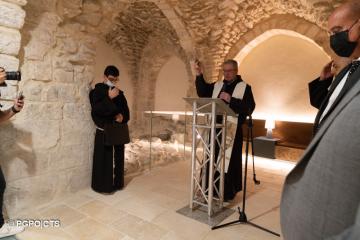 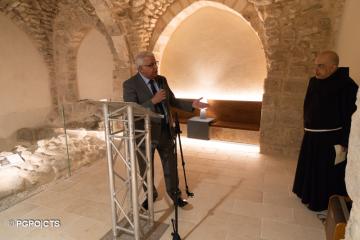 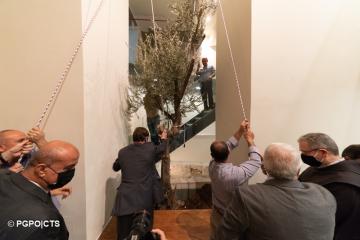 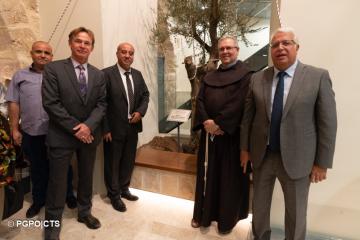 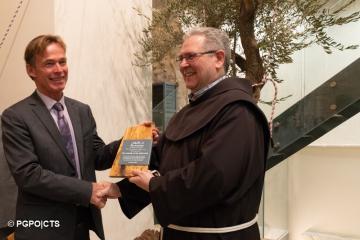 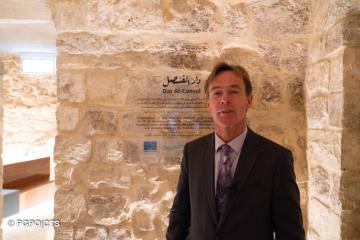 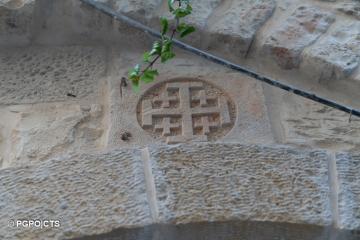 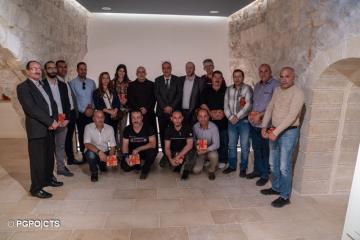 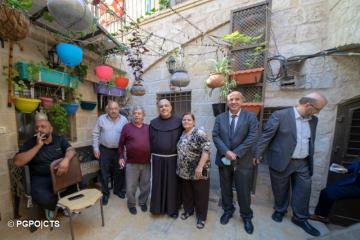 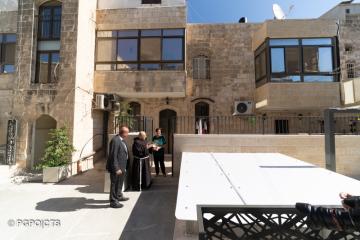