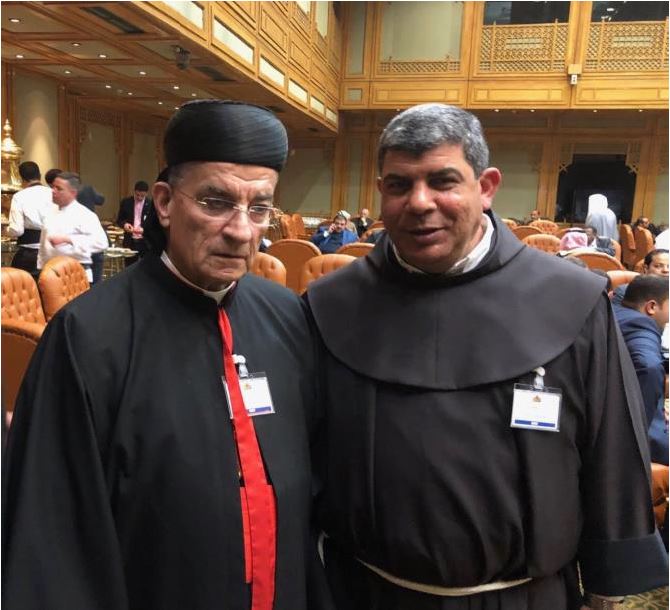 On January 17 and 18, 2018, an international conference on the topic of Jerusalem was held in Cairo, to which the Custody of the Holy Land was also invited; Br. Ibrahim Faltas participated on behalf of the Custody.

Almost a month after of U.S. President Donald Trump’s decision to move the US Embassy to Jerusalem, Al-Azhar, the most important institution in the world of Sunni Islamic studies, brought together the various voices affected by this decision.
Present at the opening of the conference were the Apostolic Nuncio to Egypt, Bruno Musarò, and Pastor Olav Fykse Tveit, the Secretary General of the World Council of Churches. There were numerous Islamic and Christian delegations present as well, including the various representatives of the Arab League. For Christians, there was the strong presence of the Lebanese Church, with Cardinal Bishara El-Rai, and representatives of the Church of Jerusalem, including the Catholic, Lutheran and Greek Orthodox churches.

The important meeting in Cairo gathered delegations from 86 countries, with more than 65 speakers, who initiated a very strong and intense debate about Jerusalem’s future. The conference addressed three main themes: affirming the Arab status of Jerusalem, raising awareness about the Jerusalem question, and highlighting the responsibility of the international community toward the Holy City, which is important to Christians, Jews and Muslims.

Pope Francis, who was invited to the conference, sent a message to the Great Imam of Al-Azhar, Ahmad Al-Tayyib, which was read in Arabic by Mons. Gaid Yoannis, the pope’s personal secretary:
“The Holy See, for its part, will not cease to urgently call for a resumption of dialogue between Israelis and Palestinians for a negotiated solution, aimed at the peaceful coexistence of two states within the borders agreed upon by them and recognized by the international community, in full respect of the unique nature of Jerusalem, whose meaning goes beyond any territorial issues. Only a special statute, which must also be internationally guaranteed, can preserve its identity, and its unique vocation as a place of peace to which all Holy Places aspire, as well as its universal value, thus allowing a future of reconciliation and hope for the entire region . This is the only aspiration of those who profess to be authentic believers and who never tire to implore, through prayer, a future of brotherhood for all. With these sentiments, I am pleased to renew my cordial greetings, invoking from the Most High every blessing on your person and for the great level responsibility that you have.”

In his message the great Imam of Al-Azhar Sheikh Ahmad Al-Tayyib, who organized this important conference on the topic of Jerusalem with determination, announced that the year 2018 will be the year of Jerusalem, and that many educational activities will be carried out in the area in order to make young people aware of the importance of Jerusalem’s history and holiness.
During the conference, Br. Ibrahim Faltas was interviewed by Arab journalists and television stations, spreading the Franciscan message, starting from the meeting in Damietta, between St. Francis and the Sultan, and explaining how the Franciscans are celebrating 800 years of their presence in the Holy Land. Br. Ibrahim was greatly surprised to find out that many Arab journalists did not know the history of the Franciscan presence in the Holy Land.

Br. Ibrahim said that at the two-day conference, after listening to 65 speeches about Jerusalem, one particularly struck him: the one given by the representative of Kuwait, who said: “If for Muslims Mecca represents the center of their faith, and if for Christians the center is the Vatican, Jerusalem is the center for all.”

Br. Ibrahim’s final reflection was that “for centuries, we Franciscans have been committed to preserving the holy places and to commemorating salvation, and we have lived through these 800 years, as well as wars and dominations, which have changed the territory. Today we are called to another challenge: to preserve the Christian presence in Jerusalem, and once again we leave Egypt, like we did at the beginning, starting with St. Francis’ meeting in Damietta with the Sultan, to spread peace, which is possible for all, through dialogue.”