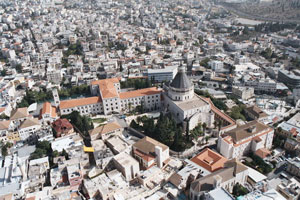 The Franciscans of the Custody of the Holy Land have received reports from the Guardian of our friary at the Basilica of the Annunciation in Nazareth that at 5:30 pm this afternoon (March 3) several persons entered the Basilica and set off some small explosive devices causing some minor damage. The local community and some pilgrims were praying the Way of the Cross in the Upper Church when the fireworks like explosives were detonated in the lower church. Apparently no one was injured in the explosions, although there have been subsequent unconfirmed reports that some people were injured in the demonstrations and the police actions that followed.

Many local people, Christians and Moslems, joined those in the Basilica to express their anger at the attack.

Fr. Pierbattista Pizzaballa, Custos of the Holy Land, expressed sadness at this attack on one of the most sacred shrines in the holy land, and appealed for calm until all the details are known.

The Custody of the Holy Land has been informed by the Israeli police that at this time there is no evidence that the attack was motivated by anti-Christian sentiments.