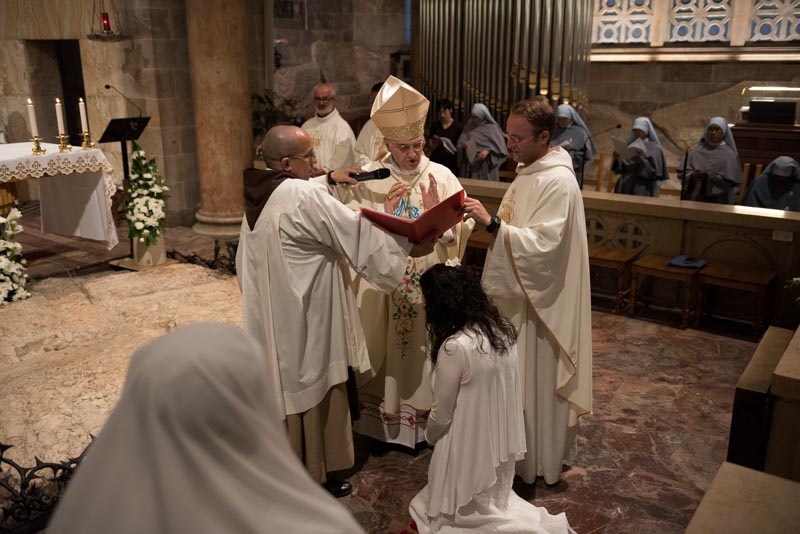 You can barely see a bit of light on the horizon, when life begins to bustle at the Basilica in Gethsemane. In the church, located at the foot of the Mount of Olives, Br. Diego and four other friars gather at six in the morning for the mass and praises. The sense of strong spirituality that is felt here is similar to other sanctuaries belonging to the Custody of the Holy Land, but here one feels perhaps even closer to Jesus. The particularity of this place comes from the rocks on which the building is constructed: the same ones on which Jesus prayed at the hour of his Passion and same ones on which his drops of sweat and blood fell. In this place, lifting up one's prayers to God and listening to his voice takes on a different meaning. Coming here means choosing the same place as Christ to speak with the Father, and responding to the invitation made to his disciples: “Stay here, and keep watch with me.”

With the intention of offering a space for silence and prayer, the Custody of the Holy Land opened the hermitage in Gethsemane to pilgrims; it is located a little higher up than the Basilica. It is not just a resting spot, but a place to stop and reflect on one’s own life in God’s light. Br. Diego has managed the hermitage since 2009, after the passing of Fr. Giorgio, the Franciscan who first wanted to construct hermitages, instead small old stables. Those who are housed here are referred to as hermits and are given a room with a bathroom and stove, so that they can remain independent for their entire stay. Leaving time to listen, to be alone and to respect silence are, in fact, prerogatives for life at the hermitage.

“Living here means fully understanding the words of the Benedictus: ‘the great mercy of our God will visit us like a sun that comes from above,’” recounted Br. Diego. After mass, in fact, the sun had already risen, but the sanctuary was still in the mountain’s shadow. The light first beamed on the crosses of the Holy Sepulcher, on the opposite side of the hermitage behind the walls of the city, and then it started to slowly radiate from the of the walls until it reached the rocks in Gethsemane.

Around the hermits’ small accommodations, there is a beautiful garden with olive trees and flowers. Inside, one can find the common room and the Lectio hall, where at 8:00 a.m. one meditates on a passage from the Scriptures. The afternoon is marked by the adoration of the Blessed Sacrament in the chapel at 5:30 p.m. and then by Vespers at 6:30 p.m. Those who want to be helpful are also given practical maintenance jobs at the sanctuary. What is offered here is a simple lifestyle that moves people closer to Jesus at the place where he showed more of his humanity. This lifestyle is inspired by St. Francis, particularly when he said: “I would like to walk the roads of the world mourning the Passion of my Lord.”

In addition to the Franciscan brotherhood and Br. Diego, the hermitage is also supported by the service of Teresa Penta, who is in charge of welcoming the hermits and managing the rooms and the garden. Teresa, a secular Marian from Puglia, Italy, who has lived in Jerusalem for four years, made her solemn profession on October 7 last year. Dressed in white and in the presence of parents, friends and religious, she asked to “follow Jesus Christ, the Lord, through Mary as a secular consecrated woman through the perpetual profession in the Marian Community—Oasis of Peace.” After being prostrate on the ground for the litanies, she knelt in front of the Superior, Mother Maria Valentina of Jesus, in Gethsemane, and made her vows. Presiding over the ceremony was Giuseppe Lazzarotto, the Apostolic Nuncio in Israel and Apostolic Delegate to Jerusalem and Palestine.

As Teresa Penta recalled, Gethsemane is a place that attracts many pilgrims every year. Its attraction was the reason for her trip to the Holy Land, which then led her to commit herself to serving the hermitage, as a second calling, after that of the consecrated life, leaving everything to give herself entirely to the Lord. In the case of Teresa, following Jesus in Gethsemane meant leaving her job at her nursery school in Monopoli, Italy, as well as the activities that she was involved in at her parish, not to mention her nation and her family. For those who visit for short or long periods of time, [coming to the hermitage] means giving up the frenzy, the speed and the noise, so as to give way to a more important voice. Because, as Br. Diego said, “We have built [this place] on the rock, and it is to the rock that we must return.”

The perfect imitation of Christ

The Church of St. John the Baptist on the banks of the River Jordan returns to the Custody of the Holy Land