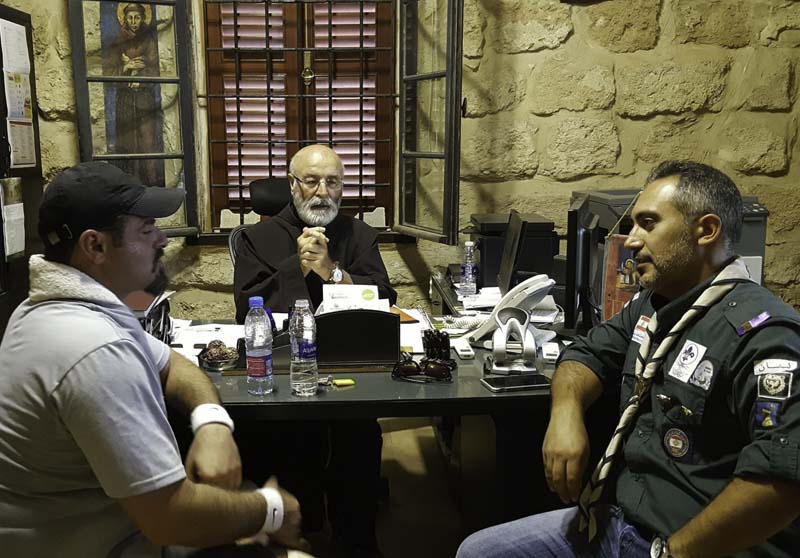 When 800 years ago the first Franciscan friars arrived in the Holy Land, after Acre and Antioch, they probably arrived in Tripoli. Tripoli, the second Lebanese city by population and importance, has a monastery of the Custody of the Holy Land that has only become active again in the last few months. Since 1976, there were no longer any stable friars present in the Lebanese city because of the war and various hardships. So, Franciscan superiors decided close the monastery. Some friars would take turns coming from Harissa and Beirut, although the Terra Santa School continued to exist before it shut down just two years ago. Since last December, however, the Franciscan presence in Tripoli has come back with more energy and enthusiasm than ever. Fr. Quirico is the new guardian, who officially began on January 1, 2017, while Fr. Pierre Richa is the new pastoral worker.

STARTING OVER FROM SCRATCH. “Upon our arrival, we found a disastrous situation,” said Fr. Quirico. “At first we had to take possession of the property, [and] we studied the maps.” Then came the maintenance and electrical work, repairs on the mechanical bell, renovations on the buildings and garden. Afterwards, came the spiritual element. “We began resuming Tuesday masses for the devotees of St. Anthony,” explained Fr. Quirico, “a tradition that had not been present for forty years in a regular manner, but that we have relaunched. We started have scout meetings, as well as other activities.” The friars of the Custody often work in contexts where few Christians and a few faithful of the Latin rite live, but, in the name of the Franciscan spirit that motivates them, their commitment is toward all locals.
“When I arrived I did not even have the wine to celebrate mass, so I had to really start over from scratch,” said the guardian of the Tripoli monastery.

ACTIVITIES OF TRIPOLI MONASTERY. Managing a guest house is one of the activities that has been relaunched since the monastery has been revived. “We welcome those who are passing by us, and we also have an eye on refugees and those who have little financial means,” said Fr. Quirico. “We are also repairing a room that will accommodate large groups of young people”
The Franciscan monastery in Tripoli has decided to focus a lot on another area: sports. The youth have the opportunity to meet for basketball, volleyball, football, judo and, this year, also dancing and bocce ball. Bocce ball was introduced by Fr. Quirico as a novelty and the occasion was the visit of the General Minister of the Order of Friars Minor, who came last April with the Custos of the Holy Land, Fr. Patton.
In addition, at the end of August, the Terra Santa Summer Camp ended, and it included the participation of about 50 children ranging from five to 12 years old. From July 5 to August 26, a dozen volunteers led the little ones in different games and activities, accompanying them once a week on trips to a different places. According to Fr. Quirico, “parents and children were very happy, and [they were also happy about] the final party.”

DIALOGUE AND FUTURE. Future projects include improving facilities and hospitality. Following in the footsteps of St. Francis, the development of clean energy in the monastery and the creation of Franciscan groups, such as the Third Order, the GIFRA (Franciscan Youth) and the Heraldry, are also in the works. Fr. Quirico also dreams of having a swimming pool to make the local kids happy, and to buy a pipe organ to host the Terra Sancta Organ Festival.
Among those who attend the monastery of the Franciscans, there are not many Latin rite Catholics. The local Christian community is composed of Greek Orthodox, Maronites, Greek Catholics, Syriac Orthodox, Syriac Catholics and Protestants. The total number should be around 25,000, but there is no official data. “I have tried to establish relationships with church representatives, and some helped me very much at first,” said the guardian of the Tripoli monastery. The majority of the local population are Muslims. Fr. Quirico knows the first needs that arise in these situations well: “Where many peoples and many religions live together, there is first a need for dialogue.” And that is exactly what he has been committed to from the beginning, knowing that for the people, their priest is sometimes an attraction and point of reference for everything.

Due to the arrival of many refugees, in recent years there has been a demographic explosion that has changed society and that has created many difficulties in Tripoli. In Lebanon, which is suffering from the effects of the surrounding and internal wars, the Franciscan friars are called to support the locals. “What can we do for Muslims? What can we do to build peace?” asked Fr. Quirico. I personally imagine peace not as something that is imposed from above but as a set of so many initiatives. Like a bare room where everyone arrives, picks up a tile and then begins to build the room. When the room is entirely covered, we will have peace.”