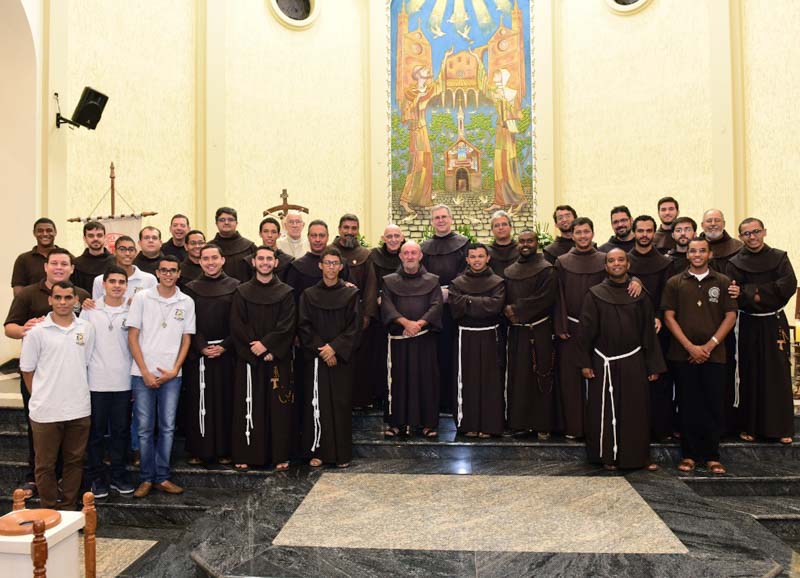 “It was a very positive experience because it was an experience of meeting with the local church.” This is how Fr. Francesco Patton commented on his visit to Brazil a few days ago. From January 23 to February 2, the Custos of the Holy Land went to Brazil for the first time and in the following days (from February 3 to 7), he went to Argentina for a canonical visit. These have been busy weeks with both official and informal appointments. Rio de Janeiro, Belo Horizonte, São Paulo, Brasilia, Recife and Buenos Aires are the cities that the Custos visited on his journey.
In Rio, he met the local bishops and held a conference at the cathedral, while in Belo Horizonte he inaugurated the new headquarters of the Commissariat. His most important meetings included one with the president and the secretary of the Bishops’ Conference, and with the Apostolic Nuncio and the commissioners. “It was an opportunity to express our gratitude,” said Fr. Patton.

Brazil is the nation with the largest number of Catholics and the Custos recalled this in his recounting of the visit.
“The importance of visiting the church in Brazil for the Custody of the Holy Land is primarily linked to the topic of pilgrimages,” he said. “In the last year, we have seen the number of pilgrims coming from Brazil triple: in 2016, there were about 9,000; in 2017, there were more than 30,000. Meeting people in various places, I saw their desire get to know the Holy Land better.” The importance of the trip is also connected to the theme of the Good Friday collection, so as to increase knowledge about the Holy Land, so that support for it may increase. “The number of friars from Brazil has also gone up in recent years,” continued Fr. Patton. “We have relationships with dioceses that send seminarians to have an experience here at the Custody and even groups of priests from Brazil in recent years have been coming to the Holy Land.”
The meeting with all of of the Brazilian commissioners, as well as with the Missionary Zelatrices, moved the Custos very much: “Some of these Zelatrices have been working for the Holy Land for 50 years and they do so, in the vast majority of cases, without ever having come [to the Holy Land]. Yet they have an extraordinary love for this land.” Speaking with the commissioners and spending time with them, Fr. Patton recognized the difficulty of their mission: “The activities of organizing pilgrimages and raising awareness for the Good Friday collection, are not easy. So, I have to say, it is a very, very important way of serving [the community].”

In Brazil, the Custos met one of the communities working for the Custody of the Holy Land, which is that of Cançao Nova. Also present there is the Shalom community, which he was not able to visit. “These collaborations are important for the life of the Custody, which does not think of itself as self-sufficient,” said Fr. Patton. “We are here at the service of the Church, and we are here with a mandate from the Church. As a result, all collaborations say that the Custody is an orchestra, where there are so many elements playing together and it is important that we all play the same score.”

Immediately after leaving Brazil, the Custos went to Argentina. “I went on a canonical visit, the official visit that every provincial minister makes to all of the friars of the province,” said Fr. Patton. “I wished to begin with the most distant fraternity, which is precisely the fraternity of Buenos Aires, to begin what I call a pilgrimage inside of the fraternities of the Custody. This journey will take me to visit all our communities.” In Argentina, Fr. Patton celebrated mass with the friars and met the Cardinal of Buenos Aires and the Minister of the Province of the Friars of the Assumption. In Buenos Aires, there are three friars currently, a Commissioner of the Holy Land and one of the 15 schools of the Holy Land of the Custody. “It is an important and significant reality even if it is geographically the farthest from the Custody,” concluded Patton. “This fraternity has been and continues to be a place of vocational welcoming for us and we could also say that it is a place that helps to promote the Franciscan vocation for the Custody of the Holy Land.