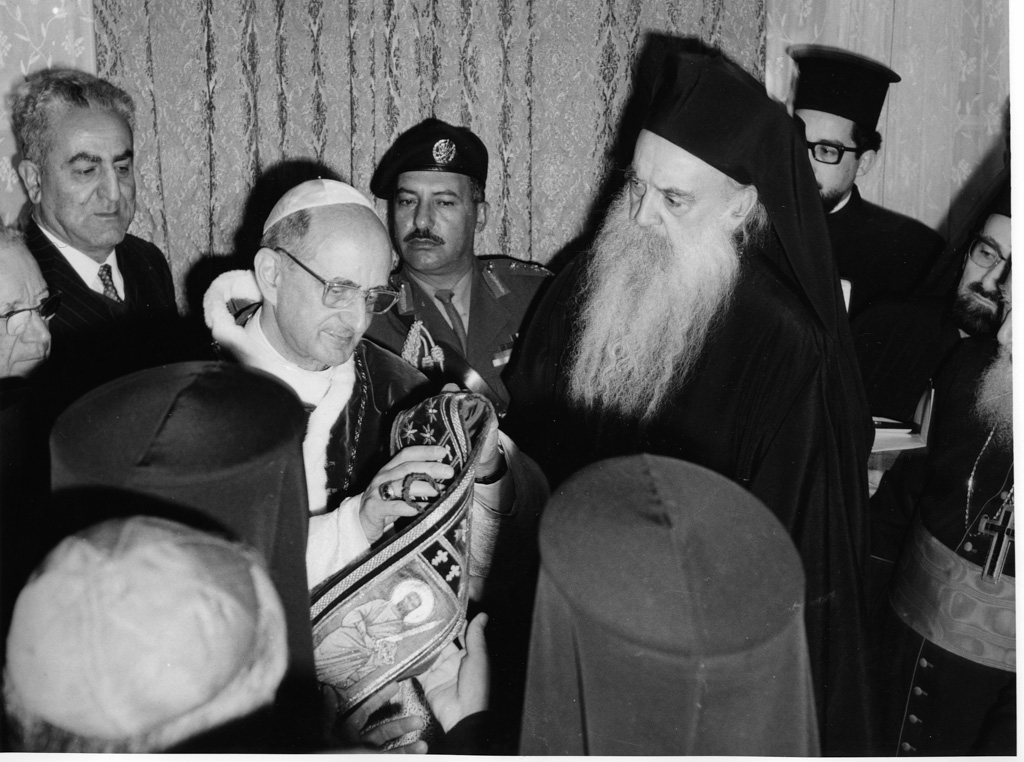 The choice to come in 2014 is no accident. Fifty years ago, on January 4th, the historic pilgrimage of Paul VI to the Holy Land began in Jordan. While the word “historic” has become a cliché in journalism, it is truly the best work to describe Paul VI’s visit here. The ease with which sovereign pontiffs travel today should not make us forget that Paul VI’s voyage was unprecedented. Prior to him, never had a pope voluntarily left Italy. And never since Saint Peter had a pope come to the Holy Land.

Giovanni Battista Montini, pope since the 21st of June 1963, announced his voyage on December 4th of the year, during his final address to the Second Vatican Council. “We are so profoundly convinced that we must intensify our prayers and our work for a good conclusion of the Council that We have decided, after mature reflection and numerous prayers, that We Ourself will go as a pilgrim in the land of Our Lord Jesus… in order to venerate personally the holy places where Christ was born, lived, died, and ascended into heaven after his resurrection—the principle mysteries of our salvation: the Incarnation and the Redemption. We will see the holy ground that Peter left and to which none of his successors have returned. We will return there, humbly and briefly, as a sign of prayer, penitence and renewal, to offer to Christ his church, to call to the one holy church the separated brethren, to beg for divine mercy in favor of peace among mankind… to plead with the Lord Christ for the salvation of all humanity.”

One month later, he landed in Jordan for three intense days of pilgrimage that took him from the site of Christ’s baptism at Bethany, through the sites of Christ’s passion (Via Dolorosa, Holy Sepulchre, Gethsemane), then to the Galilee (with stops in Nazareth, Cana, Tabgha, Capernaum, the Mount of Beatitudes, and Mount Tabor), returning to Jerusalem for a visit to the Cenacle and finally Bethlehem.

The meeting with Athenagoras, Patriarch of Constantinople, was one of the highlights of the pilgrimage. It took place at the patriarch’s initiative, who proposed it to the sovereign pontiff when he announced the pilgrimage. There were, in fact, two meetings. The first, on the evening of January fifth, took place at the offices of the Apostolic Delegation on the Mount of Olives, with a very small number of participants. The second, the next day, was at the residence of the Greek Orthodox Patriarch of Jerusalem on the Mount of Olives. The latter was well-covered by the media.

Seeing the pope board a plane on his way to the Holy Land was revolutionary. See him jostled about at each stage of the journey was a shock. Irene, a Custody volunteer, remembers that the televised images made her fear for the pope’s life. Father Lugans, director of the French Terre Sainte (Holy Land) magazine at the time, wrote: “There was talk of jostling, bustle, unimaginable disorder, assault, a turbulent crowd… I prefer to speak of a triumphal passage, the people’s joy, enthusiastic and unforced joy.”

A pope who insists on seeing “his people”, who are being kept to the side in Nazareth for “security reasons”; who visits a sick person at home, who stands the Custos up in order go and bless a paralyzed child who was calling for him, who leaves the cardinals of his entourage to their breakfast so he can get an early start for Capernaum… Watching Paul VI disarm his entourage with his audaciousness, we get impatient to welcome Pope Francis!

To relive Paul VI’s visit to the Holy Land, each of the Custody’s Holy Land magazines dedicated an issue to the event. The Italian edition (it), the November-December 2013 issue; the Spanish (es) and French (fr) issues, the January-February 2014 issue. Even at that time, these three magazines published numerous special issues, each in its own style.

The Christian Information Center at Jaffa Gate is preparing to commemorate this 50th anniversary of the pilgrimage with a special exhibition. The Custody’s site will be sure to keep you informed.