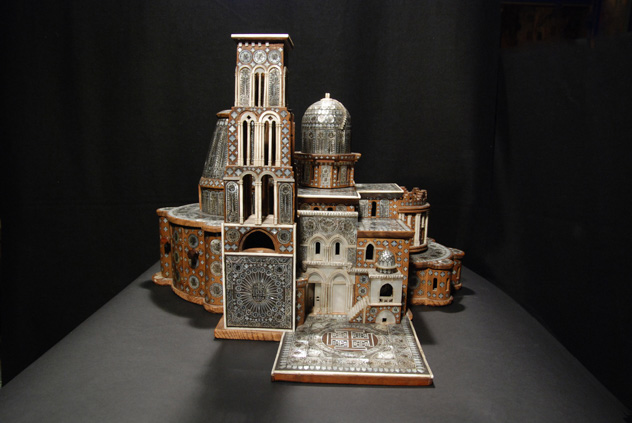 “From Jerusalem, Christianity has rapidly spread throughout the Middle East: Egypt, Syria, Lebanon, Jordan, Iraq. Throughout the course of history, Eastern Christians have played a major role in the political, cultural, religious and social development of some regions of the world.” From this reflection comes the new exhibit event at the Institut du monde arabe, or IMA (Institute of the Arab World) that will open on Monday, September 27, in Paris: “Chrétiens d'Orient. 2000 ans d'histoire.”
The exhibit will open in the presence of French President Emmanuel Macron and will end on January 14, 2018. It will be part of the events that will celebrate the 30th anniversary of the Institute du monde arabe at the end of 2017, which has always been focused on enriching and offering better knowledge of the Arab world in the West.

A UNIQUE EXHIBIT. The event lends itself to being “a unique exhibit,” wrote Jack Lang (director of the IMA). There are about 300 objects, in fact, and some of them are in Europe for the first time (precious manuscripts, icons, mosaics, or third-century frescoes from the domus ecclesiae of Doura Europos in Syria) and they come from the largest museums in the world (the Vatican Museums, the Louvre, the British Museum, etc.). They will highlight the thousand-year history of many of the Christian communities in the East: Coptics, Greeks, Assyrian-Chaldeans, Syriacs, Armenians and Maronites. “A plural history” that developed between the Mediterranean, the Euphrates, the Nile, the Bosphorus through the Roman, Byzantine, Muslim, Ottoman, and Arab era until the national movements. Among them are nine objects from the Terra Sancta Museum, such as the splendid model of the Holy Sepulcher made out of wood and mother-of-pearl, a funeral inscription, a mother of pearl Mater Dolorosa and a register from 1616. It will be an “immersion into the heart of the cultures that participate in the diversity of our contemporary world and that plunge into our history,” said Gérald Damain, mayor of the city of Tourcoing, who will host the same exhibit from February 17 to June 5, 2018, at the MUba Eugène Leroy.

THE EXHIBIT AND THE OBJECTS ON DISPLAY. The first part will feature the I-VI centuries and will focus on evangelization, the first Christian communities and their flourishing, the councils, the origins of the Eastern churches, monasticism and pilgrimages. Three beautiful sixth-century Byzantine capitals from the Terra Sancta Museum will highlight the beauty of Christian architecture, developed with the spread of ecclesiastical buildings starting in the age of Constantine.
The second begins in the VII century and goes all the way to the XIV century and will feature topics related to the Eastern churches after the Arab conquest, the various intellectual, artistic and cultural interactions, the development of the Arabic language in the liturgy, finally reaching the Crusader period and beyond. Among the pieces provided by the Custody of the Holy Land, there is a precious sixth-century figurative mosaic from Mount Nebo in Jordan (Khirbat al-Mukhayyat, St. George’s Church). This would represent the only Arabic pre-Islamic inscription known in Syria-Palestine in a “bi-salam” funeral formula combined with the name of the deceased archdeacon “Saola,” written in Greek on the right hand side.
The third part features the XV-XX centuries will delve into the idea of a unified Arab world under the Ottoman Empire and into the intricate relationship between the “sublime door,” the courts and the diplomats from Europe and the Eastern Churches (Catholic and Orthodox), aimed at the protection of the Holy Places. On this topic, the TSM will display two decrees. One is from 1397 by the Sultan Mammeluq al-Malik al-Zaher Barquq, which allowed the “Religious Franks” to reconstruct a part of the Holy Sepulcher that had fallen. Another decree from 1561, issued by the Suleiman the Magnificent, established the new residence of the Franciscans in the Georgian Monastery of St. Savior in Jerusalem after Mount Zion was abandoned. Some of the topics featured in this section include the splendid artistic renewal of icons starting in the XVII century from Aleppo to Beirut, Jerusalem, Damascus and Cairo.

MEMORY AND THE FUTURE. The last part, in the XX-XXI century, features works in light of the Arab revival, the fall of the Ottoman Empire, exile and immigration, focusing on the concept of the “memory”of a heritage that has been passed on to this day, even outside of the original geographic areas. A contemporary photographic exhibit with intimate scenes from the daily life of Christians from six Arab countries (Egypt, Jordan, Syria, Palestine, Iraq, Lebanon) will close the exhibit.
However, the exhibit is not only aimed at the preservation of a tangible and intangible cultural heritage, which is often forgotten or threatened by the new religious radicalism spreading in the Middle East, but it is also a reflection on the concept of diversity and multiculturalism, a very current theme in Europe. “This event emphasizes and enhances the, albeit small, Christian presence among the Arab world in the West,” said Br. Stéphane Milovitch, who heads up the Cultural Heritage Office of the Custody of the Holy Land. Faced with the phenomenon of immigration, we too often focus on Islam, but perhaps we should consider the contribution that many Christians in the East can make, with their thousand-year history and great cultural heritage for the building of a new Europe.