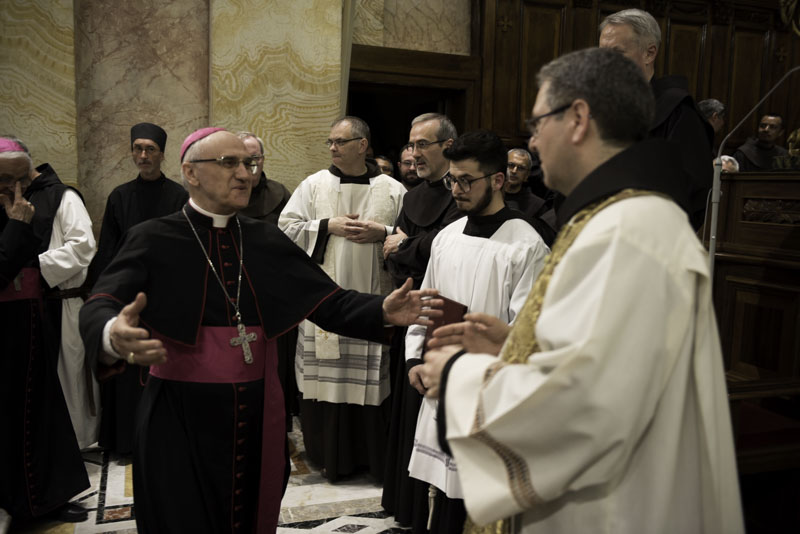 The Custody of the Holy Land is grateful to Mons. Giuseppe Lazzarotto for the work he has carried out in recent years. The Apostolic Nuncio to Israel and Cyprus and the Apostolic Delegate to Jerusalem and Palestine left the Holy Land on August 28, at the end of his term after having reached the maximum age limit. “Mons. Lazzarotto has always been very close to the Custody,” said Fr. Francesco Patton, the Custos of the Holy Land. Thanks to his interest, when he visited Jerusalem in 2014, Pope Francis attended a luncheon at the refectory of St. Savior's Monastery, along with the Franciscan friars of the Custody.

In a letter addressed to the bishops, the religious and all of the Christian communities of the Holy Land, Lazzarotto expressed his “great gratitude for the benevolence,” with which he was always treated in his ministry as the representative of the the Holy Father. “I have had the great privilege of spending the last five of my 46 years serving the Holy See's diplomatic service here,” wrote the Nuncio. “I keep in my heart the indelible memory of the many moments of joy and hope, but also of apprehension and concern, which in many ways I shared with you. Now, free from the worry of my many daily engagements, I can spend more time in reflection and prayer, in which the Holy Land and all of you will have a special place.”

Mons. Lazzarotto celebrated the end of his term with a mass in the Chapel of the Notre Dame Center in Jerusalem the day before his departure. Concelebrating with him were the Apostolic Administrator of the Latin Patriarchate, Pierbattista Pizzaballa, Mons. Giacinto Marcuzzo and Mons. Kamal Batish. There were other bishops, such as those representing the the Maronite and Syriac churches, along with male and female religious from all of the communities of the Holy Land. In his homily, he gratefully recalled the time that he served and lived in Jerusalem. He employed the image of a red carpet being rolled out, so as to recall the path that Jesus opens and rolls out every day in front of every person. He further emphasized that he will continue to keep the Holy Land and all of those who live and work there in his heart and prayers.

The story of the Milk Grotto told in an exhibition

Mons. Rodolfo Cetoloni and his commitment to the Holy Land