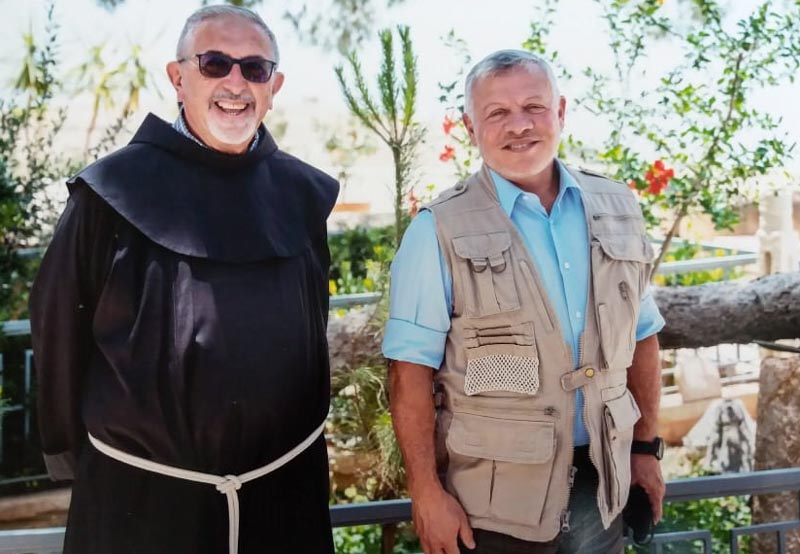 “People from all over Jordan and from the neighbouring countries would gather on Mount Nebo for the feast of St Moses and Holy Mass would be celebrated.” This is how Fr. Raffaele Caputo, superior of the Franciscan Mount Nebo convent describes what used to happen on the solemnity of 4th September, when the Church commemorates the figure of Moses, condottiere, prophet, leader and legislator of the Old Testament. Due to the arrival of the Covid-19 pandemic, however, this year will not be like the others: on the feast-day, a mass open only to the friars will be celebrated. The Franciscan friars of the Custody of the Holy Land continue to be present, looking after the place where according to tradition the prophet contemplated the Promised Land without being able to enter it. At present, however, they have had to close the Shrine to the public again, for the second time since the start of the pandemic, due to the sudden increase of infections in Jordan.

“Usually other Franciscan friars and the Custos of the Holy Land as well would arrive from Jerusalem on 4th September, as well as the parishioners of Madaba and some diplomats,” explains Fr. Raffaele. “Given the situation created by the Coronavirus, we have decided to celebrate on our own, the friars of the convent of Nebo and, probably, those from Amman.”

At present there are two religious who perform their service on Mount Nebo: Fr Raffaele Caputo, who arrived eight months ago, and Fr. Ammar Shahin, who has already lived here for four years.

A basilica, the restoration of which was finished in 2016, which contains the Memorial of Moses, today stands on the Mount, eight kilometres northwest of Madaba. In addition to the Franciscan convent, there is also a small museum with various archaeological findings and the famous panoramic spot from where, on clear days, it is even possible to see Jerusalem.

“Before, many pilgrims would come and we would be busy looking after them. A lot of them came, visited Mount Nebo, attended the mass and then left for the Holy Land, “says Fr. Raffaele. “Since the outbreak of the pandemic in March, we closed to the public until early July, when we also decided to reopen for the few people who came to visit the Place. But then last week we had to close again, seeing the increase in the number of cases in Jordan. We will be closed for two weeks to see how the situation evolves.”

Fr. Raffaele and Fr. Ammar, even during the closure, continued to look after the convent and the shrine on Mount Nebo. “Until July I also worked in the kitchen, in the absence of the cook, and running the house and caring for the plants. Luckily we have water tanks and thanks to God it has rained a lot this year and therefore we have plenty of water,” continues the superior of the Mount Nebo convent. “I celebrate Mass every day and pray for all the dead who are buried here, like Fr. Michele Piccirillo, and like Fr. Firas Hijazin, who passed away only recently. I also often go to the shrine, to commemorate St Moses and all the prophets.”

Last June, an unexpected event took place on Mount Nebo:  the king of Jordan,  Abdallah II,  wanted to hold a meeting there with the leads of the tourism sector, to discuss the new start after the pandemic. “They also chose Mount Nebo because most of the tourists are Christians and they want to encourage them to come to Jordan,” explains Fr. Raffaele. “There was the king, his son and about fifteen of the heads of the tourism police. I was able to speak to King Abdallah II and he is really a very affable and human person. Moreover, the Royal Household has always supported the work of the friars, aware of the fact that the Franciscans have brought Jordan into a sphere of international tourism, thanks to the work of many friars, including Fr. Michele Piccirillo”.

The friars of the Custody of the Holy Land in Jordan have also been greatly engaged for some time in the educational sector. The Holy Land School in Amman is one of the country’s excellences. “Now that the schools have been opened, the friars in Amman are also very busy. I pray every day for Father Rachid, the head of the school, so that God  may protect him in these difficult times,” says Fr. Raffaele Caputo.

On the Eve of the feast of St Moses, the condottiere chosen by the Lord and a figure of great charisma, Fr. Raffaele recalls the importance of the Holy Prophet: “Moses led the Jewish people out of Egypt to the Promised Land and the Lord spoke to him. Moses is still venerated today by Jews, Muslims and Christians and links us all together in one human family. This is why Mount Nebo is a centre for peace.”

The Terra Sancta college in Amman: the school that “has left nobody behind”