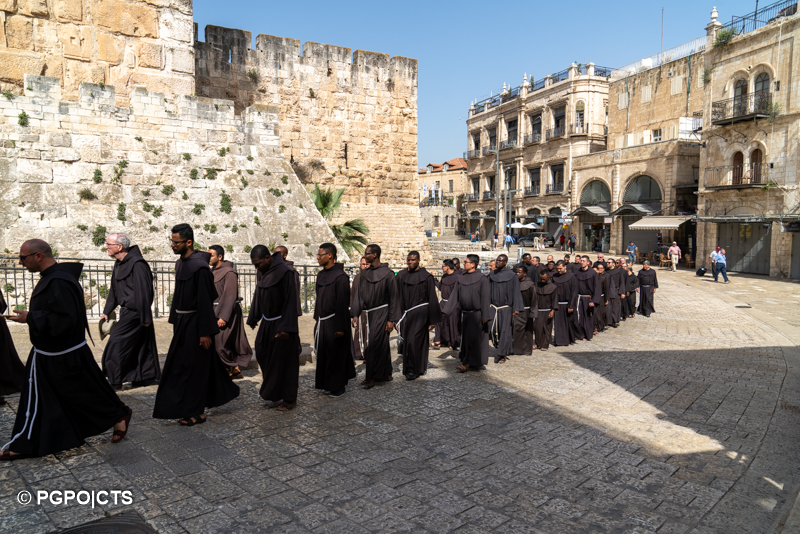 On Wednesday 27 April, a delegation of friars from the Custody of the Holy Land, led by the Custos, Fr. Francesco Patton, visited  the representatives of the Orthodox Churches in Jerusalem to extend their Easter greetings. Compared to the Catholics who follow the Gregorian calendar, the Orthodox celebrate Easter one week later, in concordance with the Julian calendar.

The morning was divided into five appointments, each at a different Orthodox Patriarchate: Greek, Armenian, Syriac, Coptic and Ethiopian.

The first to welcome the Franciscans was His Beatitude Theophilus III, the Greek Orthodox Patriarch of Jerusalem. The Custos pronounced the ritual Easter greetings to the Greek bishop and thanked his hosts for their fraternal cooperation in the Holy Land and in Jerusalem; he then expressed gratitude for their common commitment to ensuring the rights of the Christian community  and fostering the return of pilgrims. On his part, His Beatitude said he was delighted to receive the visit and the greetings of the Custos and, as part of the discourse on Easter, he recalled how differences and obscurity have always been defeated by the glorious light of Christ. He then thanked the Franciscans for the close cooperation that has been reached not only in reference to the historical sharedrestoration of the floor in the Holy Sepulchre, but also in many other circumstances in which the Custody has collaborated loyally, showing that it belongs to the “same Christian family and to the same faith.”

The Franciscan delegation then went to the Armenian Patriarchate, where they were received by the Armenian-Orthodox Patriarchate of Jerusalem, His Excellence Nouran Manoughian. The Custos extended his greetings and quoted a passage from the homily of the Holy Father pronounced on Holy Saturday: “Our hope has a name: the name of Jesus. He entered the tomb of our sin; he descended to those depths where we feel most lost; he wove his way through the tangles of our fears, bore the weight of our burdens and from the dark abyss of death, restored us to life and turned our mourning into joy. Let us celebrate Easter with Christ!”Bishop Manoughian welcomed the words of the Father Custos with joy, taking the opportunity to extend an invitation to pray, in this time of Easter, so that all the conflicts in the world can be settled, in particular the local one in the Holy Land and the recent one involving Russia and Ukraine.

The friars then went to the nearby Syriac Patriarchate where the bishop Antimous Jack was waiting to receive them. After having presented his greetings to all those present, the Custos then dwelled on the intention  continue to pray for the Syrian Christians who are victims of violence all over the world, taking advantage of Easter which is “a gift of peace and reconciliation.”

In reply, the Syrian bishop said he was joyful to receive this visit, showing how together we all form a single Christian family, as we are all children of God by virtue of the choice of accepting him. In this regard, he quoted the eleventh verse of the prologue of the Gospel according to John: "To those who did accept him, he gave power to become children of God: to those who believe in his name."

This was followed by the visit to the Coptic Patriarchate, adjacent to the Holy Sepulchre, where the Coptic bishop Antonious was waiting for the friars. The Custos invoked the breath over the Middle East, the Holy Land and the whole world of the Easter gift of the Holy Spirit, so that it “brings the gift of peace and reconciliation as on the evening of the first Easter.”He then hoped for the return to the Holy Land and to the Holy Sepulchre of the Egyptian pilgrims, so that they “can return to their communities strengthened by the encounter with Jesus Risen  and so also capable of offering their testimony of Christian faith in a situation which is very often difficult and hostile.”

The Coptic bishop, replying how the resurrection of Christ celebrated at Easter also recalls, in the relationship between the Old and the New Testament, the blood shed for the call to salvation: "We thank Jesus Christ who shed his blood for our salvation. Jesus, by giving his life for us, gave us eternal life. Let us pray so that this action of grace gives us the strength to relieve sorrows and become a single church.”

At the end of the morning of visits, the Franciscan delegation went to the Ethiopian Orthodox Patriarchate, where the friars were received by the bishop Embaqom. The Custos greeted him, quoting the episode of the gospel according to John which narrates the apparition of Jesus to the disciples locked up in the cenacle: "Jesus came and stood in their midst and said “Peace be with you" (John. 20, 19). And continuing: "When we celebrate the resurrection, we know that a new world and a new humanity are possible, on condition we accept the precious gift of the Holy Spirit." The Ethiopian bishop cordially welcomed the Easter greetings of the Custos and the visit of the Franciscans, invoking the peace of God on the world and exhorting those present to pray for them. 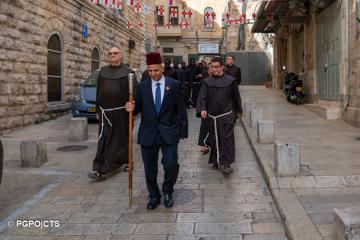 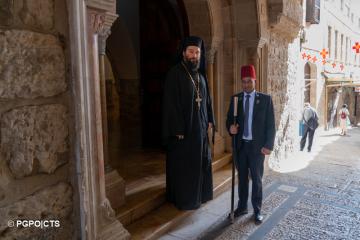 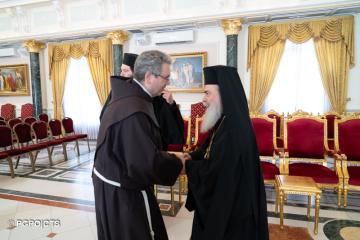 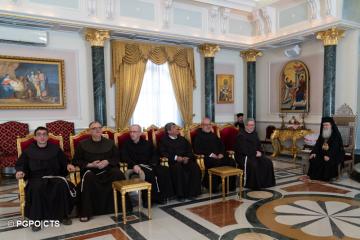 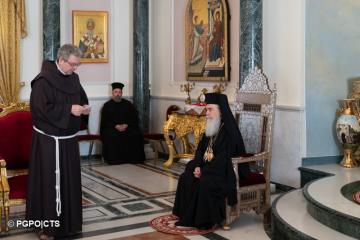 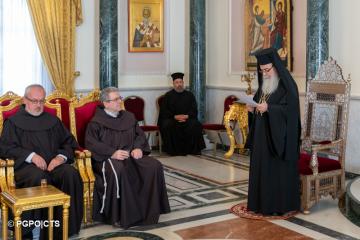 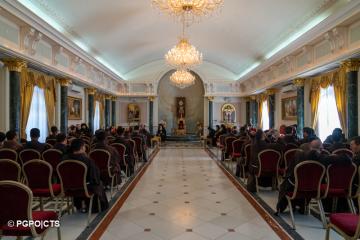 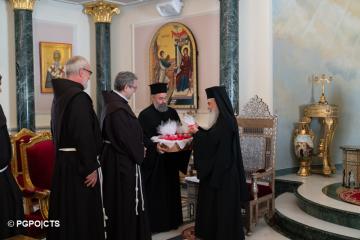 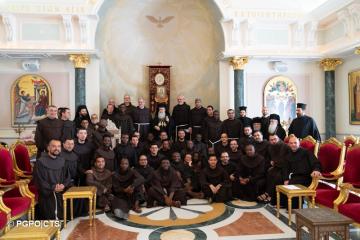 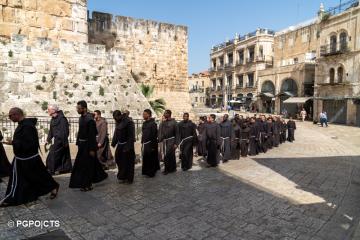 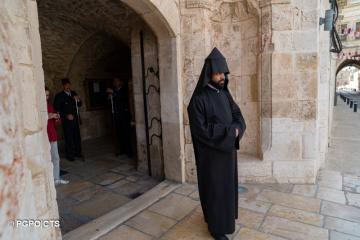 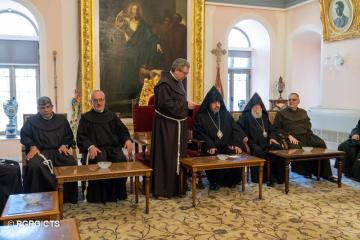 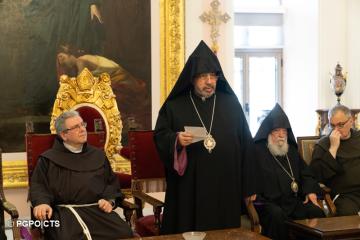 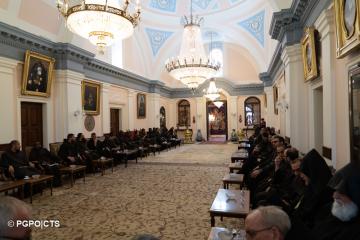 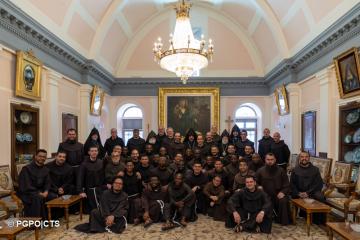 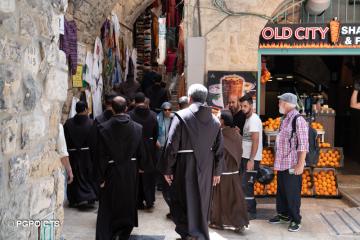 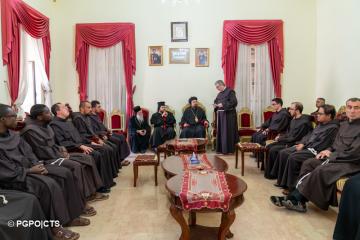 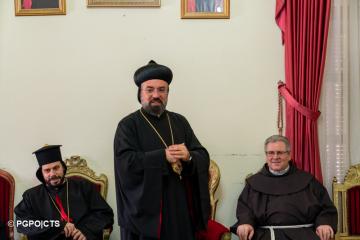 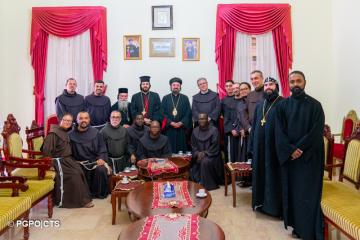 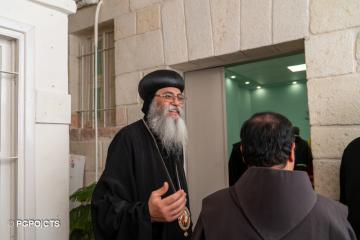 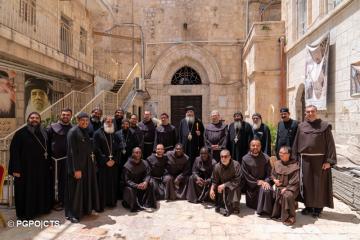 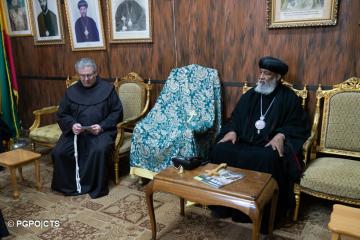 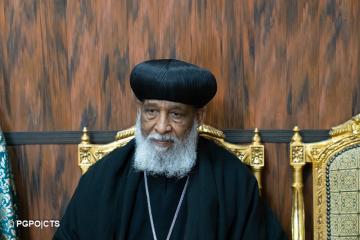 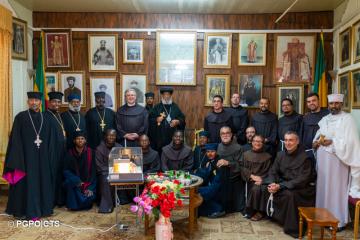