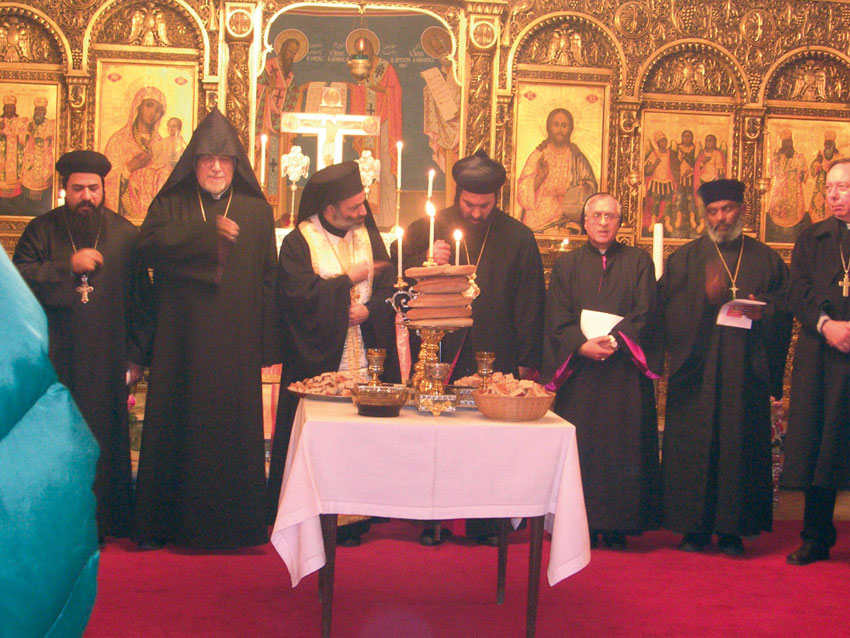 “Shame on us if we have to see each other again next year!” Father Mtanios, vicar patriarchal of the (Greek Catholic) Melchite Church, pronounced these words without hesitation concluding, in his church, the week of prayers for Christian unity held between the 22 and 29 January in Jerusalem. In the eyes of both the Western World and the pilgrims who visit it, the Holy Land is the place in which the divisions among the Churches are most evident and saddest.

On the other hand, seen from the inside and above all during this week of prayers, the Holy Land is the place wherein unity is strongest. No other place on earth offers a similar opportunity of meeting so many Christian denominations, each with their own specificity, and joining them in prayer. The Christians of Jerusalem were able to go to a different Church every day of the week.

Admittedly, the Greek Orthodox did not participate fully. Nevertheless, for the second year running, this Church afforded the opportunity to inaugurate the week with the compline prayed on Calvary. Also a Greek Orthodox priest, Father Alexander, was present at all the celebrations. Instead, the Anglicans, Armenians, Lutherans, Latins, Copts, Ethiopians and Greek Catholics threw wide open their doors and hearts to the multicoloured Christian community of Jerusalem, made up of local Christians and Christians from all over the globe.

The latter live, pray and work in Jerusalem and come here to learn about unity lived in practice. In fact the Arab-Christians of the city, as those in the remainder of the country, have learnt to live together over the centuries and certainly did not need this week to meet each other. It is second nature to them to move from one church to another. The diverce facets of the universal Church are reflected in their own families. And all is done without denying one’s own identity: one is what he is (and proud of it): Latin, Greek, Copt, Anglican but the other is a friend, a brother both in the real and figurative sense.
No doubt that the theology, the dogmas and some traditions do find us in contrast with each other. “After all what is it that seperates from the Greeks?” “The filioque.” “Ah, Yes!” …Silence … “What does the filioque change?” … It is too difficult; it would be better to go for a fraternal cup of coffee offered at the end of each celebration.

One must see them all together, discussing and laughing jokingly … who is what? The exchanges serve mostly to get to know each other, “What do you do?” As regards spiritual affinity, “We have a common sacremental life.” Regarding linguistic groupings … how many languages were used in prayer durng this week? Arabic, Hebrew, Armenian, Syriac, Greek as well as English, German, French, Italian, Danish, Swedish, Finnish … “Each one was heard praying in his own language.” This is one of the features that identify Pentecost in the Acts of the Apostles. In fact the week of Prayer for Christian Unity in Jerusalem is a life bringing breath of Pentecost for both spirits and hearts.

One of the most intense moments of the week has doubtlessly been the one held at the Cenacle: where Pentecost took place and the Church was born. The holy place, ‘neutered’ because none of the churches can celebrate in it on a daily basis, brought everyone together in the spirit of a One Undivided Church. Here, during a moving and solemn liturgy, the Abbot of Abu Gosh forcefully affirimed: “There is no unfaithfulness in listening to the other.” And during this week, there was never a question of denying oneself, one’s historical, cultural and spiritual identity; rather it was a question of respecting each other, journeying together, with our differences of course, but striving together to love our brothers and humanity, working to get them to know and love Christ. “Shame on us if we have to see each other again next year!” “But Father if we did come together again, and the Greek Orthodox did join us, as was hinted by Father Alexander” “Then I would very gladly give up our place so as to have the closing celebration held at their Catholicon rather than here”. “Shame on us if we have to see each other again next year!” But if there will be a year in the future in which the Greek Orthodox will be present then we will really have a great feast!