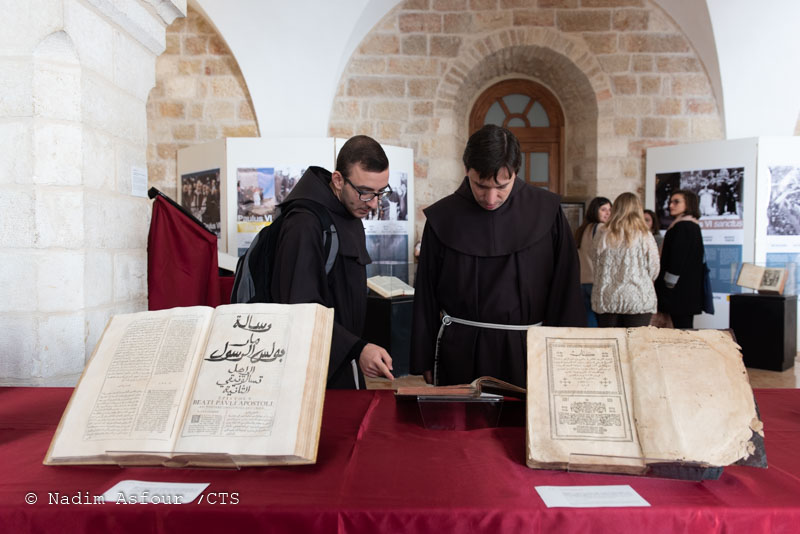 Nearly 40 editions of the Bible coming from the General Library of the Custody of the Holy Land are currently on display in the Foyer of the Custodial Curia in Jerusalem. The exhibition is entitled “The Bible on the move” and can be visited from November 6-8.

There are several pieces currently on display, including two of particular interest: the first Italian translation of the Bible, in an illustrated 1493 re-edition, of which there are only ten copies in the world. The other is the Gospel in Arabic with the front text in Latin, printed in Rome in 1591, for the Eastern churches is a clear sign of cultural openness toward the East.

As stated by Prof. Edoardo Barbieri, a professor at the Catholic University and the scientific director of the project, “the Bible is a book that always presents itself in different ways and that is transformed.” Scrolls, ancient printed books and manuscripts, the exhibition is a true journey to discover how the Bible is the opposite of a fixed text, but a “moving” text focused on the friendship between God and man.

For the sixth consecutive year, the Library of the Custody of the Holy Land, in collaboration with the European Research Center, the Book Publishing Library of the Catholic University of the Sacred Heart of Milan and the Pro Terra Sancta Association, present an exhibition on the rich heritage of the ancient book preserved in the Library. The Custodial Vicar, Br. Dobromir Jasztal, during the opening held on the morning of November 6, highlighted how this initiative has two reasons for being: on the one hand, it increases appreciation of the ancient, rich heritage of the Custody, and on the other hand, it has an objective of using culture as a terrain for dialogue, meeting and sharing with those who are from different background. This exhibition is a unique opportunity to meet different faiths and stories gathered around the Holy Scriptures of both Jews and Christians, a way of coming together and exchanging ideas.

Br. Lionel Goh, head of the General Library of the Custody, thanked all of the associations that collaborated in making the organization of an ever-new exhibition possible for the sixth year in a row. In particular, Br. Lionel stressed the support of Prof. Barbieri’s collaboration, who personally takes care of accompanying his students every year for a volunteer experience within the Library, with particular attention to supporting the management of ancient works.

The exhibition was also an opportunity to formalize the partnership of the Custodial Library with the Press Museum of Montepulciano (Italy), founded by the lawyer Paolo Tiezzi, a collector of ancient books, who managed to launch a project that created a place to help and support promoting culture.


The cataloging work that was carried out by the students serving the Library can be found in the various catalogs available online at https://www.bibliothecaterraesanctae.org/