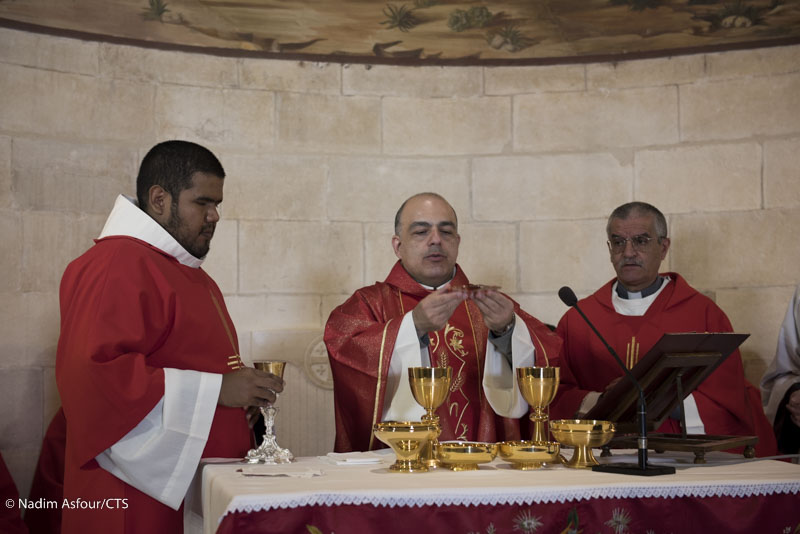 The fresco on the apse of the church in Bethphage depicts Jesus’ entry into Jerusalem. It is a small church on the Mount of Olives that is filled with faithful every year the day before Palm Sunday so as to commemorate that event. Fr. Ramsi Sidawi, the bursar of the Custody, presided over the mass on April 8, along with other Franciscan friars of the Custody.

Fr. Matteo Munari of the Studium Biblicum Franciscanum said in his homily that Bethphage, from the Aramaic Betfaghè, means ‘the home of unripe fruit.’ “It means that in this place there is a prophecy about the bitterness with which Jerusalem welcomed Jesus.” The inhabitants of Jerusalem and the Pharisees, in fact, refused to welcome him. “Besides them, however, there was also a joyful crowd that accompanied and welcomed Jesus,” said the friar. “The crowd had so much hope in him; it is not the same [crowd] that a few days later shouted “Crucify him.” Those who accepted Jesus were disciples and pilgrims who followed him from Galilee, who listened to Jesus’ ministry.” There was talk of the blind and the crippled being healed and of sinners being forgiven.

“Let us prepare to live out Holy Week, trying to put aside the bitterness that is part of our lives, that may lead us to reject Jesus, because it makes us uncomfortable and it requires us to change our lives,” Fr. Matteo Munari concluded in his homily. “We want to praise Jesus, saying, Oshana, Lord save us.”

Huda and Rasha live near the Bethpage sanctuary and each year they are present at the masses on Saturday and for the Palm Sunday procession. “There are sixty-nine Catholic families here,” said Rasha. The two sisters explained that every year many faithful flock to Bethphage to retrace Jesus’ entry, when he was acclaimed as Savior by his disciples. “For this place, the Saturday before Palm Sunday and Palm Sunday are the most important time of the year.”

The guardian of Bethphage, Fr. Aquilino Castillo Alvarez, who is also the vocations director for the Custody, greeted everyone with a smile and invited them to eat falafel, hummus and pita in a hall of the monastery: “You are all welcome tomorrow for the procession of the Palms.”