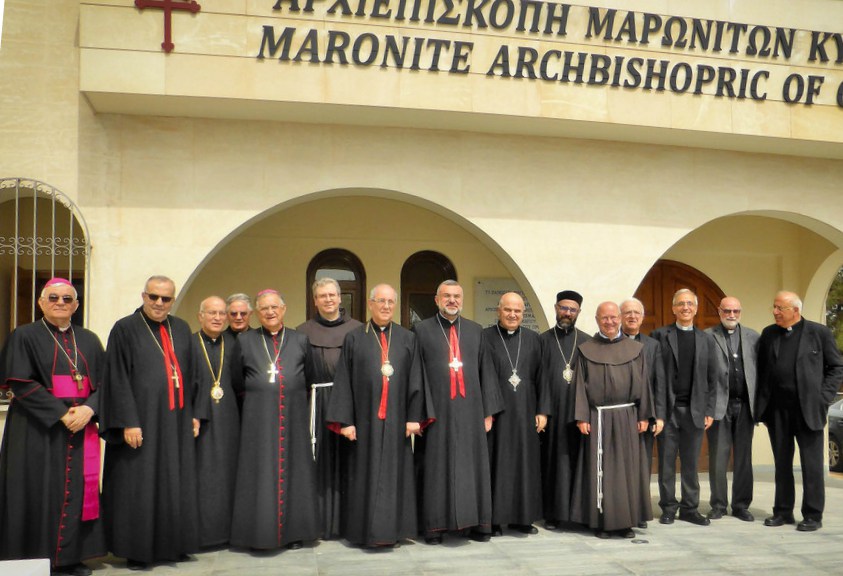 CYPRUS – The Assembly of Catholic Ordinaries of the Holy Land (AOCTS) met on April 11-12, 2018, for its plenary meeting that took place at the Maronite Archbishopric in Nicosia, Cyprus.
Throughout the meeting, the Assembly addressed several topics of the Synodal meeting of Bishops and Youth, migrants, the Pope’s encyclical “Laudato Si”, and pilgrimage to the Holy Land.
The Assembly also discussed the document of the pre-Synodal meeting that was held in Rome.

Fr. Jerzy Kraj presented the Apostolic Exhortation “Gaudete et Exsultate” and highlighted its strengths.
As for the Holy Land pilgrimage, Fr. Custos Francesco Patton reflected on the numbers of the pilgrims in the last two years.
For the migrants, Fr. Rafic Nahra, Coordinator of the pastoral care of migrants in Israel, demonstrated the social and pastoral situation of migrants in Israel and the bishops spoke about the migrants situation in Jordan, Palestine and Cyprus.
Meetings and Masses were held with every parish priest, religious men and women in Nicosia, Cyprus. The bishops visited several historical places and churches.

Please find below the full statement of the Assembly Catholic Ordinary of the Holy Land:

The Assembly of Catholic Ordinaries of the Holy Land met on April 11-12, 2018 for its plenary meeting. The meeting took place at the Maronite Archbishopric in Nicosia, Cyprus. The gathering of the members of the assembly was organized jointly by the Maronite Archbishop of Cyprus Msgr. Youssef Soueif and by the Patriarchal Vicar in Cyprus Father George Kraj.

The Assembly addressed the following topics:

1- The Bishops, referring to the issue of Syrian and Iraqi refugees, noted their dramatic situation and their desire to leave the Middle East for other countries to find more security and dignity. They recalled the vocation and mission of all Christians, especially those of the Holy Land, to remain in their land despite the current challenges.

3- Migrants: Father Rafic Nahra, coordinator of the pastoral care of migrants in Israel announced that there will soon be a personal parish for migrants and that the current structure will be promoted to become a vicariate for migrants from May 20 next. The assembly wanted to urge the faithful of the Holy Land to welcome and integrate more migrants into their parishes.

4- Father George Kraj, explaining chapter 8 of the apostolic exhortation “Amoris Laetitia” spoke of the case of couples in difficulty who seek reconciliation and communion.

5- Laudato Si: Father Custos Francesco Patton presented the encyclical “Laudato Si” of Pope Francis, dedicated to the environment, which reflects on “our common home”. The Holy Father values ​​the theme of ecological conversion and reflection on the lifestyles of humanity.

6- Pilgrimage to the Holy Land: Father Patton announced that the number of pilgrims to shrines has increased in 2017 compared to 2016, and that the 2018 forecast is even more positive, as the number could triple. Official statistics speak of three and a half million visitors to the Holy Land, among whom more than half are Christian pilgrims. The Assembly encourages these pilgrims to meet with the local Christian communities.

8- The members of A.O.C.H.L. visited the Archbishop of the Church of Cyprus. Having met the union of consecrated persons of Cyprus, they also visited with local Christian and Muslim religious leaders.

From the website of the Latin Patriarchate of Jerusalem