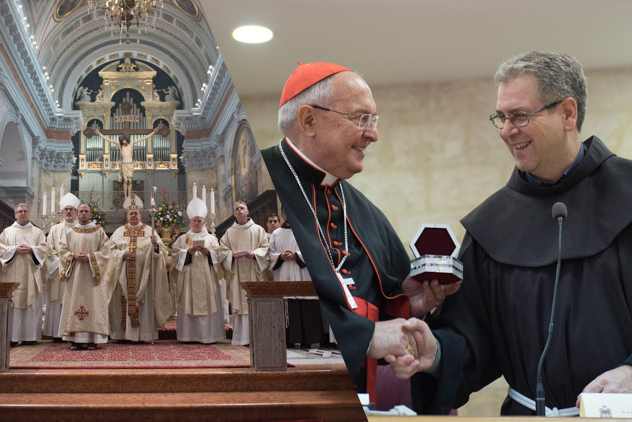 The second day of celebrations began early in the morning in a crowded, festive church. The Church of St. Savior in Jerusalem continues to celebrate the 800 years of Franciscan presence in the Holy Land until October 18. Cardinal Leonardo Sandri, Prefect for the Congregation of Eastern Churches, was also present for the important event. On October 17, he celebrated the mass, during which he read his homily and brought a personal message from Pope Francis: “I encourage you to continue to be happy in your support of our friars, especially the poorest and the weakest, in the education of our youth, in the welcoming of the elderly and in the care of the sick, concretely living out the works of mercy on a daily basis.” The message written by Pope Francis was read by the Holy See’s Attaché for [Foreign] Affairs, Mons. Marco Formica. (READ THE COMPLETE TEXT OF POPE FRANCIS’ MESSAGE TO THE CUSTODY OF THE HOLY LAND).

In his homily, Cardinal Sandri spoke about the mission of the Custody of the Holy Land. “Your way of becoming the guardians of the holy places has reiterated the same dynamics of St. Francis’ first call,” said the Cardinal. “The Lord’s invitation was addressed to him: ‘Go, rebuild my church.’” Like the founding Father of the Order, the friars of the Custody understood that this was not an invitation only to material, but also spiritual reconstruction. “So you too, who have been present in the Holy Land for 800 years, have helped take care of the shrines, and you have been a witness to of evangelical life, building the holy temple of the living God,” said Cardinal Sandri.

Everyone then moved to the Hall of Immaculate [Mary], where the Prefect for the Congregation of the Eastern Churches held the conference entitled: “Always preach the Gospel and if necessary, use words! The Franciscan presence in the Holy Land and the Middle East "(READ THE COMPLETE TEXT FROM THE SPEECH BY CARDINAL SANDRI).
In the afternoon, Cardinal Sandri also visited the offices of the ATS Pro Terra Sancta Association, the NGO that supports the Custody’s social and cultural projects.

The second day of celebrations was rich with several other conferences. Prof. Filippo Sedda talked about the first Provincial Father of the Holy Land, Fr. Elia da Cortona, and in the afternoon Prof. Giuseppe Ligato talked about Acre at the time of the first friars’ arrival in 1217.
The second day was closed by Prof. Emmanuelle Main, who explained her precious work of cataloging and identifying the photographic documents about Syria (READ THE ARTICLE ABOUT THIS PROJECT: In Jerusalem, ancient and threatened Syrian heritage takes on new life) .

We have asked Cardinal Leonardo Sandri to comment on the 800 years of Franciscan presence in the Holy Land. Here is what he said.

As Prefect for the Congregation of Eastern Churches, what do you think is the significance of the Custody in the Middle East after its 800 years of presence?
We are in the Land of Jesus. Jesus was born, died and rose here, because the mission of the Church is to proclaim Christ. Throughout the centuries and history, there has been this hunger and thirst for Jesus, to see him, to touch him, to follow his footsteps. So, the mission of the Custody of the Holy Land is to help these places, where Jesus passed through, continue to live, so that they may be living stones that can speak and so that the community of the disciples of Christ may stay alive and active in the Holy Land. This is the mission of the Custody: to offer the whole world, by the mandate of the Popes, this treasure of Jesus here in the Holy Land. And all pilgrims who come here, who cry and who listen to the Gospel, are accompanied by these our friars of the Custody. It is an incomparable mission in the life of the Church, reconfirmed by Pope Francis in his letter today, as has been done for 800 years by his predecessors. That is why we are rejoicing today and we are joyfully experiencing this eighth centenary of the Franciscan presence of the friars of the Custody of the Holy Land.

What words of encouragement would you like to say to the Custody say about the challenges it will have to face in the future?
The words I have for the Custody are first of all of gratitude to all of the friars who have passed through the Custody, [who are] witnesses of Christ with their lives and with their blood. A word of encouragement for the future is for them to continue this mission as disciples of Christ living in brotherhood, who with their simple, poor, Franciscan life can be witnesses to the Gospel. This is the new cry of the Gospel that must resound through the lives of our friars of the Custody of the Holy Land.