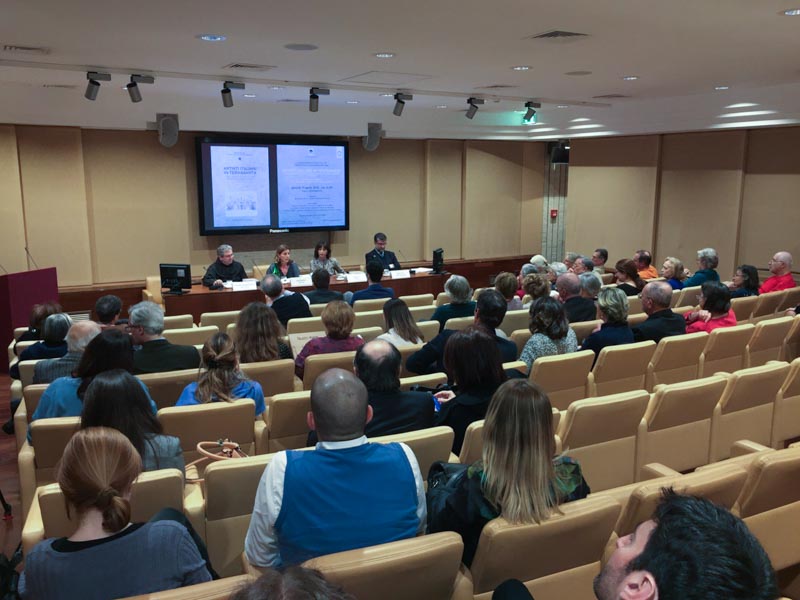 On April 19, the Vatican Museums were the backdrop for the presentation of the volume Italian Artists in the Holy Land. Painters, sculptors and artisans were working in the shrines of Antonio Barluzzi (1914-1955) created by Bruno Mantura, Anna Maria Damigella and Gian Maria Secco Suardo (Series of Studies and Documentation, Edizioni Musei Vaticani, 2017).
In the first half of the last century, many Italian artists brought their art and their professionalism to the Christian shrines in the Holy Land. This volume amply documents the work which–under the skillful direction of the engineer Antonio Barluzzi–became a witness of the fervent desire for cultural and religious renewal.

Long and complex archival research enabled this entirely Italian endeavour to be carried out, often by recovering unpublished materials that were once considered lost.
Against the backdrop of Barluzzi’s direction and exploring the creative uniqueness of each artist (including Mario Barberis, Luigi Trifoglio, Giulio Aristide Sartorio, Biagio Biagetti, Duilio Cambellotti and many others), the book analyzes the architecture, the paintings, the sculptures and the various decorations in places of worship, as well as restoration works: from the Basilica of the Transfiguration on Mount Tabor, to the Church of Agony to Gethsemane, and including the Shrine of the Flagellation in Jerusalem.
This is followed by the biographies of the artists and by some interesting insights: the study on the work of Antonio Barluzzi, historical events in Palestine during the Ottoman Empire up to the constitution of the State of Israel and, lastly, the biography of the eclectic engineer.

Barbara Jatta, director of the Vatican Museums, opened the series of speeches and highlighted the special charisma of Antonio Barluzzi, a Franciscan tertiary who was most tempted to take his vows: “Barluzzi was an extraordinary man, he was first a man of faith, and then an architect, who dedicated his life to the construction of many churches and to the restoration of the holy places. He managed to bring together many important artists by exporting the Italian artwork of the time, by artists whose reflections on the sacred were profound.”

The Custos of the Holy Land, Fr. Francesco Patton, recalled the timeline for the presentation of the volume: the conclusion of the commemoration of the eight centuries of Franciscan presence in the Holy Land and the impending anniversary, in 2019, of the eighth centenary of the arrival of St. Francis of Assisi in the Holy Land. “The relationship between the Custody and Barluzzi is part of a history of rediscovery, recovery and restitution of many sanctuaries by the Custody. This Catholic architect, a fervent Franciscan tertiary continually tempted by the cloister, was a professional of extraordinary efficiency and exceptional organization.”

Between 1912 and 1955, Barluzzi designed and restored 24 churches and hospitals. “I treasure the memory of the Basilica of Gethsemane, called the Church of All Nations because [its construction] brought together the nations that had fought [in World War I],” said the Custos, who then concluded, “Before Barluzzi, the designers were inspired by neo-gothic forms. Barluzzi decided not to repeat words that had already been pronounced. He was a true believer endowed with a religious spirit. Conforming all his life to an austere vision, he had the desire to translate his profound faith into a type of architecture capable of engaging the faithful.” This is why the new sanctuaries arose with a twofold meaning: to be an exact reference to the life of Christ, predisposing [the faithful] to open their hearts. The Basilica of Gethsemane is an environment that somehow helps people relive that night, while that of the Transfiguration is thought of as a source of light because Mount Tabor, which [this church] surmounts, is a luminous experience.
A speech by Matteo Lafranconi, director of the Quirinal Stables, was followed by the final lecture by Micol Forti, curator of the Contemporary Art Collection of the Vatican Museums, who recalled the deep connection between Barluzzi and the liturgical destination of his works. She focused on Barluzzi's relationship with the Holy Land, which was special and strong, with the current context.” “The relationship,” emphasized Dr. Forti, “is no longer between tradition and innovation, but comes out of the deep understanding of a message that those places protect.”