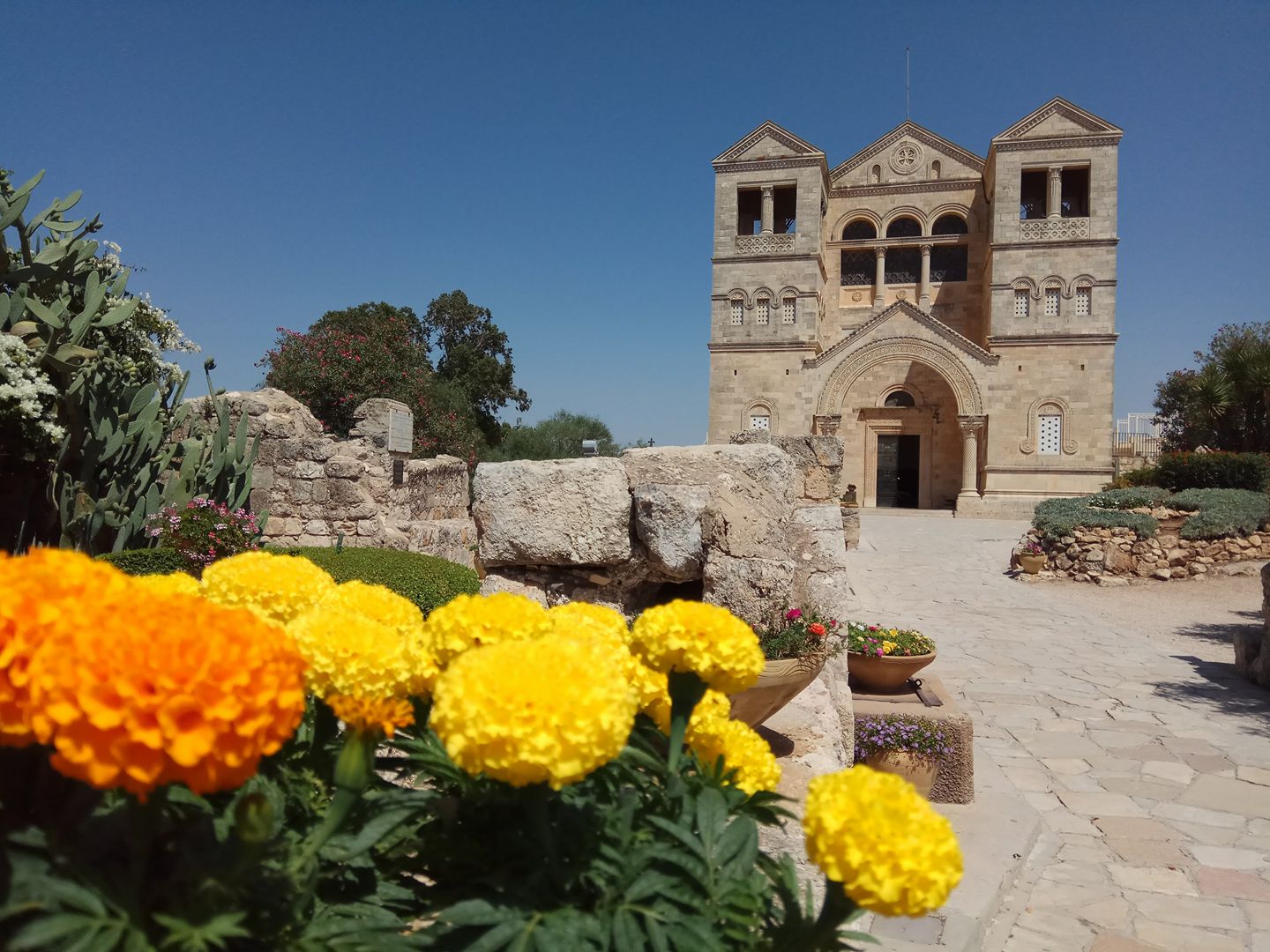 Mount Tabor, clearly distinguished from the other summits in Galilee, rises 450 meters above the plain and 588 meters above sea level. The mountain is located east of Nazareth, from which it is only eight  kilometers away as the crow flies, even if on the ground the distance is much greater. For Christian pilgrims it is the place where the episode of Christ’s transfiguration took place.

About eight days after he said this, he took Peter, John, and James and went up the mountain to pray. While he was praying his face changed in appearance and his clothing became dazzling white. And behold, two men were conversing with him, Moses and Elijah, who appeared in glory and spoke of his exodus that he was going to accomplish in Jerusalem. Peter and his companions had been overcome by sleep, but becoming fully awake, they saw his glory and the two men standing with him. As they were about to part from him, Peter said to Jesus, “Master, it is good that we are here; let us make three tents, one for you, one for Moses, and one for Elijah.” But he did not know what he was saying.
While he was still speaking, a cloud came and cast a shadow over them, and they became frightened when they entered the cloud. Then from the cloud came a voice that said, “This is my chosen Son; listen to him.” After the voice had spoken, Jesus was found alone. They fell silent and did not at that time tell anyone what they had seen.

None of the three Gospels gives a name to the Mount of the Transfiguration, for which various possibilities remain open. Somehow, Mark and Matthew seem to justify the identification with Mount Tabor when they say: “After six days Jesus took Peter, James, and John his brother, and led them up a high mountain by themselves” (Matthew 17:1; see Mark 9: 2). The Greek expression for “by themselves” can also mean “separately”, and would be justified by the fact that Tabor is isolated from the surrounding summits. Next, the “high mountain” would fit well with Tabor, which stands out among the heights of Galilee. Two evangelists (Matthew 17:1 and Mark 9:2) also specify that this happened “after six days” of the recognition of Jesus as Messiah and the prediction of the Passion in Caesarea Philippi: a chronological indication that actually corresponds to the distance between Caesarea and Tabor.

The first author to inform us of the tradition relating to Tabor is Cyril, the Bishop of Jerusalem, in the year 348. There was likely already a mention of it in a Commentary on the Psalms that is attributed by some (but not all) to Origen (who died in 253-4 in Cesarea Marittima). And it is true that the Gospel of the Jews, a Judeo-Christian work from the first half of the second century, also connected Jesus with Mount Tabor; however, upon closer inspection, the “high mountain” seems to refer to the scene of Jesus’ temptations. However, primarily in the Second Letter of Peter we get the impression that the Mount of the Transfiguration should be a well known place. In fact, he said: “We ourselves heard this voice come from heaven while we were with him on the holy mountain” (2 Peter 1:18).

Contrary to the Mount Tabor theory, it was believed by Eusebius of Caesarea (who died in the year 339) that Mount Hermon was the place of the Transfiguration. But this is even less than a half-truth. Eusebius in fact knew the verse from the Psalm very well: “Tabor and Hermon rejoice in your name” (Psalms 89:13) and therefore affirmed that the Transfiguration of Christ had taken place “on these mountains” (better to have too much than not enough). Then, as a third hypothesis, the episode took place on the nearby little hill of Hermon.

In the most ancient history of Israel, Mount Tabor held great religious and political importance. At the time of the Judges it was here that the prophetess Deborah urged the Jews to battle against the Canaanites, after which General Barak won a great victory over the armies of Jabin and Sisara in the plain of Jezreel (Judges 4-5).

In times of war, the mountain became a place of refuge for the inhabitants of the entire area. The hill was surrounded by a wall again in the time of Ttius Flavius Josephus in the war against the Romans, and then again in the Crusader era. Traces of these fortifications are still visible. For Christian pilgrims, however, what turned Mount Tabor into a symbolic place was Christ’s Transfiguration.

According to the pilgrim from Piacenza, around the year 570, there were three basilicas on Mount Tabor, which were parallel with the “three tents” mentioned in the Gospels. According to a document from Charlemagne’s era, there were four churches served by 18 monks. The Crusaders fortified Mount Tabor and enhanced it with luxurious furnishings, thus entrusting the mountain, in the year 1101, to the guardianship of the Benedictines. After the terrible defeat of the Christians at the Battle of Hattin, Mount Tabor remained in a state of neglect, especially since Saladin had already sacked it before. Then, Frederick II of Swabia made a peace treaty with the Sultan Al-Kamil (1229-1239), the monks returned to the mountain. However, not succeeding in carrying out a complete reconstruction since in 1263, indeed, the fierce sultan Baibars razed all of the churches on Mount Tabor to the ground. After that, very few pilgrims ventured as far as this sacred but isolated mountain. However, after 1620, when the Franciscans set foot in Nazareth, pilgrims began visiting Mount Tabor every year on August 6 for the feast of the Transfiguration, waiting for the right opportunity to resettle in this place. The opportunity came about with the benevolent Druze emir Fakhr ad-Din, who in 1631 allowed them to open a community on the mountain. Shortly thereafter the same concession was made for the Greek Orthodox community.

At the top of Mount Tabor one finds oneself at a crossroads. On the left, one can go to the Greek sanctuary. On the right, crossing the wind gate, one enters the property of the Franciscans, first encountering, on the left hand side, a small cemetery, and the nearby chapel of the Descendentibus. It is a simple building without glass windows built in Byzantine style and rebuilt in 1923. The name alludes to the descent of the apostles from Mount Tabor:

As they were coming down [descendentibus, in the Latin Vulgate] from the mountain, he charged them not to relate what they had seen to anyone, except when the Son of Man had risen from the dead. So they kept the matter to themselves, questioning what rising from the dead meant. Then they asked him, “Why do the scribes say that Elijah must come first?” He told them, “Elijah will indeed come first and restore all things, yet how is it written regarding the Son of Man that he must suffer greatly and be treated with contempt? But I tell you that Elijah has come and they did to him whatever they pleased, as it is written of him” (Mark 9:-9-13).

Archaeological excavations have been undertaken since the nineteenth century. In 1921-24, the Franciscans built the current basilica, in the Syro-Roman style: the first work of the architect Antonio Barluzzi, who would then work for another decade to help the friars. The area of the basilica includes the land that has been venerated since the Byzantine era. The two bell towers rise over the ancient oratories of Moses and Elias, and the two respective chapels remain dedicated to these two great biblical characters who appeared next to Jesus during the Transfiguration. The interior of the church is divided into three naves. From the side aisles, the steps lead to the raised high altar, which the mosaic of Christ’s Transfiguration overlooks. Another staircase, which is as wide as the central nave, descends into the open crypt, in which the ancient apse has been preserved. The mosaics in the crypt deepen the meaning of trans-figuration: Jesus took on various figures gradually through his birth on earth, the institution of the Eucharist, his sacrifice on the cross and his resurrection.

To the north, on the left hand side, lie the ruins of the medieval Benedictine monastery. One notices a chapel and, farther back, the Chapter hall and the refectory. The watchtower to the south, on the right hand side, of the church is the work of the Saracens, while the remains of the defense walls, farther down, date back to Roman times.

The view from the terraces
The terraces located on the sides of the basilica offer magnificent panoramic views. To the east, beyond the banks of the Jordan and Lake Gennesaret, one can see the Golan and Basan heights, as well as the Jordanian highlands of Gilead crossed by the Yarmouk Valley. To the south, the view extends over the mountains of Samaria and Mount Gelboe, which sticks out toward the north, and also over the smaller Mount Hermon, from whose northern slopes Nain can be seen. In the distance to the west, the elongated silhouette of Mount Carmel can be seen; in the foreground, the mountainous area of Lower Galilee with Nazareth, whose modern district of Nazaret Illit is mainly visible. To the north, there are the mountains of Upper Galilee with the city of Zefat and, on a clear day, one can even see the real Mount Hermon, which remains snow-covered until the beginning of summer.

In the open space in front of the sanctuary stands the Franciscan monastery, which was built in 1873-75, with attached Casa Nova, which is a hostel for pilgrims. Since 2006, the Mondo X community has provided a valuable service for pilgrims and maintenance of the vast complex. It is an Italian association made up of people with past drug dependencies, which was established in 1961, and which today includes around 40 communities located mainly on the [Italian] Peninsula. After undergoing therapy that aims to free them from from the constraints of physical dependency, Mondo X members work to build a drug-free life for themselves through a rigid daily schedule, which includes manual work and spiritual life.

The northern part of the mountain is taken up by the properties belonging to the Greek Orthodox community, which can only be accessed by pilgrims via the Orthodox Church. The church of St. Elias was built in 1911 on the foundations of a Crusader-era temple, but in any case it stands on originally Byzantine foundations, as shown by the mosaic floor. Toward the west, taking the path to the left of the wind gate, there is a grotto where medieval pilgrims honored the home of the famous Melchizedek, who blessed Abraham and in turn received tithes (Gen 14: 18-20). The grotto was restored in 2009, but is usually closed. 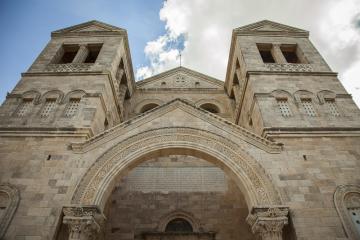 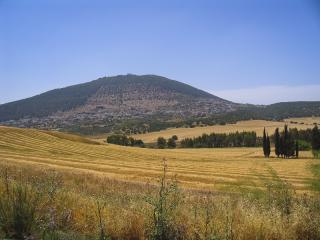 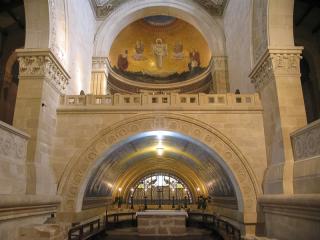 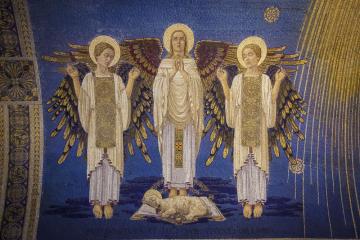 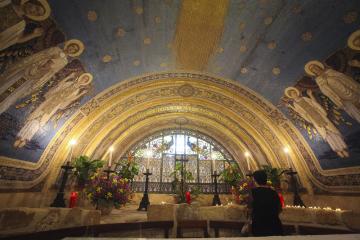 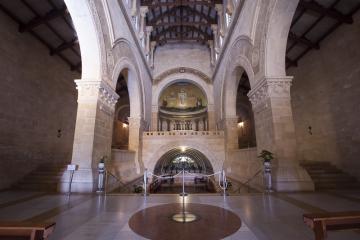 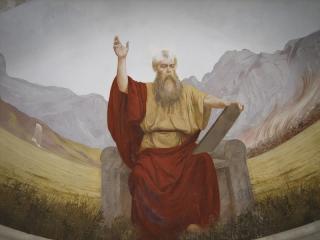 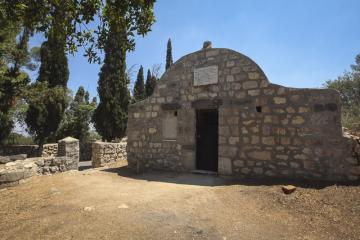 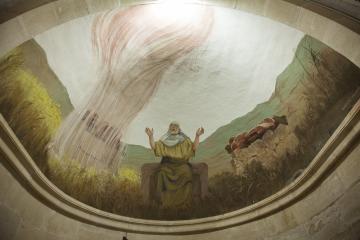 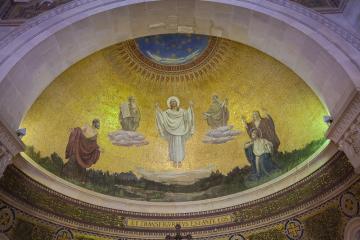 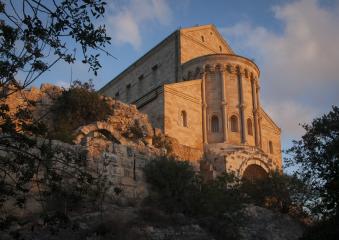 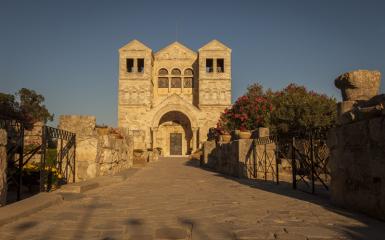