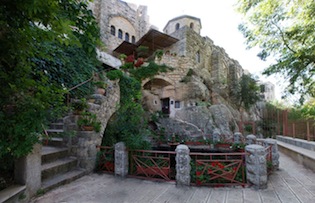 After the Sanctuaries of the Visitation and of the birthplace of St. John the Baptist, the hermitage of St. John in the Desert commemorates the place where the Precursor found refuge after fleeing from the Massacre of the Innocents. It includes the Sanctuary, the Grotto, the spring and the Tomb of Elizabeth.

The figure of St. John the Baptist is closely associated with the desert, a place of ascetic life and, in the light of the history of Israel, a place where the grace of God can be encountered. It is from the desert, according to the prophecy of Isaiah, that the Precursor of the Messiah was to have come.

‘Ain el-Habis, about 3 km from Ain Karem, commemorates the place where St. John the Baptist spent his childhood and the years preparing for public ministry. The written accounts that have come down to us – relatively late – maintain the historicity of this based on the name and on the ruins. ‘Ain el-Habis means “spring of the hermit”: a definition that indeed recalls the figure of the Precursor, the prototype of hermits.

The Crusaders built a church and a convent here, on what already existed. The first written account was by an Anonymous writer in the 12th century who left us a brief mention of the chapel in the Desert.
Jean Zuallart drew them in 1586 – already in ruins but nevertheless very impressive – and wrote: “Leaving the Visitation, we decide to continue for another two or three miles, to visit the Desert where St. John the Baptist, guided and comforted by the Holy Spirit, spent his childhood until the day of his manifestation to Israel, preaching the Baptism of Penitence. When we reached this Desert, following a very difficult and dangerous path, we were filled with joy at seeing a place that was both so austere and beautiful, although now there are not as many trees as apparently there were in the past and it is very rough and harsh and far from any human settlement. The cave where the Saint dwelled, celebrated in the hymn that is sung in church and which begins “Antra deserti…” is hollowed out in the rock in the middle and at the beginning of the slope of a mountain covered in shrubs, which immediately becomes a precipice, looking into the depths of the Valley opposite. This cave is very large inside and at the back has a raised part like an altar, where the Saint used to sleep.

Its entrance is very difficult and narrow, but once you are there, there is a spring of very good water, which can be drawn on from above and below. On top there is a small church and a small monastery, of which only some parts of the walls, which have almost all crumbled, can be seen”. (ELS 82).
In 1626, Father Quaresmi spoke of a church dedicated to St. John (ELS 86), which suggests that the Franciscans rebuilt or restored it.

The child grew and became strong in spirit, and he was in the desert until the day of his manifestation to Israel.
(Luke 1,80)

In the fifteenth year of the reign of Tiberius Caesar, when Pontius Pilate was governor of Judea, and Herod was tetrarch of Galilee, and his brother Philip tetrarch of the region of Ituraea and Trachonitis, and Lysanias was tetrarch of Abilene, during the high priesthood of Annas and Caiaphas, the word of God came to John the son of Zechariah in the desert.
He went throughout the whole region of the Jordan, proclaiming a baptism of repentance for the forgiveness of sins, as it is written in the book of the words of the prophet Isaiah:
"A voice of one crying out in the desert: ’Prepare the way of the Lord, make straight his paths. Every valley shall be filled and every mountain and hill shall be made low. The winding roads shall be made straight, and the rough ways made smooth, and all flesh shall see the salvation of God”
(Isaiah 40, 3-4) (Luke 3, 2-4)

The next day he saw Jesus coming toward him and said, "Behold, the Lamb of God, 21 who takes away the sin of the world. He is the one of whom I said, ’A man is coming after me who ranks ahead of me because he existed before me.’ I did not know him, but the reason why I came baptizing with water was that he might be made known to Israel."
(John 1, 29-30) 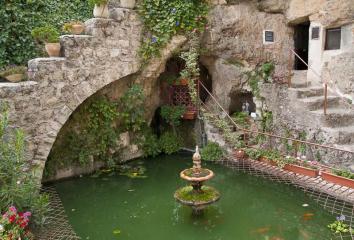 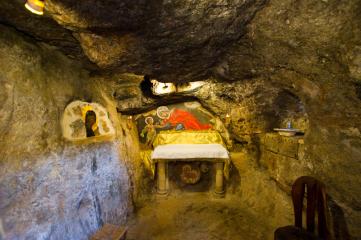 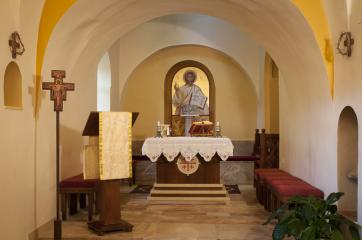 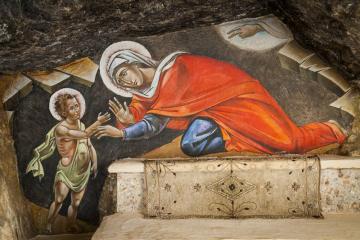 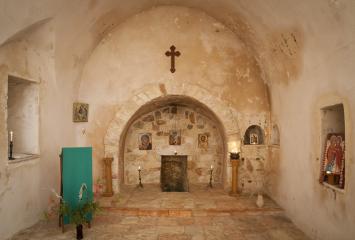 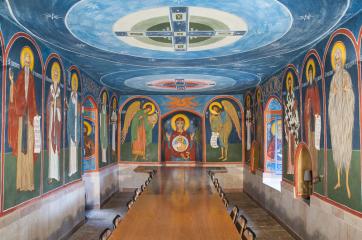